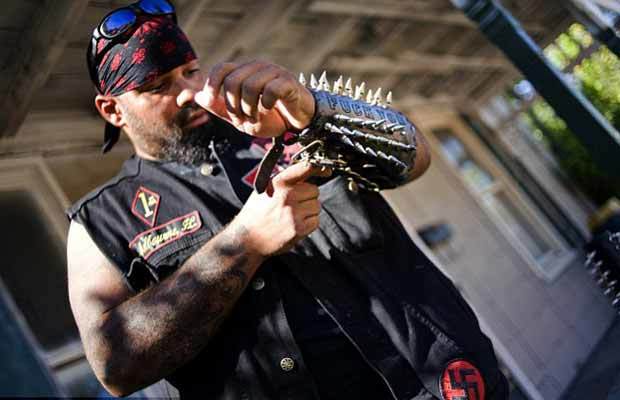 GROWING UP WITH THE “1%ERS”

|| By FAITH FALISE || With all the news lately focusing on bikers, whether it be black biker week or the shootings by biker gangs in Waco, Texas, I feel compelled to shed some light on this group of miscreants. “Biker” is a term that’s been used erroneously and interchangeably as of late, but there is a marked difference between bikers (“1%ers”) and recreational bikers.

“1%er” refers to outlaw bikers, and dates back to a statement attributed to the American Motorcyclist Association (AMA) in the aftermath of a 1947 riot in Hollister, California.  According to the outlaws, the AMA stated that “99 percent of bikers are law-abiding citizens” – implying that the remainder were not.

My mother and her cohorts lived the outlaw biker lifestyle for years.  Our home was the clubhouse for the Pagans (Hells Angels main rival in the northeast).  While most kids were going to birthday parties, I was being taught how to smuggle drugs into prisons.  My experience came hard.

Surprisingly though, I have found through social media and casual conversation that not many people have heard of this sub-set of biker known as 1%ers.  They tend to think all bikers are the same.  They are not.  1%er bikers and their cronies are notorious for human trafficking, drug manufacturing, violence, gun running, prostitution, and being henchmen for the mob.  1%ers are not part of some beneficent “community” of recreational bikers as some would posit.  And they are still as active as they ever were.

Sure, biker gangs try to craft their public relations image with bullshit charity bike runs and Toys-for-Tots events.  But make no mistake: Bikers, real 1% bikers are criminals, highly organized, highly territorial and highly profitable in their illegal endeavors.  They purposely live outside the laws of society and decency and try to fly under the radar. Similar to the mafia, a One Percenter gets their designation by murdering a rival or a snitch.  Call it vicious hazing on an unimaginable level.

While prospects get trained to be loyal gang members, women in biker gangs get “trained” to be good money makers.  Bikers use intimidation, assault, gang rape and murder on these women.  Women (or sheep, as they’re first called) get passed around between “bros.”  The women have to earn the title of being someone’s Ole’ Lady and once they do, they sport their “Property Of …” patch.  She becomes the property of the gang.  Eventually, the women get been pimped out by the gang to earn their keep or they can be sold, auctioned or gifted any way the 1%er chooses.  Human trafficking at its most base.

1%er bikers are the baddest of all the bad asses and the most insidious of all criminals.  So, readers and defensive posturers take note; know who you are defending. Defending a 1%er biker is to defend the ugly crimes which they commit.  There is a difference.

Faith Falise is a libertarian activist and author.