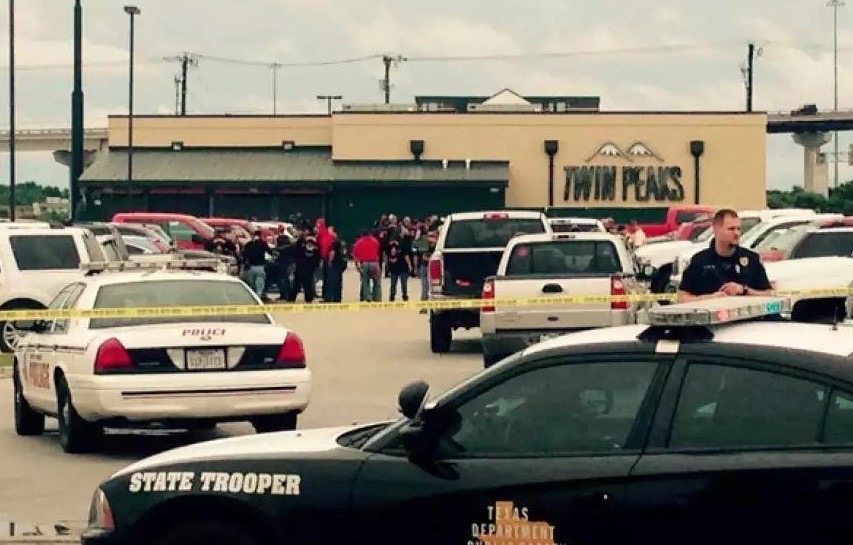 || By FITSNEWS || The numbers associated with Sunday’s biker gang shootout in Waco, Texas are staggering.  Nine people (all bikers) are dead.  Another eighteen injured.  Meanwhile a whopping 170 people have been arrested – many of them likely to stand trial for capital murder.

Over what?  Access to a parking lot … although apparently the bad blood (which led to the shed blood) dates back for years.  In fact the gangs had reportedly gathered in an effort to resolve their territorial and recruitment disputes.

According to The Waco Tribune-Herald, the deadly biker brawl began shortly after noon in the bathroom of the Twin Peaks Sports Bar and Grill – a “breastaurant” located in a shopping center in Waco.  The fight – between the rival Bandidos and Cossacks’ biker gangs – was initially confined to fists and feet, although it quickly escalated into a free-for-all involving knives, clubs, chains and (eventually) firearms.

Members of three other gangs joined the melee as it spread, and when police arrived on the scene – gang members began shooting at them, too.

Police – who were on the scene monitoring the gangs – responded to the brawl within seconds.  They fired after being fired upon, killing several bikers.

It’s not clear yet how many shots were fired – or by whom – as police have only said there was gunfire inside and outside the restaurant.  Specific information on the shootout won’t be available for some time – as police say it will take until the end of the day Monday just to finish documenting the scene of the battle.

Local cops blamed the host establishment for the outbreak of violence.

“We’ve been here over the past two months because of the problems we’ve had with biker gangs here at Twin Peaks,” sergeant Patrick Swanton told reporters. “We have attempted to work with the local management of Twin Peaks to no avail.  They have continued to allow these bikers to gather here, and this is the culmination of what has occurred.”

The owner of the establishment rejected that contention.

“Our priority is to provide a safe and enjoyable environment for our customers and employees, and we consider the police our partners in doing so,” the owner said in a statement. “Our management team has had ongoing and positive communications with the police, and we will continue to work with them as we all want to keep violent crime out of our businesses and community.”

Bond for each of the bikers has been set at $1 million apiece.  None have posted.

Along with black street gangs the Bloods and the Crips, the Bandidos were listed last year by the Texas Department of Public Safety (TDPS) as a “tier two” threat – the second highest level.

In addition to local and state law enforcement, the Federal Bureau of Investigation (FBI) and the U.S. Bureau of Alcohol, Tobacco, Firearms and Explosives (ATF) were participating in the investigation.

Located in central Texas – Waco is home to roughly a quarter million people.  It is best known as the location of the infamous 1993 Waco Siege – in which 83 Branch Davidians and four ATF agents died in a government raid on the New Mount Carmel Center northeast of the city.

Something Redeeming About Al Sharpton? Yes …