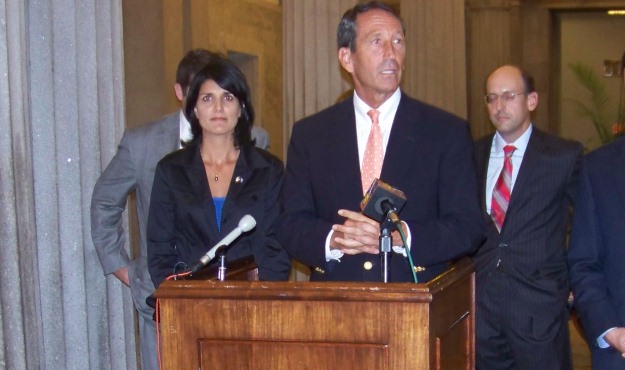 || By FITSNEWS ||  Flashback to March 2009: Then-S.C. governor Mark Sanford was in the midst of his “stimulus” battle with the administration of Barack Obama.  At issue?  A whopping $700 million in federal funding for the state – money Sanford was ultimately ordered to take by the S.C. Supreme Court.

But even though he lost the fight, the debate over accepting or rejecting the “stimulus” cash put Sanford squarely on the national stage … with fiscal conservatives hailing his principled advocacy on behalf of taxpayers.

That spring, Sanford was reaping the political rewards in a huge way …

“Sanford’s opposition to President Obama’s American Recovery and Reinvestment Act, and in particular his insistence on using up to a fourth of his state’s stimulus funds to pay down debt or refusing it outright, has fast made him a folk hero to conservatives,” one columnist wrote at the time.

“If the promise of ‘hope’ in the form of bailouts fails to revive the American economy, Mark Sanford will be the GOP’s most dangerous man in 2012,” another opined.

“A slam dunk VP choice for 2012, assuming he’s not nominated for president,” another speculated.

Sanford was hailed as the GOP’s “Goldwater Solution,” a reference to 1964 nominee Barry Goldwater.

A wave was building …

Of course we all know what happened next …

At the peak of his national influence in June 2009, Sanford went missing … and then he was found someplace a very, very long away from where he said he was.  With someone who was not his wife.  And then he completely melted down.

The dishonesty (and taxpayer waste) associated with Sanford’s sex scandal was one thing … the real debilitation was his refusal to stop navel-gazing over it in the media.  Sanford’s fall from grace didn’t just expose him as liar and a moral hypocrite, it exposed him as a narcissist … one with some serious stability issues.

In the aftermath of the scandal, Sanford managed to hang onto his gubernatorial office … thanks in no small part to some serious accommodation of the status quo forces he’d spent the first six-and-a-half years of his administration battling.

Of course those sellouts were nothing compared to what was coming …

He was correct.  Unfortunately, the message has turned out to be vastly different than the one Sanford sent during the 2009 stimulus fight … or for that matter his first go-round in the U.S. Congress from 1995-2001.

And the messenger?  In addition to much more of the same navel-gazing, the man known in the nation’s capital as “Representative TMI” has been a profound disappointment when it comes to standing firm for freedom and free markets.

Sanford – who puffed himself up as a citizen legislator – has become nothing but a corporate whore.  And a political whore.   Of course according to him, it’s all okay because he’s got Jesus on his side … and any one who dares to criticize him has problems with their soul.

Ah yes … the “divine right of kings,” a crowning hypocrisy which fits Sanford especially well given his previous efforts to brand himself as King David.

But again … don’t try to expose this guy for the fraud he is.  Such dissent cannot be tolerated.

Here’s the bottom line on Sanford: He’s always been a terrible excuse for a human being (which we’re guessing his ex-speechwriter’s upcoming book will make abundantly clear) but we – and others – routinely tolerated him.  Why?  Because despite his nauseating obsession with himself, he tended to be on the right side of the issues – especially during his first stint in Washington.

Now?  Sanford has coupled his crazy train of a personal life with a rapidly escalating betrayal of limited government ideology.  And not just any ideology, the same set of beliefs upon which he built his career.

So … is there anything of good repute left in this man?

It will be awhile before Mark Sanford’s political obituary is written.  But you’ve just read his obituary as a conservative.

US House To Take Up Late-Term Abortion Ban