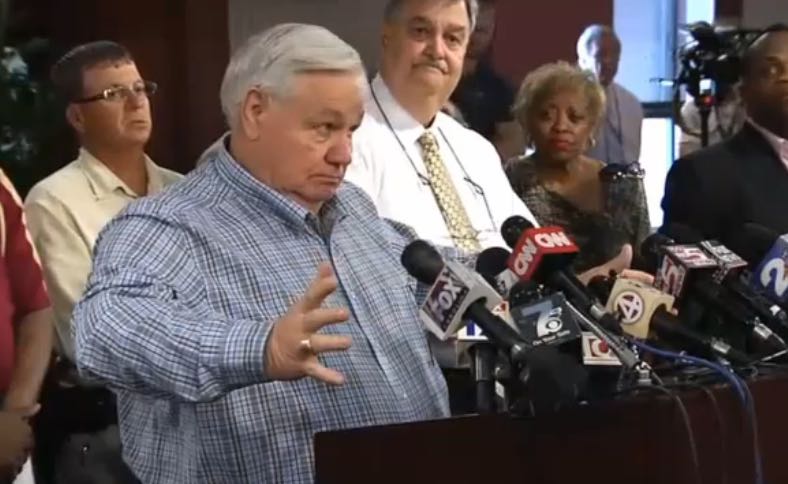 || By FITSNEWS ||  The white police officer charged with murder in the shooting death of 50-year-old Walter Scott has been fired from his job, North Charleston, S.C. officials said.  The officer – 33-year-old Michael Slager – has also been denied bond by a judge on his murder rap, meaning he will stay behind bars as prosecutors determine how to handle his case.

The incident – which has made international news – prompted a chaotic city press conference repeatedly interrupted by protesters chanting “no justice, no peace.”

Wait … isn’t justice in the process of being served?  Well, yeah … but only because an anonymous video of the shooting got leaked to a local newspaper.

And while there does appear to have been a brief scuffle precipitating the shooting, the damning video clearly depicts Scott running away from Slager at the time he was shot – eight times.  Furthermore, no CPR appears to have been administered prior to Scott succumbing to his wounds.

In announcing Slager’s firing, North Charleston mayor Keith Summey said the officer’s wife – who is eight months pregnant – will remain on the city’s insurance policy until after her baby is born.

“We think it’s the humane thing to do,” Summey said.

Summey also announced North Charleston had ordered 250 body cameras for its officers … something the city would have already done (or been required to do) had our advice been followed in the wake of last year’s officer-involved shooting in Ferguson, Missouri.

That shooting prompted violent protests … even though the facts of the case (unlike the facts in this case) appeared to justify the officer’s actions.

Protests in the Palmetto State have been peaceful … so far.

South Carolina has been home to several recent police shootings involving white officers and black victims.  For our reporting on two such prior incidents, click HERE and HERE.