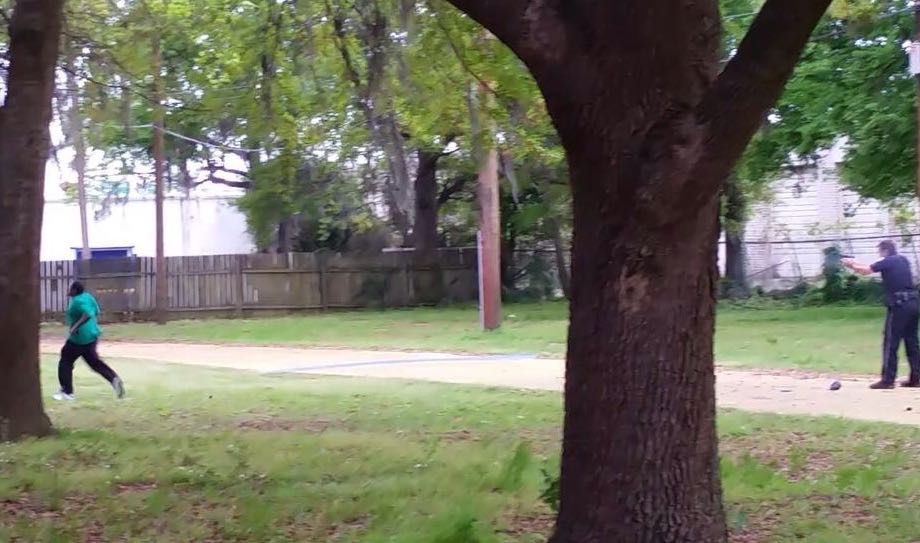 || By FITSNEWS || South Carolina has had its share of black eyes on the national stage, but this one is really going to leave a mark …

The fatal shooting of Walter Scott – a 50-year-old, unarmed black man – by white police officer Michael Slager has made international news, putting North Charleston (and the Palmetto State) on the map in the worst possible way.

And while Slager has been charged with murder in the case, it’s abundantly clear that never would have happened had an amateur video of the incident not surfaced.  In other words, the state gets “no points” on the “no justice, no peace” scorecard.

The video – obtained by The (Charleston, S.C.) Post and Courier – features an iconic screen capture (above) of Scott fleeing from Slager moments before he is gunned down.

FITS showed the video of the shooting to three different law enforcement officers – two of whom were white and one of whom was black.  Each agreed Slager’s actions constituted a “bad shot,” which is police terminology for the unnecessary use of force.

“Cops are allowed to shoot ‘fleeing felons’ under very limited circumstances,” one of the white officers told us. “From what I gather, assuming the facts are accurate, it’s a bad shot.”

Of course the specifics of the incident are only one part of the story … the real story, as far as we’re concerned, were efforts by North Charleston police to paint a vastly different picture of the incident than the one depicted in the video.  According to them, Scott was gunned down by Slager because he posed a legitimate threat to the officer’s safety.

That clearly was not the case … which is probably why Slager’s lawyer, Charleston, S.C. attorney David Aylor, dropped him like a hot potato after the video surfaced.

“After watching the video, the senseless shooting and taking of Walter Scott’s life was absolutely unnecessary and avoidable,” U.S. Senator Tim Scott wrote on his Facebook page. “My heart aches for the family and our North Charleston community.”

“I will be watching this case closely,” Scott added.

In a post on his Facebook page, U.S. Rep. Mark Sanford referred to the incident as an “unfathomable and unconscionable killing” – one which “should be met with real consequence and a thorough review.”

S.C. governor Nikki Haley wasn’t as strident as Scott or Sanford, but she agreed Slager’s conduct was “not acceptable.”

Haley did not address the issue on her ever-cheery Facebook page, choosing instead to focus her attention on the ongoing battle in North Charleston between aircraft manufacturer Boeing and the International Association of Machinists and Aerospace Workers (IAM).

Even Haley’s fellow “Republican” women criticized her lack of focus.

“Tim Scott has written a post on it and Mark Sanford, too,” GOP columnist Taylor Brown said. “But Nikki remains silent – except for one statement.  That’s unacceptable for the ‘leader’ of our state.”

More On The “Yucca Conspiracy”