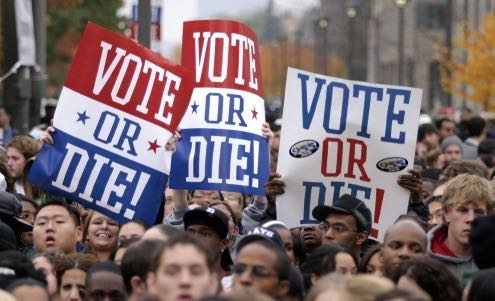 || By FITSNEWS || Remember “Vote or Die?” It was rapper P. Diddy‘s 2004 campaign to encourage young people to cast their ballots in American political elections.

Well guess what … a decade after Diddy’s “Citizen Change” organization disbanded, “Vote or Die” is making a comeback.

According to U.S. president Barack Obama, the time has come for America to consider mandatory voting.  And no, that’s not “Vote or Die,” necessarily, but it is “Vote or Be Cited/ Fined/ Possibly Jailed.”

“In Australia and some other countries, there’s mandatory voting,” Obama said this week during a speech in Cleveland, Ohio.  “It would be transformative if everybody voted.  That would counteract money more than anything.  If everybody voted, then it would completely change the political map in this country.”

Okay … but what about individual liberty?

Can government really compel its citizens to vote?

Oh … and what about the lack of anything resembling a real choice in U.S. elections?

“The people who tend not to vote are young, they’re lower-income, they’re skewed more heavily towards immigrant groups and minority groups,” Obama said.  “And they’re often the folks who are there scratching and climbing to get into the middle class and they’re working hard and there’s a reason why some folks try to keep them away from the polls. We should want to get them into the polls.”

Last time we checked Obama’s administration has been a disaster for black people.  And for middle and lower class people.  So why do poor minorities continue supporting him and his liberal allies?

Look: Civic engagement is obviously a good thing.  And the influence of money in politics is clearly a corrosive … and manipulative influence.  And nothing ever changes in either major party because the legacy media is in the tank for the powers that be, conditioned to foment meaningless “red v. blue” partisanship while glossing over the marginal differences that really exist between the two parties.

But compulsory voting?  Yeah … there’s just no way our system’s ills are ever going to be remedied by forcing people to vote.  That’s a violation of the most basic freedoms we have.

In fact our argument to those who would compel voting is simple: Try giving people a real choice as opposed to forcing them to make a false one.

Maybe that would boost turnout …