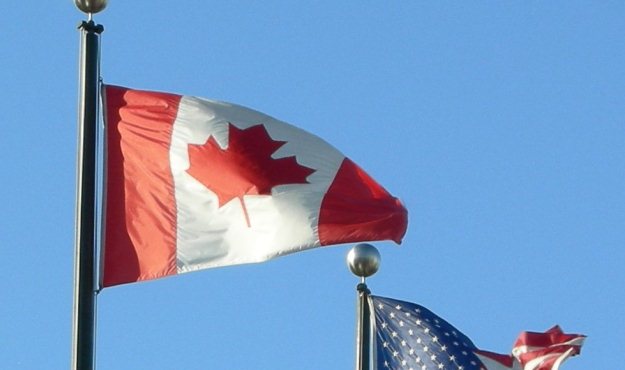 By RON PAUL  ||  In 1968 the government of Canada decided to openly admit Americans seeking to avoid being drafted into the US war on Vietnam. Before, would-be immigrants were technically required to prove that they had been discharged from US military service. This move made it easier for Americans to escape President Lyndon Johnson’s war machine by heading north.

Although a founding member of NATO, Canada did not join the United States in its war against Vietnam. The Canadian government did not see a conflict 7,000 miles away as vital to Canada’s national interest so Canada pursued its own foreign policy course, independent of the United States.

How the world has changed. Canada’s wise caution about military adventurism even at the height of the Cold War has given way to a Canada of the 21st century literally joined at Washington’s hip and eager to participate in any bombing mission initiated by the D.C. interventionists.

Considering Canada’s peaceful past, the interventionist Canada that has emerged at the end of the Cold War is a genuine disappointment. Who would doubt that today’s Canada would, should a draft be re-instated in the US, send each and every American resister back home to face prison and worse?

As Glenn Greenwald pointed out this past week:

Canada has spent the last 13 years proclaiming itself a nation at war. It actively participated in the invasion and occupation of Afghanistan and was an enthusiastic partner in some of the most extremist War on Terror abuses perpetrated by the U.S.

Canada has also enthusiastically joined President Obama’s latest war on Iraq and Syria, pledging to send fighter jets to participate in the bombing of ISIS (and likely many civilians in the process).

Though horrific, it should not be a complete surprise that Canada found itself hit by blowback last week, as two attacks on Canadian soil left two Canadian military members dead.

Greenwald again points out what few dare to say about the attacks:

Regardless of one’s views on the justifiability of Canada’s lengthy military actions, it’s not the slightest bit surprising or difficult to understand why people who identify with those on the other end of Canadian bombs and bullets would decide to attack the military responsible for that violence.

That is the danger of intervention in other people’s wars thousands of miles away. Those at the other end of foreign bombs – and their surviving family members or anyone who sympathizes with them – have great incentive to seek revenge. This feeling should not be that difficult to understand.

Seeking to understand the motivation of a criminal does not mean that the crime is justified, however. We can still condemn and be appalled by the attacks while realizing that we need to understand the causation and motivation. This is common sense in other criminal matters, but it seems to not apply to attacks such as we saw in Canada last week. Few dare to point out the obvious: Canada’s aggressive foreign policy is creating enemies abroad that are making the country more vulnerable to attack rather than safer.

Predictably, the Canadian government is using the attacks to restrict civil liberties and expand the surveillance state. Like the US PATRIOT Act, Canadian legislation that had been previously proposed to give the government more authority to spy on and aggressively interrogate its citizens has been given a shot in the arm by last week’s attacks.

Unfortunately Canada has unlearned the lesson of 1968: staying out of other people’s wars makes a country more safe; following the endless war policy of its southern neighbor opens Canada up to the ugly side of blowback.