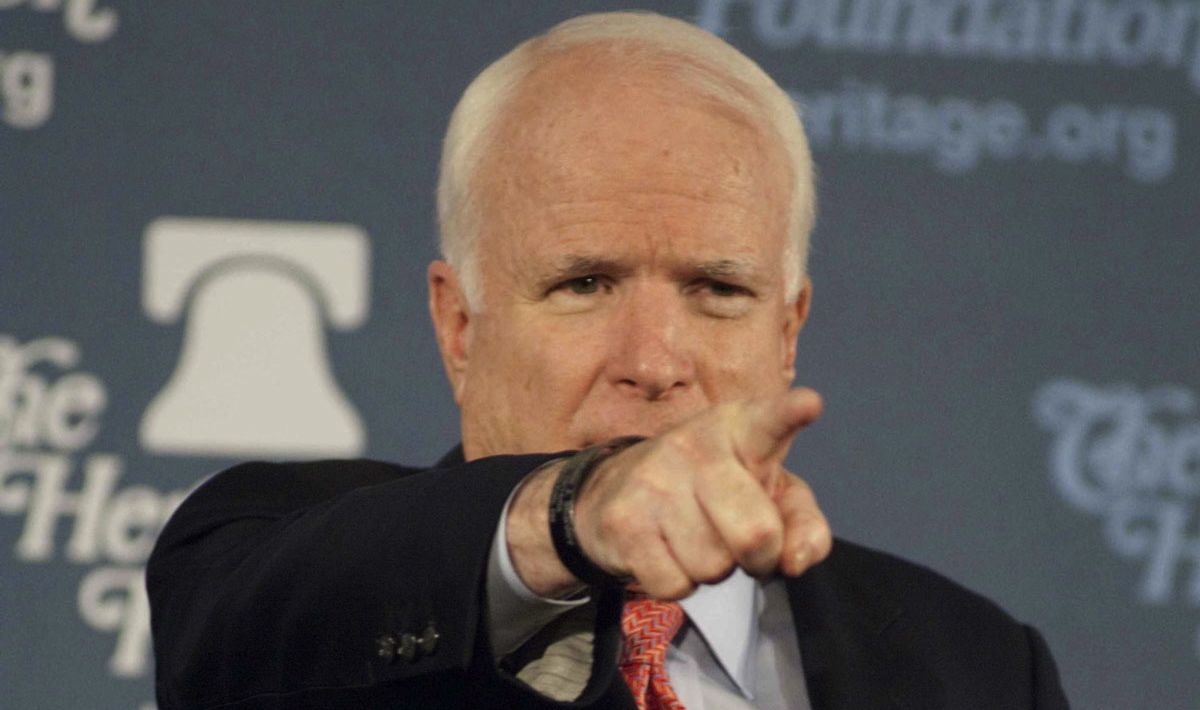 Oh, and the strange bedfellows he and U.S. Sen. Lindsey Graham have made in their effort to “make war out of nothing at all … ”

As we’ve noted ad nauseam, McCain and Graham are nothing but neoconservative whores … looking to expend other people’s blood and money to preserve their

Anyway, having been roundly rebuked in his effort to force America (deeper) into the Syrian conflict, McCain is now rattling his saber in relation to the Ukraine … ramping up the interventionist rhetoric in yet another country riddled with internal strife.

As former U.S. Rep. Ron Paul noted in this column, McCain “has made several trips to Ukraine recently to meet with the opposition” and is of the belief that the “U.S. must stand up to support the territorial integrity of Ukraine.”

“If you had to sum up John McCain’s foreign policy beliefs in a single word, that word would probably be ‘Grrrr!'” wrote Paul Waldmen for The American Prospect. “Whatever the situation is, McCain’s view is always that we should be tougher than whatever the White House is doing. This applies to both Republican and Democratic presidents. If we’re already bombing somebody, McCain’s answer to any challenge is that we should bomb harder. If we haven’t yet commenced action but are seriously thinking about it, he thinks we should start bombing. If we’re engaging in diplomacy, McCain thinks we should ditch all that talk, which is for pussies anyhow, and get ‘tough’ with whoever it is that needs getting tough with.”

There isn’t a foreign country for which McCain can’t concoct a “compelling national interest” necessitating immediate armed intervention – and naturally anyone who opposes such an intervention is soft on communism … err, terrorism (sorry, we forget the latest bogeyman).

But McCain is flat out “McWrong …”

And has been for years …

“(McCain) made every wrong judgment call that could be made after 9/11,” columnist Frank Rick wrote for The New York Times in 2009. “It’s not just that he echoed the Bush administration’s constant innuendos that Iraq collaborated with Al Qaeda’s attack on America. Or that he hyped the faulty W.M.D. evidence to the hysterical extreme of fingering Iraq for the anthrax attacks in Washington. Or that he promised we would win the Iraq war ‘easily.’ Or that he predicted that the Sunnis and the Shiites would ‘probably get along’ in post-Saddam Iraq because there was ‘not a history of clashes’ between them.”

“What’s more mortifying still is that McCain was just as wrong about Afghanistan and Pakistan,” Rich adds.

But despite his repeated misses, McCain continues to be treated as some sort of foreign policy expert – a credible critic of U.S. President Barack Obama (who, ironically, has by and large has embraced McCain’s failed interventionism).

Are we missing something here?

You can’t argue with someone like John McCain on foreign policy. Why not? Because the answer is always going to be more intervention and more weapons (a.k.a. more blood and more money). And when that fails – as such approaches have invariably failed – the answer is always to double down on the same failed approach.

Don’t get us wrong: What’s happening in the Ukraine right now is terrible.

But it’s also none of America’s damn business, as much as neoconservative whores like McCain might wish otherwise.