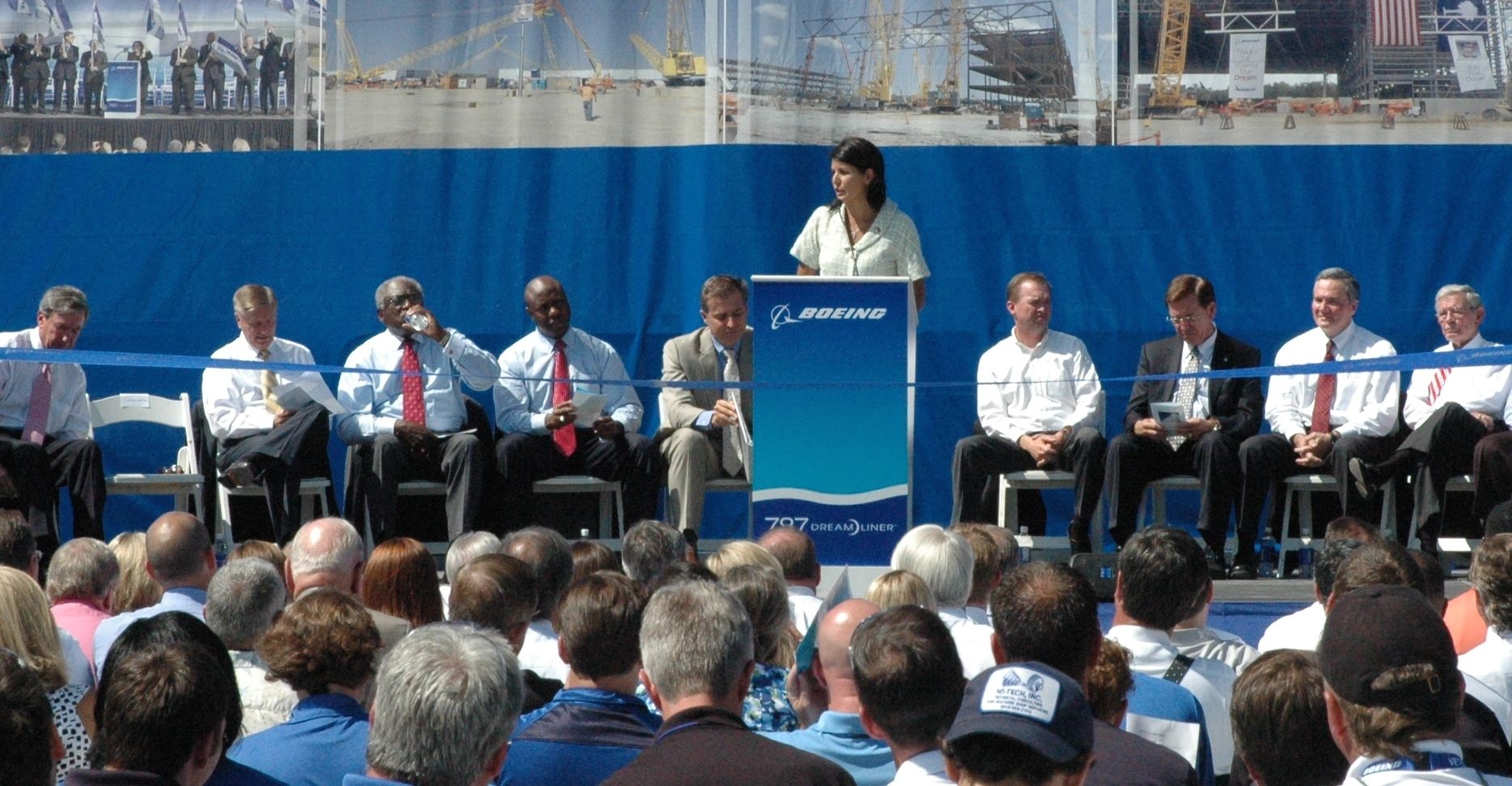 When the company says “jump,” they ask “how high?”  Or more specifically, “how much?”  This subservience has resulted in Palmetto State taxpayers coughing up more than $1 billion worth of crony capitalist tax credits to the company – which opened a manufacturing facility in North Charleston, S.C. for its 787 Dreamliner airplane in 2011.

Hell, S.C. Sen. Hugh Leatherman – who wields unrivaled power in the S.C. General Assembly – proudly refers to himself as the “Senator from Boeing.”  In fact he’s got a Boeing flag flying in his office – one he reportedly stole from the stage of the company’s big 2011 announcement.

S.C. Speaker of the House Bobby Harrell is equally subservient …

Then there’s S.C. Gov. Nikki Haley, who has slavishly kowtowed to the company at every opportunity – pimping its “mack daddy planes” as well as the crony capitalist subsidies it receives from the U.S. Export-Import Bank.

Like the problem-plagued Dreamliner itself, though, it’s been a very bumpy ride for Boeing in South Carolina … and the worst turbulence could still be ahead.

Last November, FITS published this exclusive report on problems at Boeing’s North Charleston facility – most notably workmanship and productivity issues which have since been confirmed by multiple other media outlets.

In fact here’s an updated story on these problems … which are ongoing.

But within that November 2013 report lurked another issue …

Since publishing this report, FITS has uncovered more information on Jones … as well as the drive to unionize Boeing’s South Carolina facility.  According to our sources, IAM is continuing to make inroads in North Charleston – although estimates vary as to when the union will be ready to strike.

One of our sources says North Charleston will “fall” to the union before the end of the year … although that assessment appears to be the outlier.  Most sources familiar with the situation tell FITS unionization is still a year or two away.

All agree it’s coming, though … especially if Boeing doesn’t make changes at the top.

Obviously that’s a reference to Jones – who continues to rile workers at the facility with his “distant” and “insensitive” management, which includes assigning single mothers to work the night shift at the plant – with no prior notification. 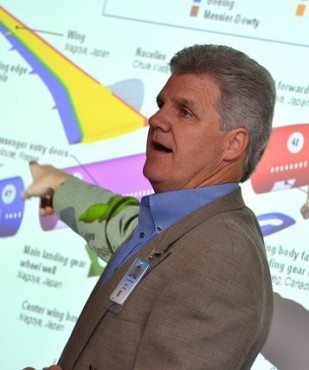 “He’s lazy and he doesn’t know how to manage,” one source familiar with the situation tells us. “He’s not treating the workforce here well at all – he doesn’t understand the culture.”

So much for that “highly collaborative management style” he bragged about during a recent speech at Gonzaga.

Part of the problem may be Jones’ attitude, but the real issue is his managerial background.

“He’s never known anything but the unions,” one source tells us. “Every other job he’s had, he’s been able to tell the union boss to ‘go fix it,’ and then blame the union boss if it didn’t get fixed.”

So … does Jones want a union presence in South Carolina?

“He doesn’t care if a union comes in,” our source said. “He doesn’t see the problem.”

Of course while Boeing’s South Carolina employees have a burning desire to see Jones shipped off, their intensity reportedly pales in comparison to Jones’ desire to get the hell out of the Palmetto State.

“His view is ‘how soon can you get me on a plane,'” a source close to the embattled manager tells FITS. “He doesn’t want to be in South Carolina one second longer than he has to.”

So why is he still here?

That’s a good question … one Palmetto State leaders are starting to ask each other, albeit quietly.

“There is concern this guy (Jones) is hastening unionization of the facility,” one lawmaker told us confidentially.

South Carolina leaders do not dare publicly question – let alone challenge – Boeing, though.  Not on personnel … not on anything.  Even though they have forced Palmetto taxpayers to subsidize the company’s operations to an unprecedented extent, the company still dictates the terms in all its interactions with government officials.

“Nobody’s bucking Boeing,” one source told us. “Especially during an election year.”

Still, seeds of dissent have been planted … and Boeing-related rifts are growing within the South Carolina legislature.

“A billion dollars ought to buy us some say in the direction of the facility,” one frustrated State Senator told FITS.  “But they got the (Senate) president and the governor and the Speaker all in their back pocket – so we all fall in line.”

Which brings us to the scariest part of this story:  A billion dollars later – with serious production issues plaguing the North Charleston facility and the specter of unionization looming over the plant – no one seems to be doing anything to solve Boeing’s Palmetto problems.

Least of all Boeing …