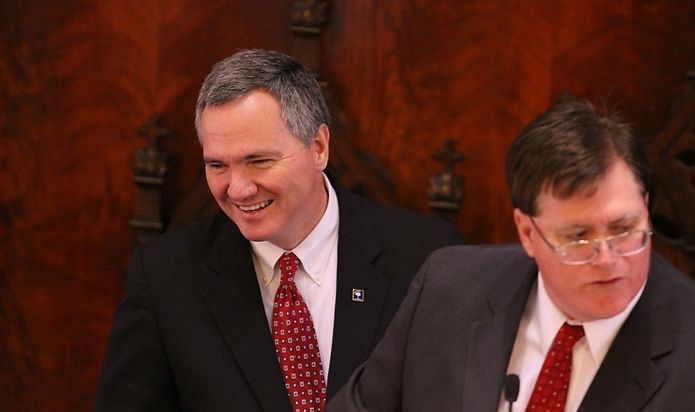 It’s no big secret that S.C. House Speaker Bobby Harrell (RINO-Charleston) is as corrupt a politician as South Carolina has ever seen. Hell, we’ve been calling for him to step down for over a year in response to his various self-serving shenanigans …

Here’s what we know: In September 2012, Harrell was busted reimbursing himself more than $325,000 from his campaign account for dubious flight-related expenses (Harrell is a pilot). He later admitted his guilt by returning $23,000 of these reimbursements – although a proper accounting would have likely resulted in tens of thousands of dollars in additional reimbursements. Harrell also stands accused of applying improper pressure on the S.C. Pharmacy Board and the S.C. Department of Labor, Licensing and Regulation (SCLLR) on behalf of his pharmaceutical business – using his official letterhead, no less.

Beyond that, his political action committee is under investigation for allegedly misappropriating and misreporting funds – including an effort to force taxpayers to pay hundreds of millions of dollars on an unnecessary transportation project.

And that’s just the corruption we know about …

Of course it’s not just that Harrell is a dirty dealer – he compounds his corruption with equally devious attempts to evade accountability.

First he lied and refused to release his records. Then he assassinated the character of one of the reporters investigating him – strong-arming her newspaper into backing down by allegedly threatening to withhold an annual $12 million bribe given by the S.C. General Assembly to the newspaper industry.

Peach of a guy, huh?

Despite his machinations, Harrell is currently the focus of a statewide grand jury convened by S.C. Attorney General Alan Wilson – and it’s becoming clear things aren’t going his way.

According to reporter John Monk of The (Columbia, S.C.) State newspaper, Harrell’s attorneys – including Charleston lawyers Gedney Howe and Bart Daniel – are attempting to meet in secret with circuit court judge Robert Hood in an effort to persuade him to remove Wilson from the case.

“A secret decision by a lone judge in a hearing closed to the public that resulted in disqualifying South Carolina’s top elected prosecutor from prosecuting a high-profile case against one of the state’s most powerful politicians would be unprecedented,” Monk writes.

Wilson’s office told Monk that it strongly opposes “both the request for a closed hearing and any disqualification of the attorney general.”

As we’ve noted on numerous previous occasions, there is nothing to suggest Wilson hasn’t been conducting this investigation – like his previous public corruption cases – with the utmost integrity. As far as we can tell, his reputation as a boy scout who is impervious to the shady deal-making at the S.C. State House complex is well-earned.

Our hope is that Harrell is seeking to remove Wilson from the case because Wilson has the goods on him and is preparing to drop the hammer … not some other reason.

Whatever is behind Harrell’s latest ploy, one thing is clear: Any hearing involving the potential removal of Alan Wilson as the lead prosecutor on Harrell’s corruption case must be held in public, not behind closed doors as Harrell’s lawyers have suggested.