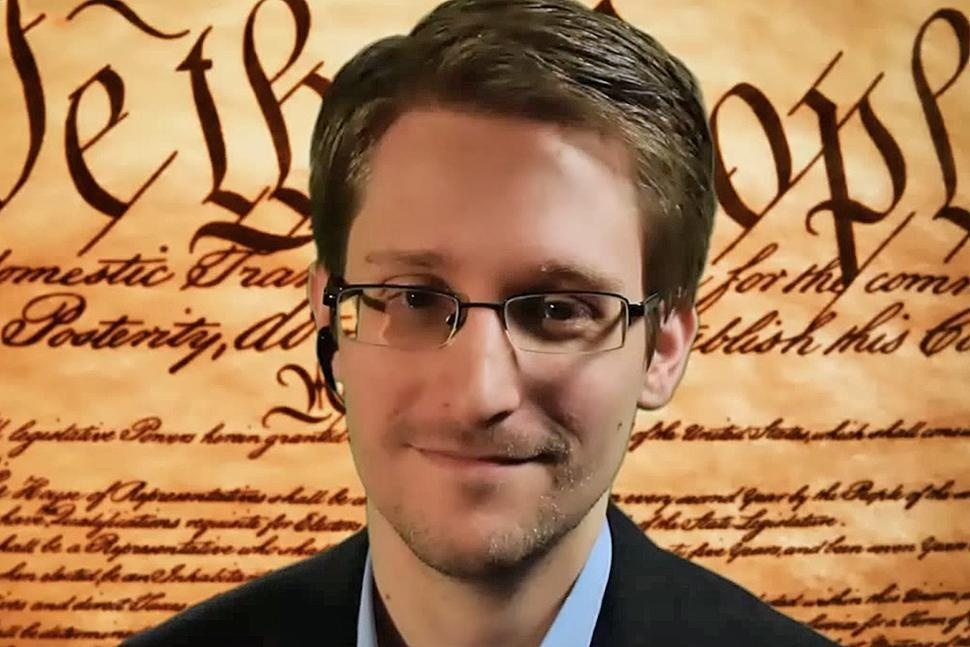 Speaking from Russia – but framed by an image of the United States Constitution – former National Security Agency (NSA) contractor Edward Snowden addressed thousands of technology leaders at the annual South by Southwest (SXSW) Interactive Festival in Austin, Texas this week.

The appearance of Snowden – whose heroic exposure of the NSA’s domestic spying network made him America’s No. 1 most wanted fugitive – was rebuked by several U.S. Congressmen. In fact one of them – U.S. Rep. Mike Pompeo of Kansas – urged SXSW not to permit him to speak, arguing that Snowden’s “only apparent qualification … is his willingness to steal from his own government and then flee to that beacon of First Amendment freedoms, the Russia of Vladimir Putin.”

First of all, government is the thief here – stealing our information and our liberties with neither permission nor justification. And as for the irony of Snowden being forced to camp out in Russia, perhaps Pompeo should consider what happened to America’s “beacon” of freedom before attacking Putin’s.

“I would say South by Southwest and the technology community – the people who are in Austin right now – they’re the folks who can really fix things, who can enforce our rights through technical standards even when Congress hasn’t yet gotten to the point of creating legislation to protect our rights in the same manner,” he said.

“You guys who are in the room now are all the firefighters,” Snowden added. “And we need you to help fix this.”

Snowden said gadget-makers, app-writers, operating system inventors and other technology innovators needed to build on the progress being made with regard to data encryption technology – in which plain text data exchanges are encoded using an encryption key and then deciphered by authorized users using secret decryption keys.

“The bottom line … is that encryption does work,” he said.

And assuming encryption technology continues to make what Snowden termed “a lot of progress,” it could eventually render government mass surveillance activities too expensive and time consuming to conduct.

Speaking of encryption, precautions were clearly taken to protect Snowden – who according to event organizers used seven “proxy servers” to disguise his location. The result was a slow, often garbled or distorted audio feed – and a video feed that frequently froze mid-sentence as Snowden was speaking.

But the message was clear … America’s foremost advocate for individual liberty has no regrets.

“Would I do it again? Absolutely. Regardless of what happens to me, this is something we had a right to know,” Snowden said. “”I took an oath to support and defend the Constitution. And I saw the Constitution was being violated on a massive scale.”

“They’re setting fire to the future of the Internet,” Snowden said of his former employer, the NSA. “We need public advocates. We need public oversight. Some way (to have) trusted figures, sort of civil rights champions to advocate for us, to protect the structure. How do we fix our oversight? How do we structure an oversight model that works? The key factor is accountability.”

However if hypocritical “national security” liberals and war-mongering “neoconservatives” only pay lip service to this issue … there will be little “accountability” to be had.

Which means more radical measures will be required.

To watch Snowden’s remarks in their entirety, click on the video below …

What do you think of Snowden? Vote in our poll and post your thoughts in our comments section below …