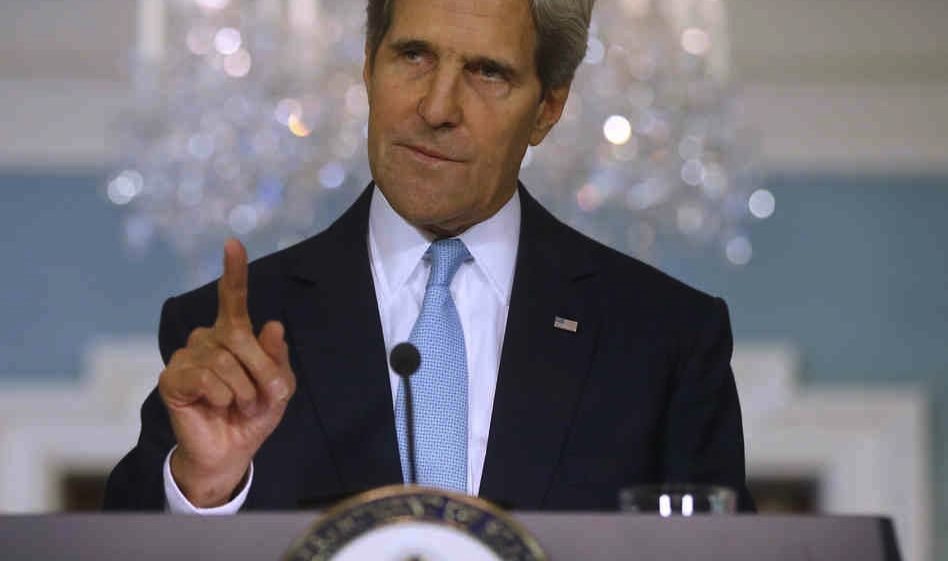 U.S. Secretary of State John Kerry is so desperate to sell an American military intervention in the Syrian civil war that he’s actually beginning to make a compelling case against it.

Kerry’s latest talking point? That any military action against the regime of Bashar al-Assad would be “unbelievably small.”

“We’re not talking about war, we’re not going to war,” Kerry said during a visit to London. He then went on to describe the conceived U.S. military action against Syria as a “limited, very targeted, very short-term effort.”

Our point? “What’s the point,” then? Seriously, talk about getting all of the bad and none of the good.

So to recap Kerry’s “just the tip” interventionist foreign policy, we should launch a preemptive military assault against another sovereign nation absent popular support, the backing of our allies and in spite of clear warnings from our military leaders … needlessly stoking anti-American extremism and making our nation less safe …  for … what, exactly?

In addition to being ill-conceived from a national security standpoint, such a statement is politically stupid. After all it’s not the size of the intervention we object to – it’s the fact we are intervening in Syria at all. In fact such a bone-headed assertion has the potential to backfire on the Obama administration, eroding support amongst his warmonger allies in Congress while gaining the president absolutely nothing among the non-interventionists.

What Happened To Vic Hampton?

It’s interesting how these “unbelievably small” military actions can get out of hand. Ninety-nine years ago last month, Austria-Hungary was going to chastise Serbia for misbehavior in Bosnia-Herzegovina. Four years and sixteen million dead later the issue was moot. I’m still waiting to see the flower-strewn welcome in Iraq promised by Donald Rumsfeld.

It’s interesting how these “unbelievably small” military actions can get out of hand. Ninety-nine years ago last month, Austria-Hungary was going to chastise Serbia for misbehavior in Bosnia-Herzegovina.

It’s a CIVIL war. Let them work it out themselves. I’m sorry about the refugees and the civilian deaths, but let the “world community” handle those, too. Or the oil-rich arab nations. Anyone but us.

Like Obamacare is going to cover the uninsured, premiums will stay low, you get to keep your same health insurance benefits and doctor, your health and personal information is secure, government employees and unions will be in the same pool and have the same choices, there are no “death” panels AND no we are not on the road to universal healthcare!

There is another one about oral sex but Mr. Folks is trying to clean up this act.

Obama and his gang are the “Gang who can’t shoot straight”, with the truth, domestic policy, or foreign policy.
Just like our Nikki and her gang. The truth is non existent, transparency is non existent, and incompetence, as well as screw ups are the rule of their governance!
Obama should have NEVER been re-elected!
Let us not make the same mistake here with Haley!

Btw, Kerry(and naturally Obama) already threw the idea of obeying the Constitution and potentially Congress after a vote overboard:

Let’s give Obama another peace prize!

“Perpetual war for perpetual peace!”
“Hope and Change! Ok, how about just hope?”

Oh come on now, we’ld be getting change and you know it! From peace (relative) to WAR (definative).

If that picture of Will in the Buzz Lightyear getup isn’t a photoshop, I will say that you are definitely wrong. That ain’t no baby gherkin, thas horseco…..

Pro Tip ;
Putting a cucumber (or potato) in one’s Speedos will get a great deal of attention from the ladies at the beach. It is extremely important, however, to place the cuke (or spud) in the FRONT…

Potatoes work good. Avoid large melons, however, as they look more like a tumor.

The humor and wit posted daily on Fitsnews is the only thing helping me to maintain both my sanity and mental balance.. Hmmm, or is it “humorless wit” — or “witless humor” …..

sex for one…half a doozy of the other.

I refer you back to the prancercise article and the separate video where the girl shows how to make a cameltoe – and why!

TBG heard , that as they were frantically making out in the darkened vehicle, Our Founding Editor surreptitiously pulled *it* out and then placed her hand on *it*. At which point, Haley reportedly stated, “No thanks, I don’t smoke.”

Thanks for remembering my joke, and excellent editing on your part. Part(?) — did I actually use that word?

Ketchup Woman adds “It will be eensie iensie. Like what you get when you turn a bottle of Hienze upside down.”

Maybe. But the anticipation is making us crazy.

Unbelievable would be for Congress to vote yeas on attacking Syria. The Republicans will lose big time because they need us Independents to even stand a chance and Independents are not stupid enough to buy into anything Kerry,Hillary or Obama has to say!

What makes me think you are not really an independent?

Only you know that !

Otter : “What this calls for is a futile and stupid gesture on someone’s part.”
Blutto: “And we’re just the ones to do it.”

Just give Obama and Kerry (and while we’re at it, McCain and Graham) a parachute and a rifle and drop them off next to the Syrian border. Unbelievably small military action? Check.

If TBG remembers correctly, the following sentiment has already been expressed (by Frank Pytel? )…
…but do we really need to use parachutes?

Mr. President: In 2009 you were given a Nobel Peace Prize with the statement that it was that “for your extraordinary efforts to strengthen international diplomacy and cooperation between peoples”.

Mr. President: How do you reconcile that 2009 statement with your current comments calling for a new war which will mire America in another eternal military conflict?

Mr. President: How do you reconcile that 2009 statement with your foolish attitude that murdering President Assad is more important to you than offering the humanitarian aid for the two million Syrian refugees, and for which you are silent?

Mr. President: How do you reconcile that 2009 statement with your actions and comments coming from your moral weaknesses and frailties which have lessened America’s standing in the international community?

Mr. President: Where can you show that there is clear and convincing evidence that the situation in Syria is a direct and urgent threat to the national security of America, and that Syria will not retaliate against American Citizens on American Soil?
===========================

When I copied and pasted from my letter, all of the emphasis vanishes, and I don’t know how to put them in – italics, bold, and underline. Anybody who can clue me in? Thanx,,,,

(i) whatever you want italicized (/i)

(strike) whatever you want struck (/strike)

To create a hyperlink….

I can’t show you with the “” because HTML will do it’s thing.. but for example:

Thanks for the info – don’t fully understand it, but will play around with a fake post to see what it does – tonight…..

Just copy and paste “(i) whatever you want italicized (/i)” into the comment box and change the “(s” ” to “s”, respectively. Then hit Post as Shifty Henry.

whatever you want italicized three

whatever you want boldly three

whatever you want underlined three

Thanks, TBG – I think I finally got it for the most part, but still need to play with it. It’s not as simple as just copying something to another word document.

You get TBG rocks!

Kerry Shocked to Be Taken Seriously

WASHINGTON (The Borowitz Report) — Secretary of State John Kerry said today that he was “shocked and flabbergasted” that the Russians heeded his suggestion about Syria’s chemical weapons, telling reporters, “After four decades in public life, this is the first time someone has taken me seriously.”

“Whether as a senator, a Presidential candidate, or Secretary of State, I’ve devoted countless hours to thunderous and droning speeches that people have consistently tuned out,” he said. “So naturally, to be listened to all of a sudden came as something of a shock.”

But after the novelty of not being ignored wore off, Mr. Kerry said, the Russians’ assertion that he had said something worth paying attention to “seemed like a trick.”

“You mean to tell me that after decades of spewing mind-numbing rhetoric I all of a sudden blurted out an idea worth acting on?” he said. “It doesn’t pass the smell test.”

At the White House, spokesman Jay Carney welcomed the Russians’ engagement in the Syria crisis, but warned that “further actions based on John Kerry’s remarks will not be tolerated.”

“We ask the Russians to be constructive participants in this process,” he said. “And taking John Kerry seriously is a clear violation of international norms.”

Kerry must be talking to Nikki — he likes her magical pointing finger!

That’s what she said.
(sorry, couldn’t help it)

Damn, I should read the posts first. Sorry, thought I was being original. I’m unique, just like everyone else.