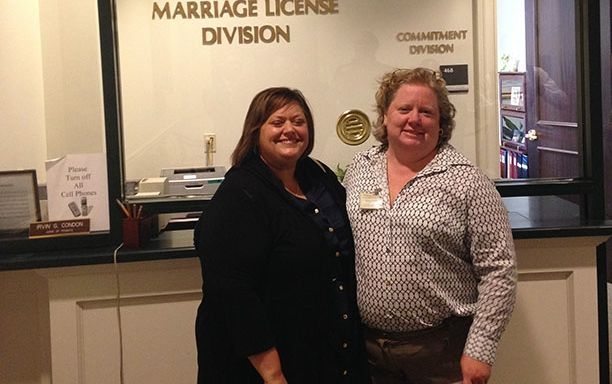 TAXPAYERS SHOULDN’T HAVE TO PAY TWICE FOR THIS CASE …

By FITSNEWS || This website has been adamant in its opposition to government’s intervention in the institution of marriage – which we believe to be the exclusive purview of individual churches.

Gay, straight or plural … government should neither compel nor condemn churches when it comes to performing marriages.

What should it do?  Stay the hell out it … and let individual congregations decide.

We do have serious reservations, though, regarding Gergel’s decision to take the case in the first place.

Last month, FITS reported on a schism within South Carolina’s lesbian, gay, bisexual and transgender (LGBT) community over the handling of the same sex marriage issue in the Palmetto State.  You can read that report HERE, but it basically boiled down to one lesbian couple getting shoved off stage by another … and one judge (Gergel) trumping another.

Doing the shoving?  Colleen Condon, a corrupt Charleston County councilwoman who was still in the closet as recently as last spring.  Nonetheless, Condon and her partner – Nichols Bleckley – got their wish.  They became the faces of the gay marriage debate in South Carolina when they filed a lawsuit before Gergel’s court on October 15.  Never mind that there was already a pending challenge of South Carolina’s gay marriage ban –  Bradacs v. Haley – sitting before another judge in the same district.

Certain segments of the LGBT movement were tired of waiting …

Oddly enough, Condon and Bleckley – who at one point refused to wait even twenty-four hours for Gergel’s ruling to take effect – have yet to set a date for their wedding.

According to our sources, Gergel “egged them on,” evidently knowing full well his fellow district judge Michelle Childs was preparing to rule on the Bradacs  case.

Should he have done that?  We don’t think so.  Not only did the Bradacs  case sufficiently address the core constitutionality (or lack thereof) related to the South Carolina ban, but one of Condon and Bleckley’s attorneys was Gergel’s former law partner – meaning his decision to reach on this case benefited a former colleague.

Now Gergel is being asked by his former law partner Malissa Burnette – and Condon and Bleckley’s other attorneys – to cut checks from the taxpayers in the amount of $153,000 for “legal fees,” not a bad sum for a couple weeks pushing paper on a case that was decided before it was even filed.

Should they get that money?

Don’t get us wrong, we disagree with the decision by S.C. Gov. Nikki Haley and Attorney General Alan Wilson to expend taxpayer resources defending South Carolina’s gay marriage ban – but forcing the state to pay both sets of lawyers is ridiculous.  And it’s especially ridiculous in this case – which Gergel should have declared superfluous and deferred to his colleague on the federal bench who was already preparing to rule on the matter.

Just because he declined to do that in an effort to advance the gay marriage timetable by what wound up being only a few days doesn’t mean taxpayers should be out $153,000.

The Politics Of Racial Shootings