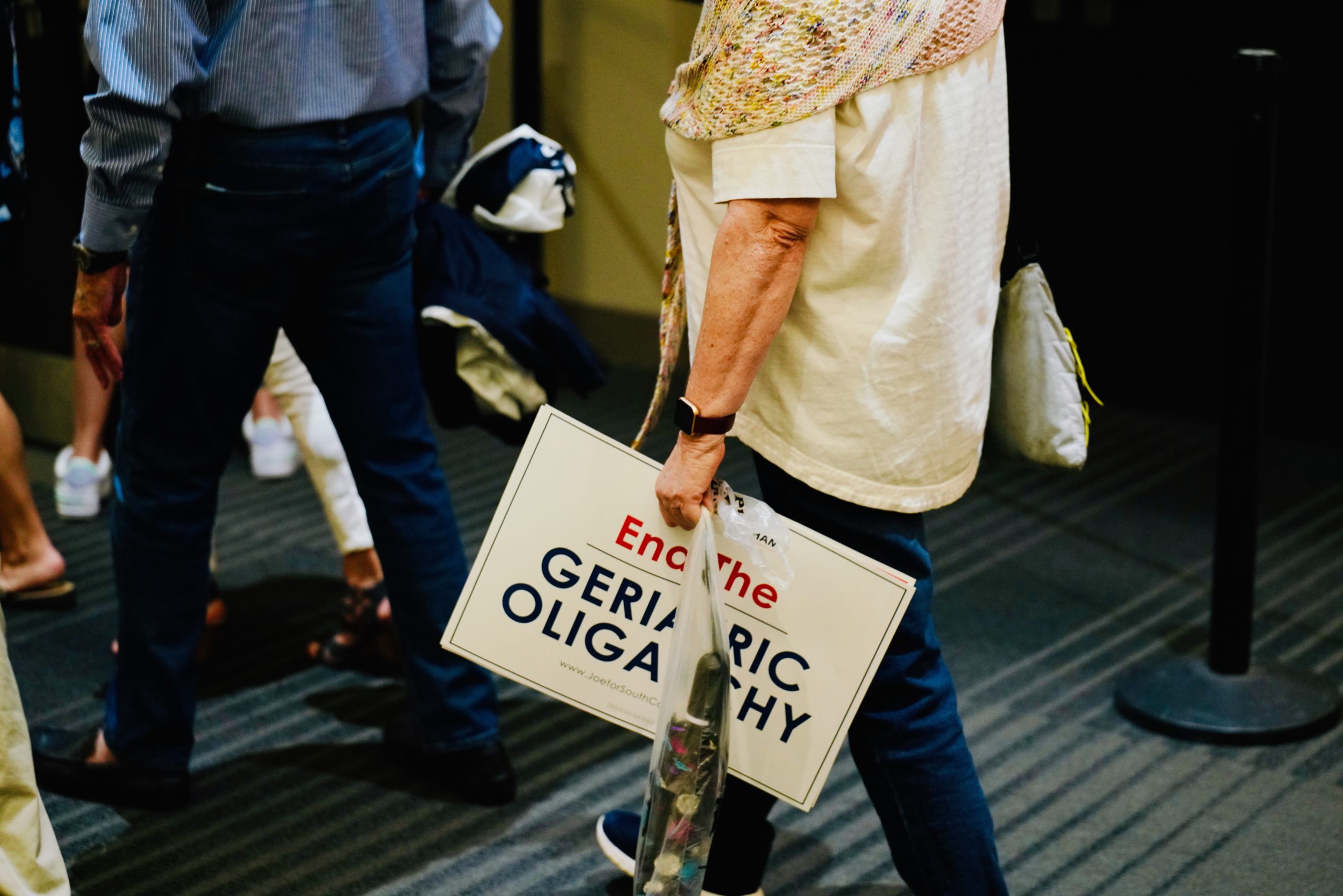 I have already addressed the bizarre new campaign slogan unveiled by Joe Cunningham in his Quixotic bid for governor of South Carolina: “END THE GERIATRIC OLIGARCHY.”

No really … I am not kidding.

Cunningham’s slogan was exceedingly ill-advised when you consider the leader of his own party is currently serving as America’s poster geriatric. In other words, in his bid to assail 75-year-old “Republican” governor Henry McMaster, the former “ocean engineer” also hit 79-year-old Joe Biden – as well as 82-year-old U.S. House speaker Nancy Pelosi (who recently had a senior moment regarding the Shanghai Communiqué), 83-year-old Democratic majority leader Steny Hoyer and 82-year-old majority whip Jim Clyburn.

“That’s a nursing home,” I noted in the latest installment of our popular ‘Week In Review’ program.

Which is frankly where Biden belongs, if you ask me …

(Via: Will Folks/ FITSnews)

But as Cunningham endorses age limits on politicians as part of his war on the “geritocracy,” is he creating an electoral problem for himself?

In other words, is he pissing off the very group of South Carolina citizens most likely to vote in the 2022 gubernatorial election?

According to data from the S.C. Election Commission (SCVotes.org), yes. He absolutely is. For those of you keeping score at home, 550,517 (or 32.2 percent) of the 1.71 million South Carolinians who voted in the last non-presidential general election were over the age of 65. That’s right: One in three general election voters in South Carolina is a senior citizen (or was during the last election).

Obviously, not all of those voters are necessarily opposed to Cunningham’s “END THE GERIATRIC OLIGARCHY” shtick – but big chunks of that electorate could easily be inspired to oppose it via a well-conceptualized, well-targeted independent expenditure campaign from McMaster backers.


Bottom line? This was a totally unnecessary, unforced error by an immature, impulsive candidate – one who thinks the rules of electoral gravity do not apply to him. I guess when you waltz through life telling “your truth” (aided and abetted by sycophant cheerleaders in the mainstream media) … the actual truth becomes somewhat difficult to discern.

To be clear: Cunningham never had a chance in this election. His path to victory was always nonexistent – and that was before he alienated black voters during a contentious Democratic primary (and then re-alienated them by choosing a white running mate for the general election).

Seriously … does this guy not understand that political campaigns are won by securing one’s base and then playing the game of addition?