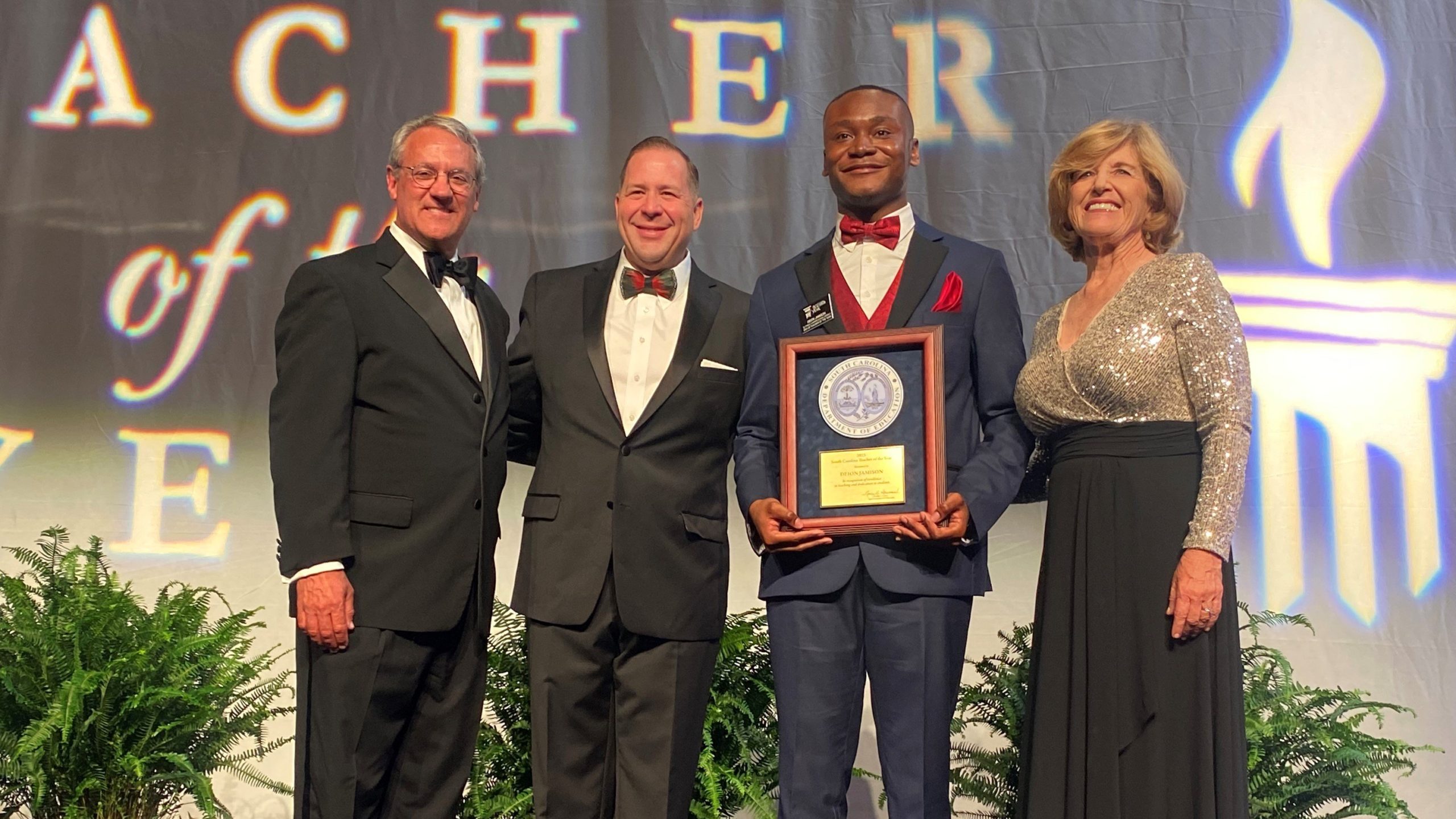 So did the state’s mainstream media …

Jamison, of Orangeburg, S.C., was hailed for his work as an English teacher at Legacy Early College in Greenville, S.C. – part of the state’s network of “public” charter schools.

“Deion exhibits the qualities and characteristics that we want to see in every current and future South Carolina educator,” Spearman said in a release touting Jamison’s victory. “He is so deserving of this tremendous honor.”

Spearman’s release went on to say Jamison teaches students in his classroom “collaboration, critical thinking, and problem solving to address the world’s most pressing issues.”

McMaster also touted Jamison’s work and accomplishments – using the occasion to call for raises for teachers.

GOP state senator Greg Hembree wrote that he was “honored to introduce” Jamison (above) in the S.C. Senate.

“Our state is blessed to have so many gifted and dedicated educators serving our young citizens,” Hembree said in introducing him.

Jamison, incidentally, will receive a $25,000 bonus and a brand new BMW along with his award.

The only problem? Jamison – who also goes by Deion Michael – is a staunch proponent of critical race theory (CRT), a radical and divisive brand of instruction which was supposed to have been outlawed in South Carolina classrooms. A self-proclaimed “disruptor,” Jamison has also offered up some pretty incendiary comments in and out of the classroom – calling into question the state’s claim that he believes in teaching “collaboration.”

“We know that the south, especially South Carolina is deeply rooted in racism and anti-blackness,” he wrote. “To undermine the work that southern progressives have been putting in is criminal. We have been working hard as hell to create a new south, and although the results are not immediate, progress has definitely been made.”

“We are putting a dent in these red states, y’all!,” Jamison added. “And don’t let northern ‘progressive’ states fool you; remember they only wanted to abolish slavery because it didn’t benefit them.”

“The anti-looting, anti-riot rhetoric is inherently white supremacist,” the post noted. “There’s no ifs, ands or buts about it. Rioting/ looting is a political action and has been used for thousands of years in societies all over the world. Rioting is a form of revolution. Revolution is romanticized and revered, EXCEPT in the cases of African-Americans; the entire fabric of American society is woven of white dominance.”

Really? Tell that to the family of David Dorn.


Certainly I am not disputing Jamison’s right to believe what he wants – and express what he believes as he sees fit. And as our director of special projects Dylan Nolan noted in this expansive piece on CRT last month – Jamison and other provocateurs are not without foundation for their arguments.

“South Carolina has a history of racial inequality that runs deep,” Nolan noted. “This history must not be ignored.  Students, black white and otherwise, must be made aware of the horrors and indignities inflicted upon generations of black and native American South Carolinians.”

But that past is not our present. Furthermore, I reject the central tenets of CRT “prophets” like Ibram X. Kendi, who teach that present and future racism against white people is acceptable in light of racism perpetrated against black people in the past.

In other words, two wrongs make a right.

Jamison is a Kendi disciple. In fact, he has made no secret of his desire to inject Kendi’s teachings into his classroom, saying his book – Stamped: Racism, Anti-Racism, and You – would “lay the foundation for building an antiracist and critical conscious framework as we digest other pieces of literature throughout the school year.”


“The Black Lives Matter movement has to be more than social media activism and protests (and these are equally important,” Jamison wrote in July 2020. “We have to attack systemic racism from all angles. My activism is in the classroom.”

You read that right … “my activism is in the classroom.”

In a follow-up post, Jamison wrote “we about to get real disruptive in English this year,” accompanying his post with a clenched black fist and black heart emoji.

“I will be launching another fundraiser soon to acquire more antiracist materials to empower my scholars,” he wrote in a follow-up post.

According to a proviso inserted into the fiscal year 2021-2022 state budget, government-run schools in the Palmetto State have been expressly forbidden from teaching CRT. The relevant proviso (1.105) specifically addressed “partisanship curriculum,” and enjoined districts and schools from using taxpayer dollars to “provide instruction in, to teach, instruct, or train any administrator, teacher, staff member, or employee to adopt or believe, or to approve for use, make use of, or carry out standards, curricula, lesson plans, textbooks, instructional materials, or instructional practices” in multiple categories.

Per the language of the proviso, which went into effect on July 1, 2021, those categories included the following concepts …

Jamison has been openly flouting this law – and doing it in the name of so-called “action research.”

“I was able to conduct action research in my classroom about the effects of reshaping a white-centered curriculum using the principles of culturally responsive pedagogy,” he recently wrote on his Instagram page. “My kiddos were able to use the knowledge gained to critical examine traditional literature and challenge whiteness.”

“Challenge whiteness?” Does that sound in any way, shape or form “collaborative” to you?

Not surprisingly, precisely none of Jamison’s radical musings made its way into the mainstream media coverage of his Teacher of the Year award. Or the GOP fawning over his selection.

I have consistently argued that such overt, divisive indoctrination has no place in Palmetto State classrooms. Certainly, we cannot (and should not) gloss over the sins of our nation’s past – or neglect to tell the stories of those civil rights leaders whose courageous advocacy unleashed a rebirth of freedom in our country.

And real racism and injustice – including what happened to Floyd – must always be called out.

But critical race theory distorts our present – unfairly assigning blame, perverting perceptions and seeking to sow division among our children.

That is the sort of “critical” thinking I will always advocate for … but I will also always open my microphone to those with differing views.

Former Bank CEO Russell Laffitte Has Checked Himself Into Jail

National Nikki … Is Back?