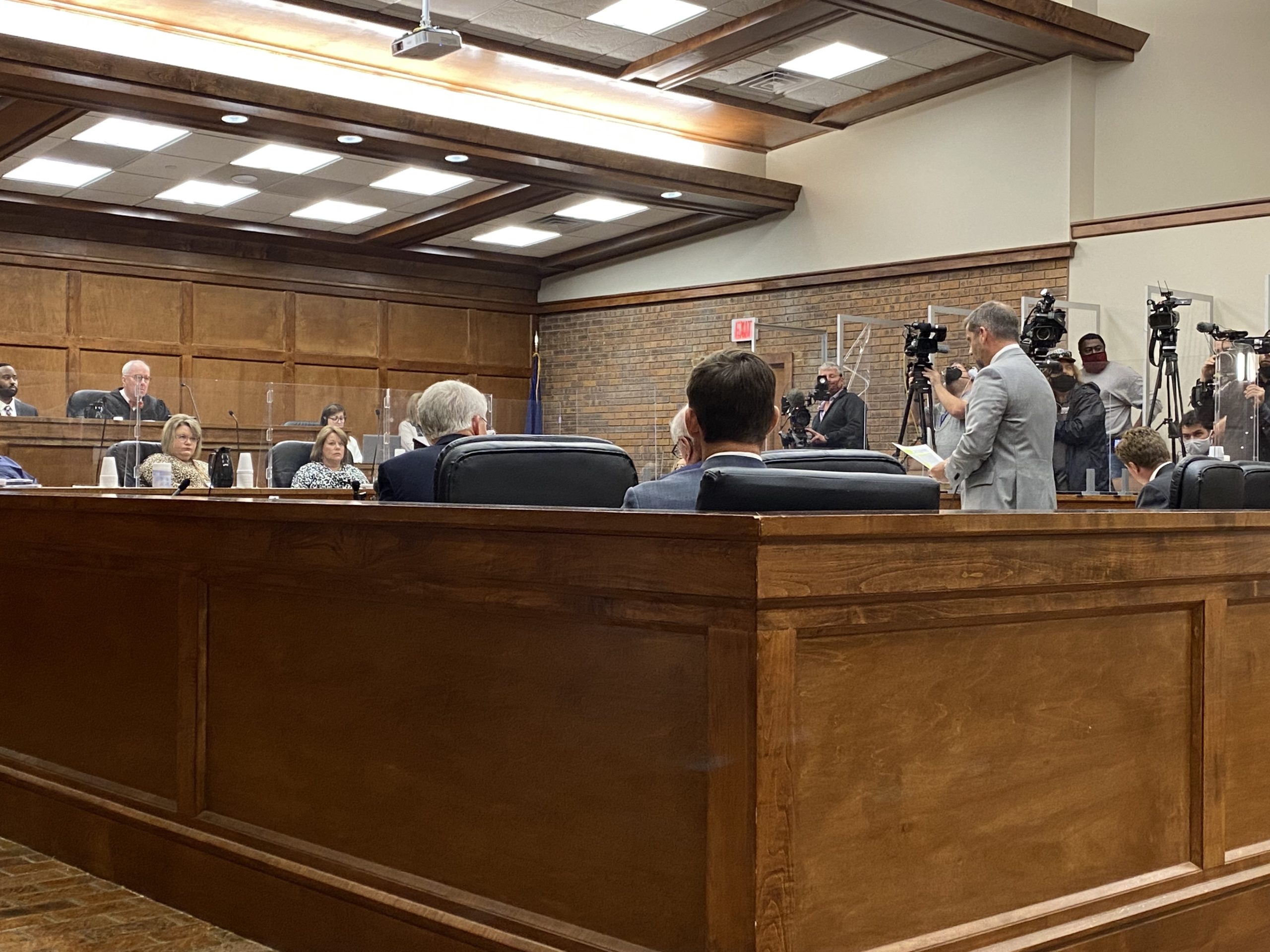 Hall announced that he will make a decision on the Murdaughs’ assets next week.

The hearing was held a week after attorneys Mark Tinsley, Joe McCulloch and Eric Bland — who are all representing victims in the Murdaugh Murders saga — filed bombshell motions to lock up Alex and Buster Murdaugh’s assets and appoint receivers to manage those assets.

Tinsley, McCulloch, and Bland all attended the hearing, while Alex Murdaugh’s high-priced defense attorneys Dick Harpootlian and Jim Griffin did not make the trip to Chesterfield County Friday.

No members of Murdaugh’s family appeared to be present during the court hearing. Alex Murdaugh, who is still behind bars, was obviously not able to attend court Friday.

The 53-year-old disgraced attorney remains in jail on charges related to the Gloria Satterfield case. Those charges stem from an investigation by South Carolina attorneys Eric Bland and Ronald Richter — who uncovered a shocking paper trail showing how Alex Murdaugh allegedly stole $3.6 million from Satterfield’s grieving family in her death settlement.

One month before he was charged in that case, Alex Murdaugh was arrested for another set of charges stemming from a bizarre suicide-for-hire insurance fraud scheme where he claimed to be shot in the head on Labor Day weekend.

Following that incident, Murdaugh gave control over his assets to his surviving son, Buster Murdaugh.

According to Tinsley’s motion, Buster was immediately granted “broad powers“ to perform all and every act and thing whatsoever”, including “to sell, assign, convey, pledge, mortgage and encumber… and generally manage, any and all property, both real and personal which [Alex Murdaugh] may own or acquire in the future from any source.”

While Tinsley recognized that appointing a receiver is a severe remedy, he argued that the circumstances in this case meet the requirements.

He mentioned other financial moves by the Murdaugh family, including:

During the hearing, only one attorney appeared to be present on behalf of the once powerful Murdaugh family. John Tiller, an attorney who represents the insurance company that has agreed to cover up to $500,000 for Alex and Buster Murdaugh in the Beach case, argued on the Murdaughs’ behalf, claiming that Tinsley hasn’t effectively proven yet that Paul Murdaugh was driving the boat when Beach died.

For a reminder, in February 2019, a highly intoxicated Paul Murdaugh was allegedly driving his father’s boat when Mallory Beach was killed in a horrific crash near Parris Island, South Carolina. At the time of Paul Murdaugh’s death in June 2021, he faced three felony boating under the influence charges in that crash.

“There’s no one to defend Mr. Murdaugh,” Tinsley told the court Friday. “In all due respect, Mr. Tiller is a fine lawyer and I respect him greatly. But he’s been hired by one particular insurance company and I sincerely doubt that they’re going to pay to defend him (Murdaugh) for these unrelated claims the receiver can do.”

Tinsley quoted absent attorney Dick Harpootlian at least a half dozen times in reference to his claims that Alex Murdaugh is destitute.

“He’s living pretty well for somebody who has no assets,” Tinsley said. “He’s got a crisis manager. He’s got a number of lawyers, in addition to Mr. Tiller, that he’s paid for.”

Earlier today, FITSNews founding editor Will Folks pointed out the fact that “Tinsley’s filings have revived the debate over who is paying the bills for Murdaugh attorneys Dick Harpootlian and Jim Griffin – as well as the Columbia, S.C.-based public relations team led by prominent Democratic strategist Amanda Loveday.”

Harpootlian and Griffin — who are currently representing Alex in multiple criminal cases — were hired to defend Paul Murdaugh in the boat crash criminal case in either March or April 2019, which would be soon after he transferred a large amount of the settlement money to his own account, according to prosecutors.

In court, Tinsley said Griffin charged $750 an hour for his attorney fees.

So how is Alex Murdaugh paying that if he’s broke? And where did that money come from?

Bland previously told FITSNews the receivers will be able to find out whether or not Griffin and Harpootlian were paid any fees from funds allegedly stolen from the Satterfield settlement.

“The receiver will unwind every single transaction that Alex has done since 2015 when he opened the account and he will go to the people who have money (from the settlement) and they will have to disgorge that money,” Bland previously told FITSNews. “Dick Harpootlian and Jim Griffin should look long and hard on whether they want to start spending the attorney fees they are getting (from the Murdaughs).”

During the hearing, Tinsley asked the court to appoint two outside parties — attorney John T. Lay Jr. and former U.S. attorney Peter M. McCoy Jr. — to have control over Alex and Buster Murdaugh’s assets, which is known as “receivership” in the court. This would give Lay and McCoy broad powers to not only lock up Alex and Buster Murdaugh’s assets, but to sue for the recovery of their assets as well.

McCoy and Lay both attended the hearing. Tinsley said there is a lot of work in receivership that McCoy and Lay are both prepared for. He said they would take a percentage of funds recovered for plaintiffs in the civil cases.

Tiller argued that if Hall freezes Murdaugh’s assets and appoints receivers in this case, it sets a bad precedent for other civil cases going forward.

Tinsley said that the receivership is necessary for the victims in this case to get justice. Tinsley said that it’s possible that there are more victims — like the Satterfield family — who were duped by Alex Murdaugh and are waiting to sue him.

“This is a process to protect everyone, including the people who may not even know their money is missing yet,” Tinsley said.

At the end of the hearing, Tinsley drove home the point that Alex Murdaugh isn’t a typical criminal and that extraordinary circumstances should apply to his case.

“This was a gentleman who’s a very sophisticated criminal, he stole millions and millions of dollars and manipulated the system,” Tinsley said. “This was not your average criminal.”