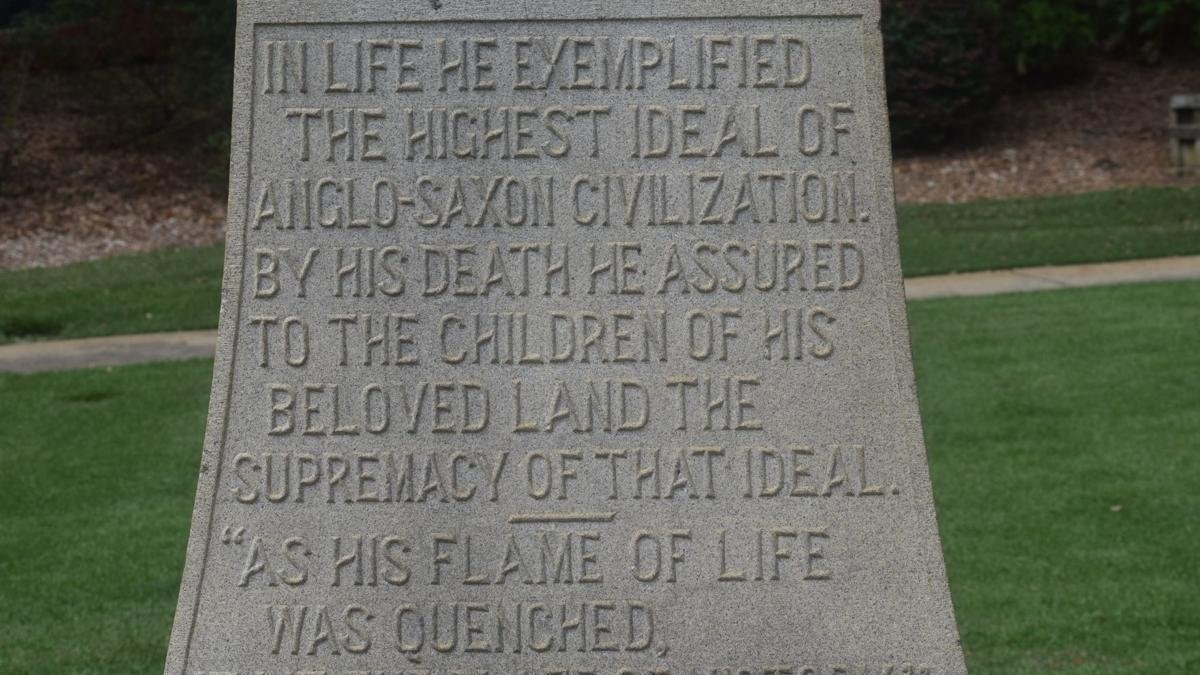 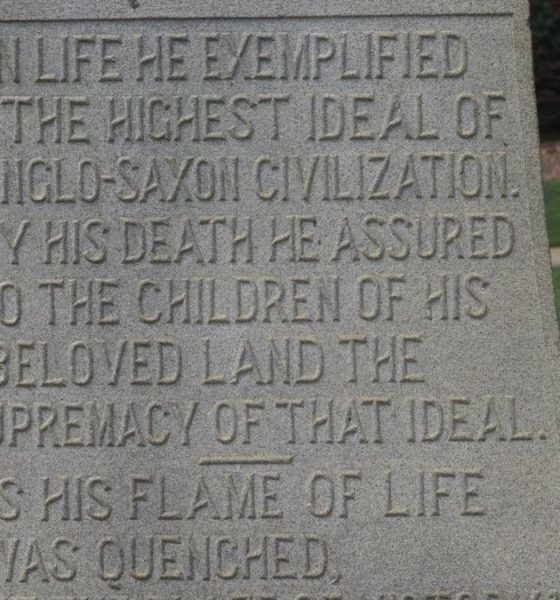 SC Attorney General: ‘Racist Symbol’ Must Be Addressed By Legislature

‘Meriwether Monument’ not subject to Heritage Act … but lawmakers could remove it all the same.

A South Carolina memorial honoring the lone white victim of an infamous nineteenth century attack against a black freedman’s militia is not subject to the Palmetto State’s controversial “Heritage Act.” Still, the Meriwether monument in North Augusta, S.C. cannot be removed except by an act of the S.C. General Assembly, according to an opinion issued this week by attorney general Alan Wilson.

The monument – located in John C. Calhoun park in the heart of the city – was erected in 1916 to honor Thomas McKie Meriwether, a white farmer who was killed during the 1876 Hamburg Massacre.

The monument refers to Meriwether as a “young hero” who “exemplified the highest ideal of Anglo-Saxon civilization.”

“By his death he assured to the children of his beloved land the supremacy of that ideal,” the text of the monument continued.

Aside from the troubling nature of such “supremacy” language, the “heroic” event which led to Meriwether’s death is also in need of addressing.

The Hamburg Massacre took place on July 8, 1876 in Hamburg, S.C., a once-thriving market (but now a ghost town) located on the banks of the Savannah River across from Augusta, Georgia. There, a racist mob led by future governor and U.S. senator Benjamin Tillman laid siege to an armory building occupied by the freedman’s militia. After surrounding the structure and flushing out its occupants, Tillman and his men tortured then murdered at least six free black men (including a sitting state lawmaker).

The outspoken white supremacist and lynch law advocate (above) was among an estimated ninety people who were indicted but never prosecuted for their role in the slaughter – which Tillman later described as one of many “stirring events” that rallied support for his future political campaigns.

According to the attorney general’s opinion – written by solicitor general Bob Cook – the massacre was a “key catalyst and rallying point for a resurgence of white supremacy in South Carolina.”

“The Meriwether monument … is offensive for what it stands for,” Cook wrote, calling it a “racist symbol.”

“If such an abhorrent reverence of Jim Crow is to be removed, it must be done through the proper legal process,” Cook opined.

In other words, no civil disobedience …

Also, the opinion does not weigh in “with finality” as to whether the monument would fall under the Heritage Act.

“We cannot imagine that the General Assembly intended the Heritage Act to protect such an obviously hateful testament to the racial practices of the past as this monument is,” Cook continued. “Nevertheless, this office possesses no authority to determine with finality whether or not the Heritage Act applies to a particular monument or memorial.”

Whether the act applies to the monument or not, though, the process for removing it remains the same – assuming Wilson’s office is correct in its prior opinion about the controversial law.

Passed in 2000 as part of the bipartisan, biracial compromise responsible for moving the Confederate flag off of the dome of the S.C. State House, the Heritage Act holds that “any monument, marker, memorial, school, or street erected or named in honor of the Confederacy or the civil rights movement located on any municipal, county, or state property shall not be removed, changed, or renamed without the enactment of a joint resolution by a two-thirds vote of the membership of each house of the General Assembly.”


This law was successfully amended in 2015 when the Confederate flag was taken off the north lawn of the S.C. State House grounds. The flag’s removal – which this news outlet supported – came in the aftermath of the Holy City Massacre, the racially motivated murder of nine black South Carolinians (including S.C. senator Clementa Pinckney) by avowed white supremacist Dylann Roof.

Pinckney’s widow – Jennifer Pinckney – has since filed a lawsuit challenging the constitutionality of the Heritage Act.

Like Wilson’s office, we believe the law is constitutional. However, we believe its requirement of a two-thirds supermajority for the purpose of making amendments is likely to be found unconstitutional. That means a simple majority of lawmakers in both chambers should soon be able to pass legislation removing monuments and memorials across the state (assuming they are determined to fall under the jurisdiction of the law).

Such a scenario is likely to create a steady stream of political headaches for governor Henry McMaster – who as we noted in a previous post has a decidedly less-than-woke personal history.

As for the Meriwether monument, it certainly appears to fall outside of the jurisdiction of the act … but given that it was erected by the legislature, the process for taking it down would be the same.

Should it come down? This news outlet has warned in no uncertain terms against the slippery slope of revisionist historical sanitization – and as we noted in a recent column, we believe erasing history is a weak alternative to teaching it. Having said that, we would be hard-pressed to think of a more offensive and inaccurate “historical marker” than this one – and cannot envision any scenario in which we would defend it from those looking to take it down.

Upstate Drug Bust: 39 Indicted After 54 Pounds Of Meth And 5 Pounds Of Heroin Seized In SC