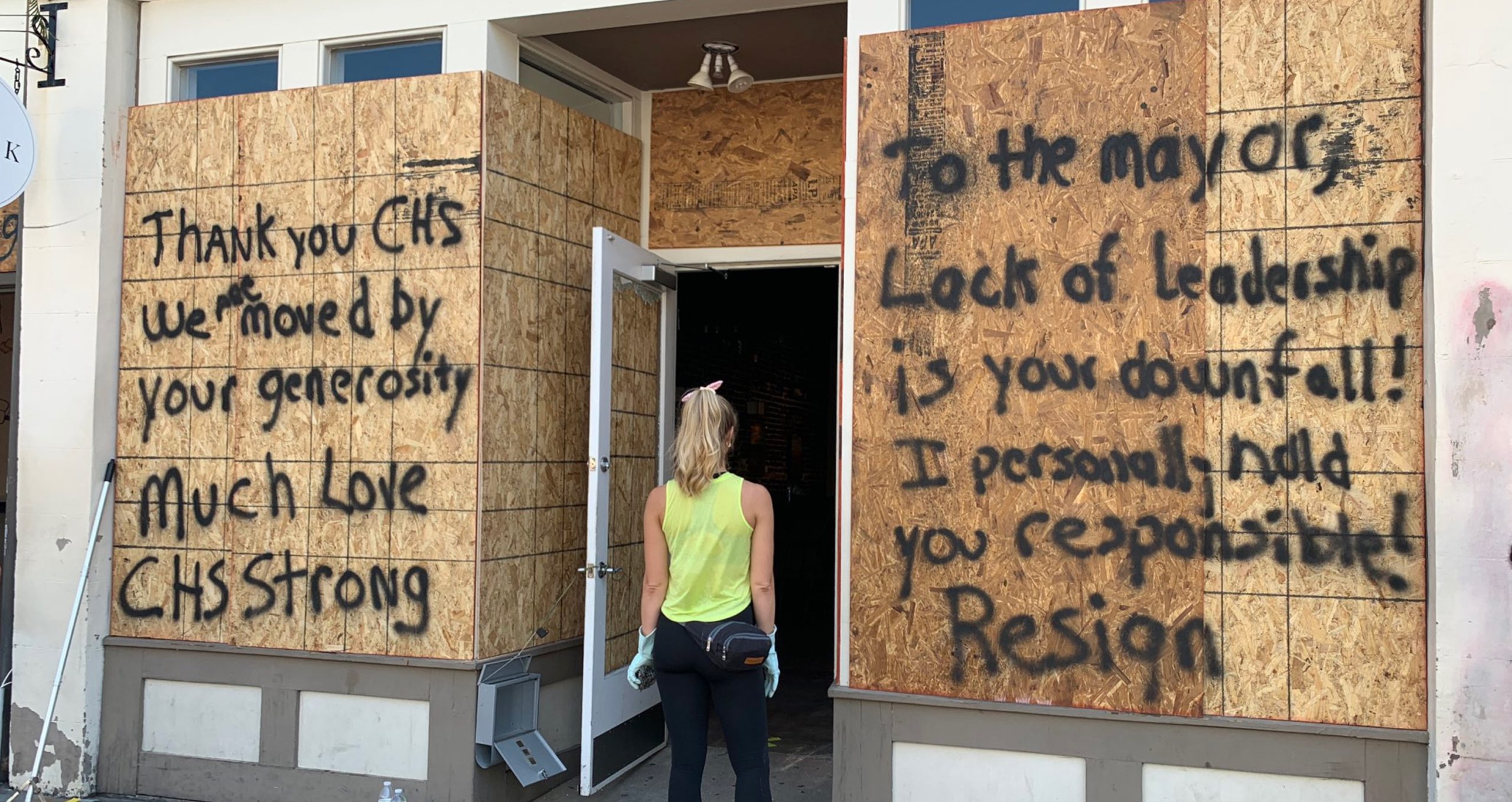 Charleston, South Carolina mayor John Tecklenburg is facing withering criticism from citizens and business owners after he and police chief Luther T. Reynolds were accused of allowing rioters to have their way with the historic city during Saturday night’s violent demonstrations in the historic city.

A violent mob swarmed the heart of the Holy City on Saturday evening – destroying storefronts, looting private property and setting fire to businesses as part of a nationwide spasm of violence in response to the killing of George Floyd in Minneapolis, Minnesota last week.

Where were the police in response to this violence? Good question …

Yesterday afternoon, this news outlet tweeted that “multiple law enforcement sources in Charleston” informed us that Tecklenburg instructed city police to “essentially stand down during the worst of the rioting in the Holy City (on Saturday).”

Shortly thereafter, though, reporters Jenna Schiferl and Fleming Smith of The (Charleston, S.C.) Post and Courier published a story in which county sheriff Al Cannon accused city police of refusing to arrest rioters.

“The city’s position was that they were not going to arrest, and we followed that lead,” Cannon told the paper.

Reynolds disputed that assertion, claiming the city made ten arrests on Saturday evening. He also claimed Cannon was not downtown and could not comment on the situation.

Meanwhile, Tecklenburg was grilled by local restaurant owner Steve Palmer over the failure of police to respond to cries for help from businesses on King Street.

“I have never in my life seen such a complete and utter failure on the part of the city,” Palmer told Tecklenburg in a heated exchange that was captured on camera and posted to Facebook.

Palmer wasn’t alone in his assessment of the situation …

“We sat for three-plus hours with no assistance to protect our businesses,” Jack Handegan III wrote on Facebook. “We watched them slowly and methodically smash and steal every single item out of (our) neighbors place while the police never came. Three-plus hours of chaos.”

“There was no law enforcement on upper King Street,” one property owner in the area told us bluntly. “Whatsoever.”

Asked whether law enforcement “stood down,” the owner told us just as bluntly, “I don’t think they stood up to begin with.”

“Charleston was raped,” another business owner said to us. “And (the police) sat back and watched it happen.”

Things got so bad in Charleston that South Carolina governor Henry McMaster was forced to mobilize the National Guard in response to the situation late Saturday. As of Monday morning, guard units were still in position in downtown Charleston – “on alert,” as McMaster put it in a Sunday afternoon press conference.

This news outlet spoke with numerous law enforcement officers, local leaders and business owners on Sunday – all of whom confirmed city police officers were instructed not to engage rioters on King Street.

Also, we retweeted a revealing exchange captured by Post and Courier reporter Sarah Coello, who was in the middle of the rioting on Saturday night.

“Nobody’s getting arrested tonight,” one officer said to another, per Coello’s tweet. “There’s no accountability.”

Charleston police adopted a far more aggressive response to demonstrators on Sunday, but by then it was too late. The damage was done.

One local elected official slammed Tecklenburg and other city officials for “their leaderless f*ck up.” Another claimed Tecklenburg has repeatedly “played up to the Black Lives Matter crowd” in the past, lecturing other local officials of their need to be more “tolerant” of the movement.

Tecklenburg may have a point about tolerance. That is certainly something this news outlet believes to be a necessary ingredient (among all participants) in an ongoing conversation about race, justice and law enforcement in America. After all, what happened to Floyd in Minneapolis was truly unconscionable – and the rage fueling the protests that have flowed from it is clearly justified.

Having said that, the rash of arson, theft, vandalism and violent physical attacks being perpetrated in the name of “justice” for Floyd is utterly inexcusable.

It cannot be allowed to continue, especially as evidence emerges that peaceful protests intended to promote a constructive dialogue are being hijacked by radical domestic terrorists.

Whatever is at the root of the violence, there is never an excuse for city officials abdicating their obligation to public safety …

Sadly, that appears to be exactly what happened in Charleston, S.C. on Saturday night.