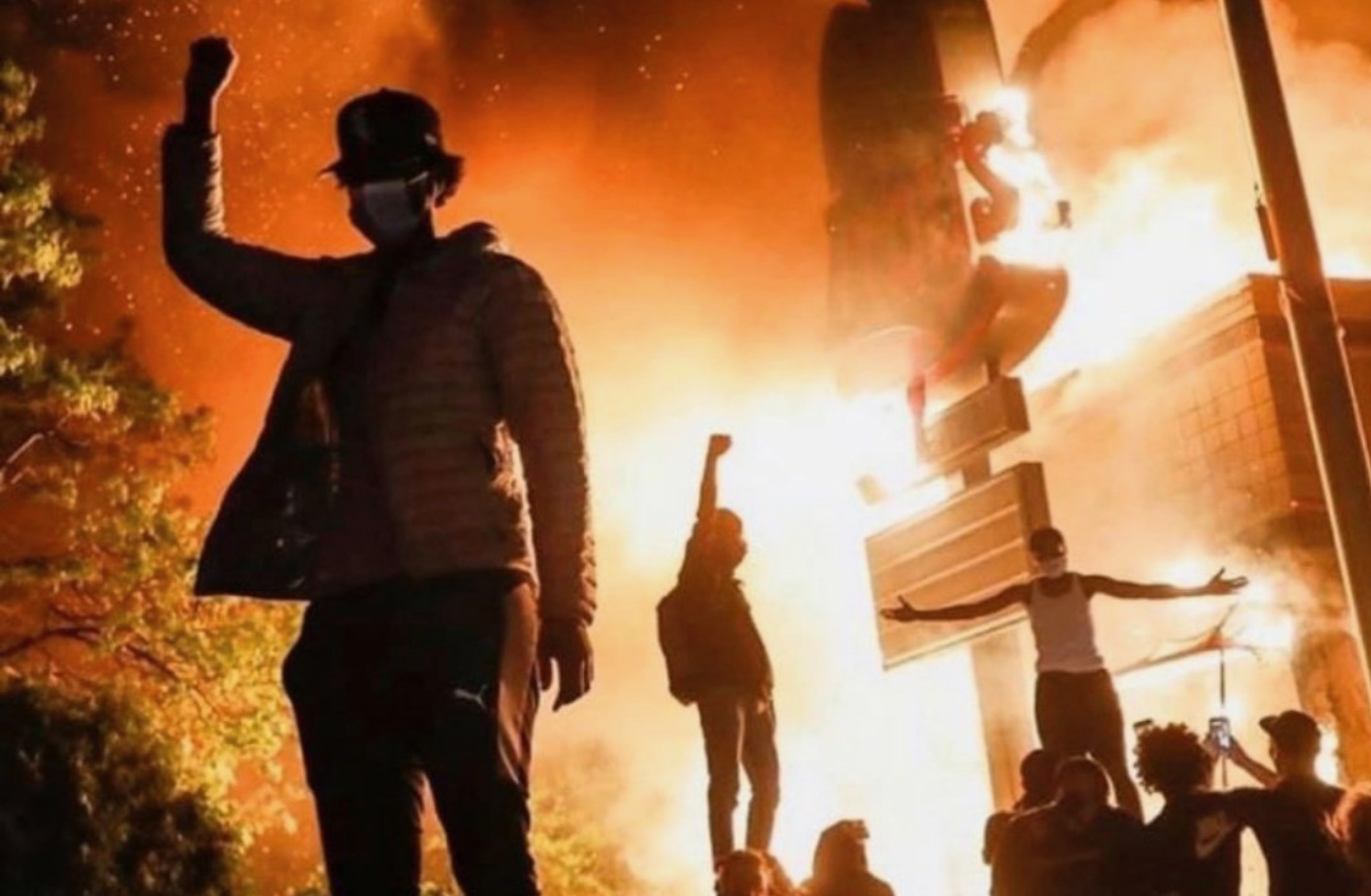 Yesterday, we addressed the killing of George Floyd in Minneapolis, Minnesota – taking note of the “righteous anger” and “authentic, justified rage” this harrowing incident has engendered. Today it falls to us to address the violence, theft and destruction that has emanated (and continues to emanate) from this outpouring of indignation.

Which has result in at least two additional deaths …

Without question the rage of black America in response to what transpired in Minnesota on Memorial Day is entirely appropriate.

Anyone dismissing the appropriateness of such anger is delusional …

“While we condemn the violent lawlessness emanating from this tragedy – the anger fueling it is undeniably justified,” we wrote yesterday.

Obviously there is a key distinction there, which we will return to in a moment …

First, though, since we addressed the situation yesterday there has been an important development in the Floyd case. Derek Chauvin – the 44-year-old Minneapolis police officer who was captured on video suffocating Floyd while the latter was lying face-down, handcuffed on the pavement – has been formally charged with third degree murder and manslaughter and taken into the custody of the Minnesota Bureau of Criminal Apprehension (MBCA).

In addition to these state-level charges, Chauvin is likely to be indicted at the federal level as well … charges which could preempt the Minnesota indictments.

Still, the state wasted no time in initiating action.

“This is by far the fastest that we’ve ever charged a police officer,” Hennepin county attorney Mike Freeman said in announcing the indictments.

The expedited arrest makes sense, too … considering probable cause for Chauvin’s detention on the murder and manslaughter raps has been streaming all over the global internet for several days.

Obviously the filing of these charges does not bring back the life that was taken away – nor does it magically transform every American law enforcement officer into a paragon of colorblind integrity.

George Floyd is still dead. There are still dirty cops. And there is still racism in America.

But the swift filing of these charges is a distinctly positive first step on the road to justice in this case … and those who are justifiably enraged by what happened to Floyd should be encouraged that this step has been taken. Or at the very least they should not ignore it.

Or dismiss it out of hand …

This is what institutional accountability looks like. In fact, this news outlet has argued there should be even more accountability when it comes to those who are convicted of murder (including cops).

But that is another debate for another time …

Now we must address the violence, theft and destruction of personal/ public property that is running rampant across the nation in the aftermath of Floyd’s killing … actions which far too many among us have actively or tacitly condoned/ justified.

To wit: All over social media right now, a memorable quote from Martin Luther King Jr. – “a riot is the language of the unheard” – has been making the rounds. And while it would be nice to argue this quote is wrong, or wrongfully applied or has been taken out of context … none of those things are true.

King wasn’t wrong in describing riots thusly. Nor have his words been wrongfully applied or taken out of context.

“Riots do not develop out of thin air,” King said in a speech at Stanford University in 1967. “Certain conditions continue to exist in our society which must be condemned as vigorously as we condemn riots. But in the final analysis, a riot is the language of the unheard.”

It was a quote King used often, and it was almost always used in reference to underlying injustices targeting black Americans.

Wait, though … wasn’t King supposed to be a proponent of non-violence in response to racial injustice? Yes.

Which is the distinction that matters here …

As for riots in particular, King referred to them as “socially destructive and self-defeating” while reminding those doing the rioting “there is no practical or moral answer in the realm of violence.”

As for violence in general, King called it “a descending spiral ending in destruction for all.”

We concur … on all counts.

So, the representation that King would have condoned what is happening in America right now is utterly absurd – and demonstrably at odds with his teachings.

While a riot is indeed the “language of the unheard,” it is not the language King spoke – nor is it a language he encouraged his followers to speak. Nor is it a language that will lead our nation to anything resembling racial harmony if it is pursued.

Or as progressives are wont to say … let’s not “normalize” reactionary killing, theft, looting, destruction of property, arson, etc. as justified actions under any circumstances, even if the anger underlying those actions is eminently justified.

“This is absolutely no longer about George Floyd or addressing inequities anymore,” Minnesota governor Tim Walz said in response to the violence engulfing his state. “This is an organized attack designed to destabilize civil society.”

We wrote yesterday that failing to call out the definitive wrongness of the killing of George Floyd was “to sin by silence when we should protest.” Which as the poet Ella Wheeler Wilcox noted makes anyone who remains silent “cowards.”

And we should protest, but protesting is not rioting … despite attempts by the nation’s left-leaning mainstream media to conflate the two.

“No one truly concerned with the aspirations – and grievances – of American blacks should confuse riots with protests,” noted Howard Husock for City Journal. “It’s as if we have learned nothing over two generations about what happens when public officials give license to the lawless (and) letting marauders proceed under cover of high-mindedness.”

Husock is absolutely correct. Anyone participating in or glorifying violence (ahem) in the aftermath of Floyd’s killing – or using the tragedy as cover for unrelated immoral acts – is just as cowardly as those refusing to acknowledge the underlying justification for legitimate black anger at what happened.

Guest Column: No Football, No Business For Many College Towns