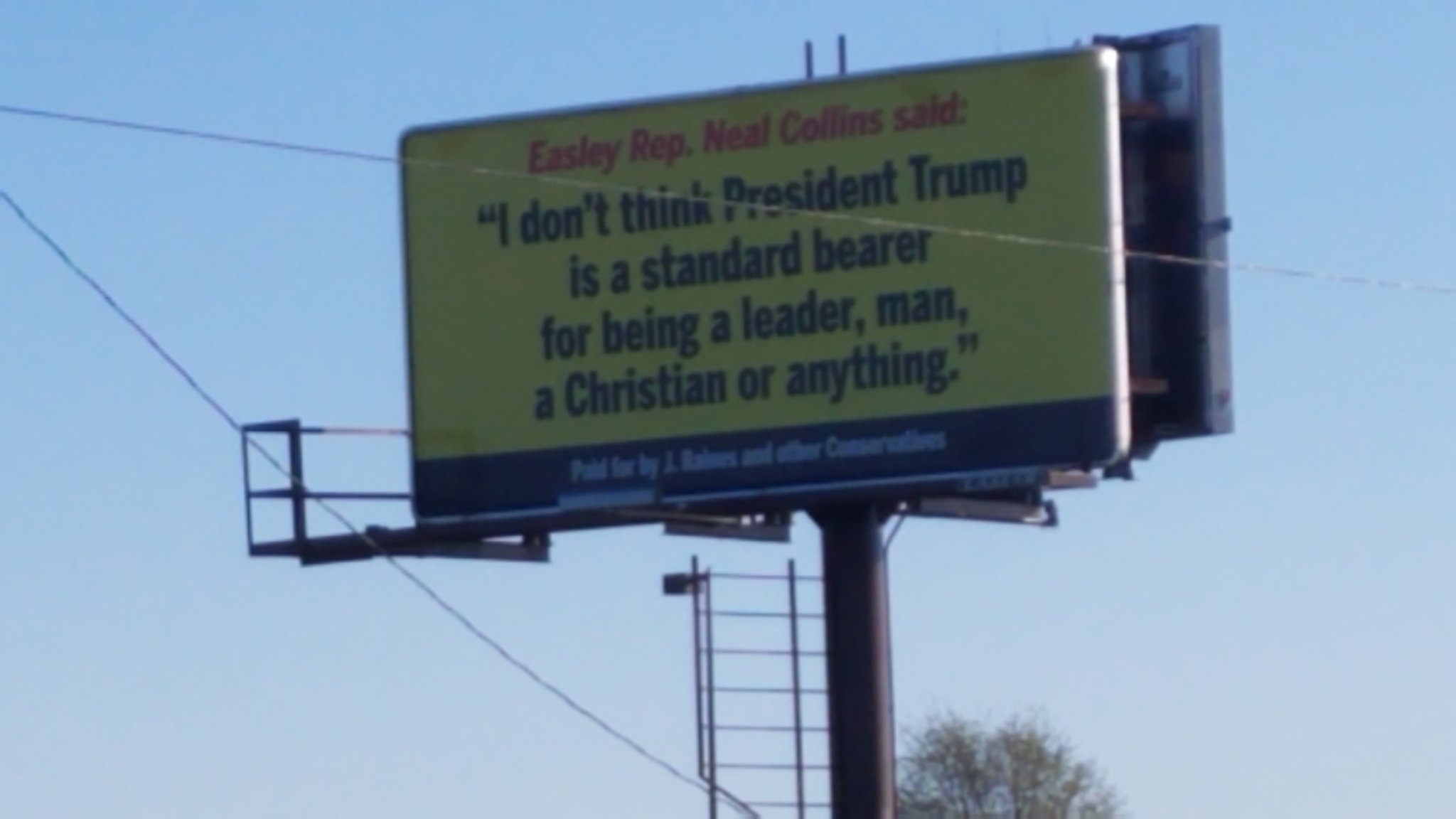 A fiscally and socially liberal lawmaker in the staunchly conservative South Carolina Upstate is the target of a new billboard campaign seeking to discredit him with GOP primary voters. Which lawmaker are we referring to? State representative Neal Collins – who has survived multiple primary challenges in recent years despite his left-leaning ideological orientation.

According to the billboard – which was paid for by activist Johnnelle Raines and “other conservatives” – the third-term lawmaker from Easley, S.C. is insufficiently loyal to U.S. president Donald Trump.

The billboard quotes Collins as saying the following …

I don’t think President Trump is a standard bearer for being a leader, man, a Christian or anything.

According to Raines, Collins offered that assessment of the 45th president during a 2018 debate at Tri-County Technical College in Pendleton, S.C.

We don’t doubt that …

Collins (above) refused to support Trump during the 2016 general election – a race which saw the president receive a whopping 74.7 percent of the vote in his district.

“As a conservative millennial, nothing frustrates me more than a non-conservative baby boomer being my party’s nominee,” he told reporter Amanda Coyne of The Greenville News. “Add on to that his personal attributes and our party is going to suffer for years with women, minorities and youth.”

Despite his staunch #NeverTrumpism, Collins continues to handily win GOP primary races in S.C. House District 5 (.pdf) – a seat he has held since 2015.

In his most recent primary in June 2018, Collins defeated nuclear station employee Allan Quinn in a Republican runoff – earning 57.6 percent of the vote over his more conservative rival.

Collins will face another primary challenge this June (assuming the state doesn’t postpone primary elections). Quinn has filed paperwork with the S.C. State Election Commission (SCVotes.org) to run for this seat again, as has local pastor and small businessman David Cox.

Cox also campaigned against Collins in the 2018 GOP primary election, finishing in third place with 24.2 percent of the vote.

We reached out to Collins to get his thoughts on the billboard. According to the 37-year-old attorney, despite his prior criticism he is rooting for Trump to succeed as his administration battles the 2020 coronavirus pandemic.

“In a time like this, someone outside the district supporting an opponent is spending resources on something so juvenile as a quote from four years ago on a billboard,” he told us. “Given what we know about the virus, no one is a bigger supporter of President Trump to succeed than me. During this time of crisis, I’m focused on supporting our nurses, doctors, first responders, and the citizens of Pickens County. I have no interest in petty politics right now.”

Partisan primary elections are currently scheduled for June 9, 2020 – with runoff elections scheduled for two weeks later, June 23, 2020. In South Carolina partisan primary races featuring three or more candidates, if no one receives a majority of votes (fifty percent plus one vote) a runoff election is held two weeks later between the top two vote-getters.

2,400-lb. Great White Shark Caught Off Hilton Head. The Thrashing Shark Put On ‘Quite A Show’