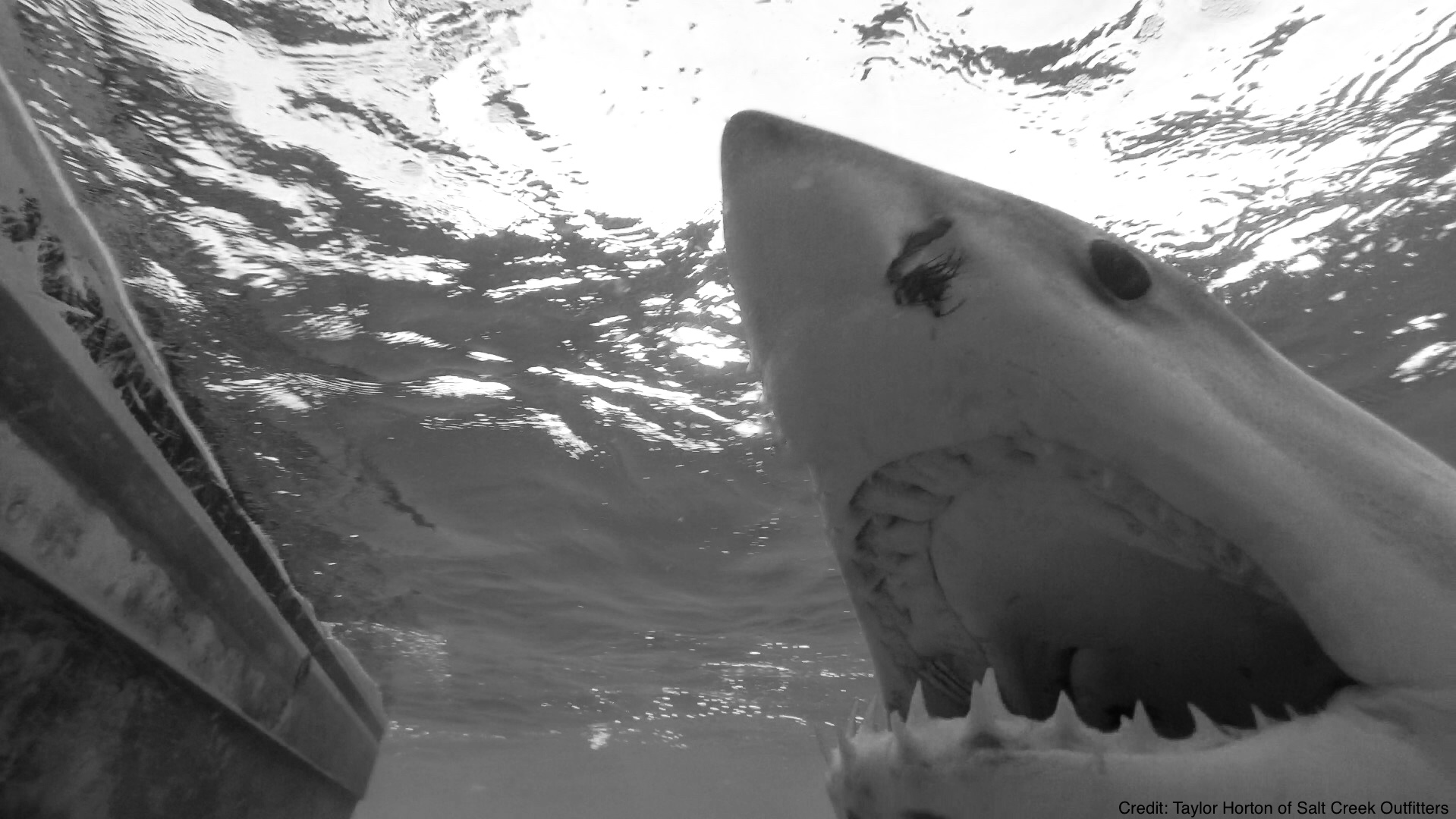 Famous fisherman Chip Michalove was on a mission to catch, tag and release a giant great white shark for scientific study — but given the 70 degree water temperatures off the Hilton Head coast this week, he knew his chances were slim.

Great white sharks typically have vacated South Carolina waters for their annual migration north by this time of the year.

But Michalove and his small crew decided to give it a shot. They anchored up in one of his favorite spots off the coast of Hilton Head Island.

The crew waited for hours without catching anything.

“We were listening to the radio and in between songs, they kept mentioning all the recent record highs, which just solidified that the great white shark season was over and they had moved north,” Michalove said.

And just when they were about to give up for the day, a 14-foot, 2,400-pound great white shark showed up to play.

“One minute everyone’s bored to death talking about Tiger King, the next minute we have the baddest fish in the ocean right under the boat,” Michalove said.

Michalove spotted a mammoth shadow lurking behind the boat and knew it was go-time.

The boat-sized white shark circled around Michalove’s 26-foot catamaran and chomped the bait.

Michalove — who has caught and released 33 great white sharks in his career — wasn’t worried as the monstrous fish jerked and tugged the line. He’s done this dance with the apex predator of the Atlantic many of times.

“We applied pressure when she was about 15 yards away, then locked the drag and set the hook,” Michalove said.

Every great white is different, Michalove said. This one fought the line close to the surface — whipping her hulking tale and spraying water into the ocean air.

“She spun around and started coming at us at about 300 yards away,” Michalove said. “She charged the boat a couple times. That’s when you really need to be careful and keep them away from the boat.”

Putting pressure on the line, Michalove and his small crew tried to reel the big girl in, as she thrashed at the surface.

“Just when we were about to put the tag in her, the hook popped out and she swam away,” Michalove told FITSNews.

Every time Michalove catches a great white — a feat of its own — he does his best to place a tag on the fish so scientists at the Massachusetts Division of Marine Fisheries can track her movements in the Atlantic. Michalove said all of the other sharks he’s tagged have already made their way north this year, which is why he had such low expectations on Monday.

“Just like any type of fishing, as soon as you think you’ve got it figured out, they fool you,” Michalove said. “I probably won’t see another till next winter, and with this one going nuts on the surface the whole fight, it’s a perfect one to end the winter on.”

In January, Michalove named a great white shark after after Grace Sulak, a Bluffton teen who was killed in an unsolved hit-and-run collision on eastbound I-26 in May 2016. As expected, the story about the shark went viral and helped give Sulak’s case the attention it needs.

Michalove is admittedly obsessed and fascinated by the great white shark. Every time he catches one, he learns more about the creature.

“Not only are they massive, but they’re incredibly intelligent,” Michalove said. “This is the smartest fish in the sea we’re talking about. It’s a process trying to figure them out.”

“I’m addicted to it,” Michalove said. “You can’t match the adrenaline rush of being connected to a 2,000 pound fish.”