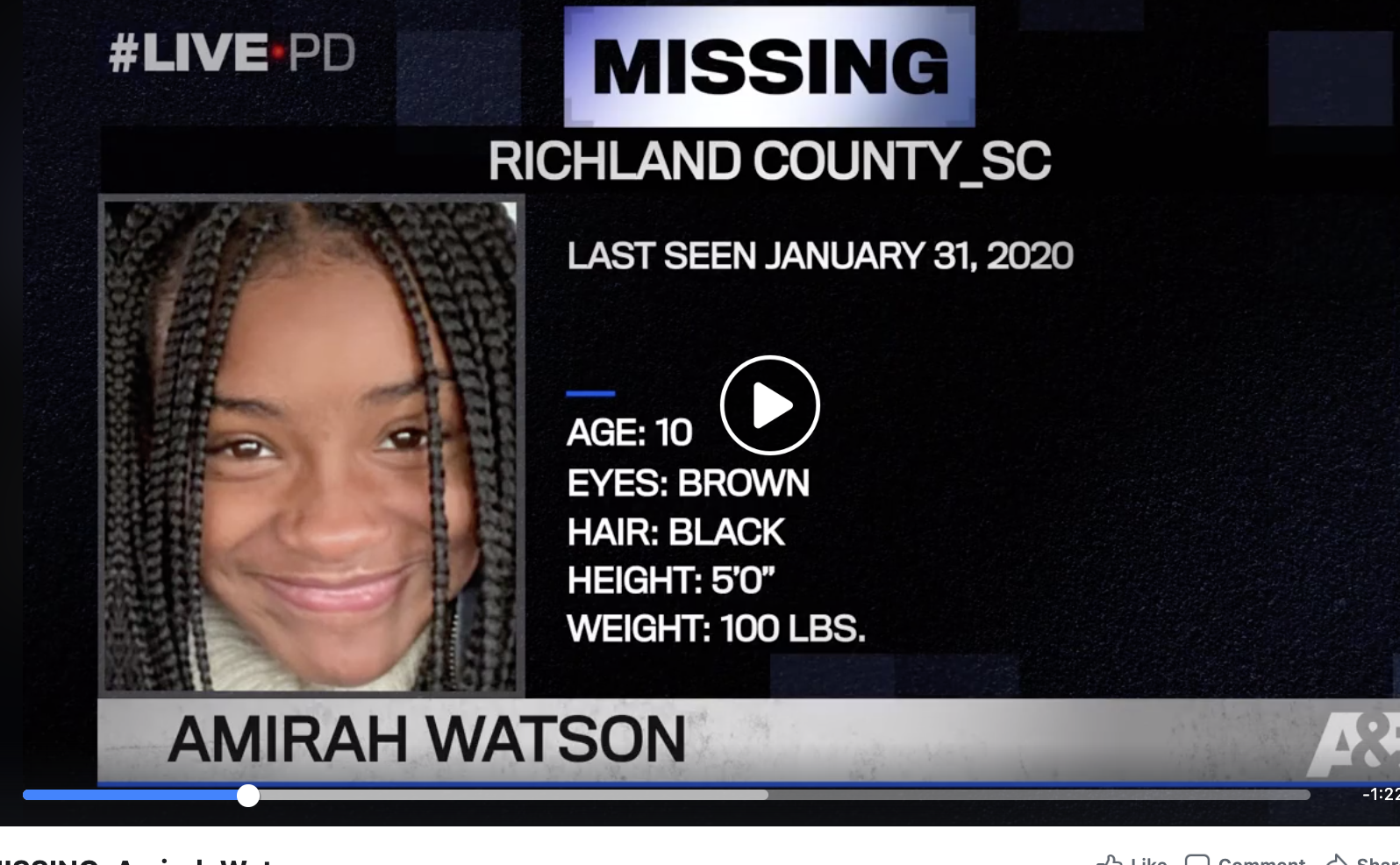 10-year-old Amirah Watson of Richland County, South Carolina has been missing since Jan. 31.

On Saturday, the Richland County Sheriff’s Department used their influence with Live PD to feature Watson’s case in front of a national audience, as first reported by the State newspaper.

Watson disappeared after a weekend visit with her mom Tynesha Brooks, according to the Richland County Sheriff’s Department. A warrant was issued for Brooks arrests for not returning a child 72 hours after visitation after Feb. 2.

Mansoor Watson, Amirah’s father has primary custody. WISTV reports that her father lives in North Carolina and her mother lives in Richland County. The parents were supposed to meet up halfway at South of the Border, the news station reported.

Detective Molly Nations of the Richland County Sheriff’s Department said on the show that law enforcement has not been able to make contact with either Amirah or her mother ever since she went missing.

“At this point… we just aren’t sure (if she’s in danger),” Nations said on Live PD on A&E. “We don’t know where she’s at, where she could be staying, who she’s with. Amirah’s safety is our top concern, as well as the fact she’s been out of school now for five weeks.

Not only was Amirah case broadcasted in front of the Live PD audience on A&E,  but the show also used their social media pages to spread the word. The Facebook post received more than 600 shares.

Amirah’s father wrote on the post, responding to a comment that said children considered to be with their parent shouldn’t be called “missing.”

“Her mother left her 4-bedroom house, 2 cars, fired from her job and I haven’t heard from my daughter since Jan 31st, so yes she is missing,” Mansoor Watson wrote. “Everyone is ignorant to something till it happens to them. I now have sole custody of my child and let me ask you this, do you think my daughter is living a normal life being on the missing person list, with a mother that has a nationwide warrant for her arrest?”

“I’m not going to lie and say my daughter doesn’t love her mother, cause she does, but she loves me also and her home is supposed to be with me,” he wrote.  “People are saying she’s with her mom, she’s fine and she’s not missing, but missing 5 weeks of school isn’t fine. No one but her mother and the family that’s helping them hide knows where she is, so she’s missing.”

Amirah Watson went missing a week before 6-year-old Faye Swetlik was abducted and murdered in nearby Lexington County. Two weeks after she went missing, a man wearing a mask tried to abduct a 14-year-old in Richland County, but was stopped by the girl’s dog.