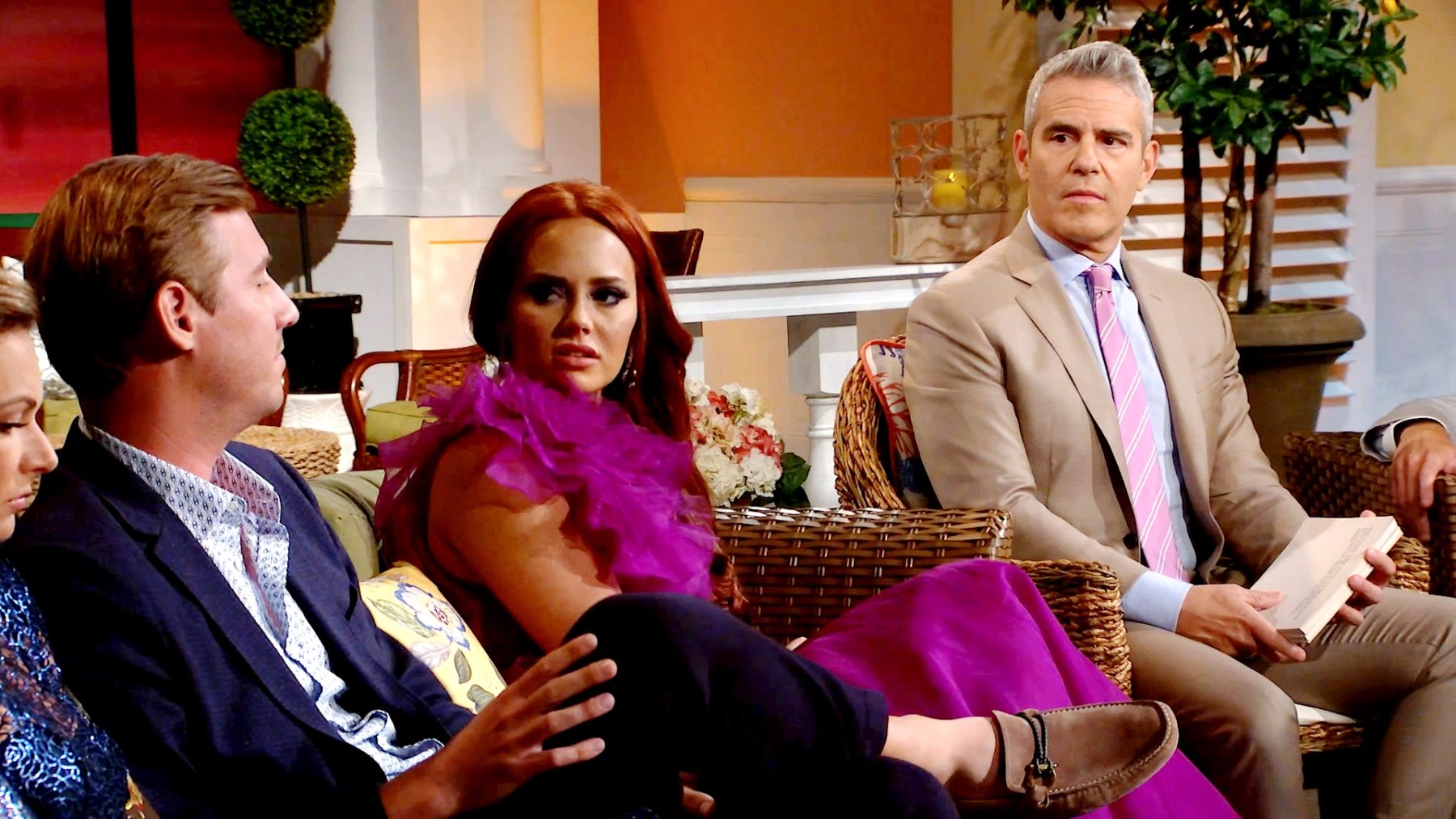 by AMY FEINSTEIN || Well, a whole lot to unpack here. Let’s just call the second installment of Bravo TV’s Southern Charm sixth season reunion the WWE Smackdown between Danni Baird and Madison LeCroy, where you will ask yourself “Do any of these people really like each other?”

And we will finally hear from the newest cast member, Eliza Limehouse, who was recently quoted as saying that perhaps Kathryn Calhoun Dennis is jealous of her. Yeah, I’m not touching that one, but judging by the company she keeps, she seems to be repeating the sins of the father. Search on your app for that Bible verse, (here’s a hint, Old Testament, Deuteronomy 24:16, and yes, I had to look it up).

Just as a head’s up, watch for the women with the arms crossed, particularly in response to the bullshit from the boys. Yes, boys, and I mean that. If they want to act like men, I’ll call them that.

When we last left our Charmers, they were sitting on the couch, being debriefed by Andy Cohen. Danni is seated on the couch, and Austen Kroll looks like he wants to crawl out of his skin. Remember, as of the reunion, Austen still had not said he was sorry to Danni, so as not to seem disloyal and have the gravy, or butt stuff train screech to a halt.

Austen wants to distract and talk about Kathryn’s appearance on WWHL, which she admits was disastrous. Was it her finest hour? No. Kathryn states that it was never about alcohol, but pot, and even the current agreement states that she and former cast member Thomas Ravenel cannot drink when they have custody of the children. Naomie Olindo and Cameran Eubanks both say that someone that they know saw her drinking in New York. Let the people on the couch whose partners or themselves have never gotten a DUI/ been arrested for impaired/ drunk or drugged driving please stand up!

Might want to get that stuff expunged people, because diversion classes means that it’s still on the record. Just sayin’. Austen and Craig Conover, you were disappointed? Hmm.

Let me also say that Danni is the go-to gal for anything, and many people are called ride or die, but she truly is.

Onto Madison supervising the Ravenel children for two weeks while the judge reviewed the CBD situation. Thomas has to approve the people (though not anymore, as the judge ruled his latest allegations had no credence), and it seems he only approves people he wanted to or wants to shtupp, hence, Danni and Madison, because Kathryn’s mother had just entered hospice.

I’m not saying that people don’t have the right to challenge Kathryn about anything that they want to, but Naomie, you lived with a man who you knew was abusing prescription drugs for a year and didn’t say boo, while three cast members mentioned that it was nearly impossible to film with him due to his impairment. Shep Rose has also been arrested for drugs, so let’s not all act like the moral majority. I will gladly confess my sins here and now if you’d like, but they don’t include an arrest for possession, DUI or passing bad checks. I won’t print the particulars now or ever, but check yourselves.

Btw, Austen, Thomas is still creeping up on your friend with benefits under the guise of cutting Saint’s hair, so I’d keep an eye on that if I were you (not that I’m sure the bombshell Madison doesn’t have better offers from younger, better looking men who aren’t felons under indictment, but I digress).

Shep’s lecture about friendship. I can’t. The only friend Shep is concerned about winks back at him in the mirror. And maybe his mama with the homemade meatloaf (and a packet of Knorr’s Onion Soup mixed with ground beef and ketchup isn’t actually a recipe).

Next, here’s Eliza, “fresh off a family scandal!” For real? Shep says that Eliza’s social awareness can be lacking, white trash, party of one? Pot meet kettle?

And Eliza, people don’t dislike your family for having money, but when a sanctimonious family values blowhard gets caught with his face in the honey jar, people have their schadenfreude moment universally. Like Jim Bakker with the hookers. Low hanging fruit.

And by the way, you knew that Plan B, or she who will not be named by me because she craves her name in a Google alert, had offended more than Kathryn, and you just did what you were told. But stick to that story, it’s cute. Cue Kathryn’s stank face. Sorry Eliza, you’re either a moron or crazy like a fox. You pick.

Onto Chelsea Meissner. Austen, a house cat means you are a mooch. Once you feed a cat, they will keep coming back for more, contributing nothing (btw, I love cats, and want to come back as one of mine in my next life). Anyone else notice how Austen is attached to all of the drama this season (ho hum that it was)? He spoke out of turn about Danni, Chelsea, Shep, and yet he’s the one who started this season on tape in his underpants.

Eliza, thanks for playing, now, buh bye. If you don’t need the money, why are you doing this? Wise up and run!

And welcome, Madison! Oy vey. Andy asks Austen about the status of their relationship, and he says they are not together, unless you count at night after the bars close.

If anyone thinks that Austen and Madison is love or meant to be, raise your hand. They are terrible for each other, and are obviously the last people on earth to figure this out. I’d like someone to ask Austen if he hasn’t slept with both of those women, ever.

Next, we delve into the definition of “white trash.” If Shep were any sort of grown up, he would say he was venting and regretted using that term. But no.

Especially after insulting a homeless woman in New York, you just look like a spoiled brat. “You should see my friends in Palm Beach” is the wrong answer.

People who were not raised properly? You mean by other trust-funders with mailbox money who have had every advantage yet are still fighting invisible demons of their own making? Those people? And those women you brought to Patricia Altschul’s party, they are just “country?” You are so full of shit it’s making your hair brown.

Also, Shep, the quote you attributed to Eleanor Roosevelt was not said by the former first lady, but by Dolly Parton’s character in Steel Magnolia’s who reworded a quote by Alice Roosevelt, Teddy’s daughter. Did you really think that sounded like the same woman who spoke of women being like tea, because you never know how truly strong they are until they are in hot water? Some feminist you are. Oh, wait…

Mr. Rose uses his education and “good breeding” as a hammer to beat others with. That one is mine. You can quote me.

Shep doesn’t love Madison, he wants to conquer her.

Now onto that trip to Colorado. Does anyone really believe that Austen thought up the pot dinner all by himself? Production scheduled it to be provocative.

Back to chlamydia, and Austen tells the truth on his makeup bus, and buckles under when swami Shep denies saying it. From what I’ve been told, Shep did tell this tale to Austen, who is now being asked to say by the source that he misheard it under the influence of alcohol. As some obnoxious housewife once said “just own it!” If you can be so disrespectful to share smack talk like this when you are forty and over served, don’t put that on others.

Austen calls Shep a “40 year old dick head,” and Shep argues 39! Does anyone else think he will likely be “39” for three or four years? I didn’t think it was funny, I thought it was crass, and disrespectful to the hostess.

The best quote of the evening goes to Patricia Altschul, courtesy of Ms. Dorothy Parker and the Algonquin Roundtable, so cheers y’all! See you back here for the Ravenel trial or next season, whichever comes first!

What Went Down At The Sleep Inn In Spartanburg South Carolina?