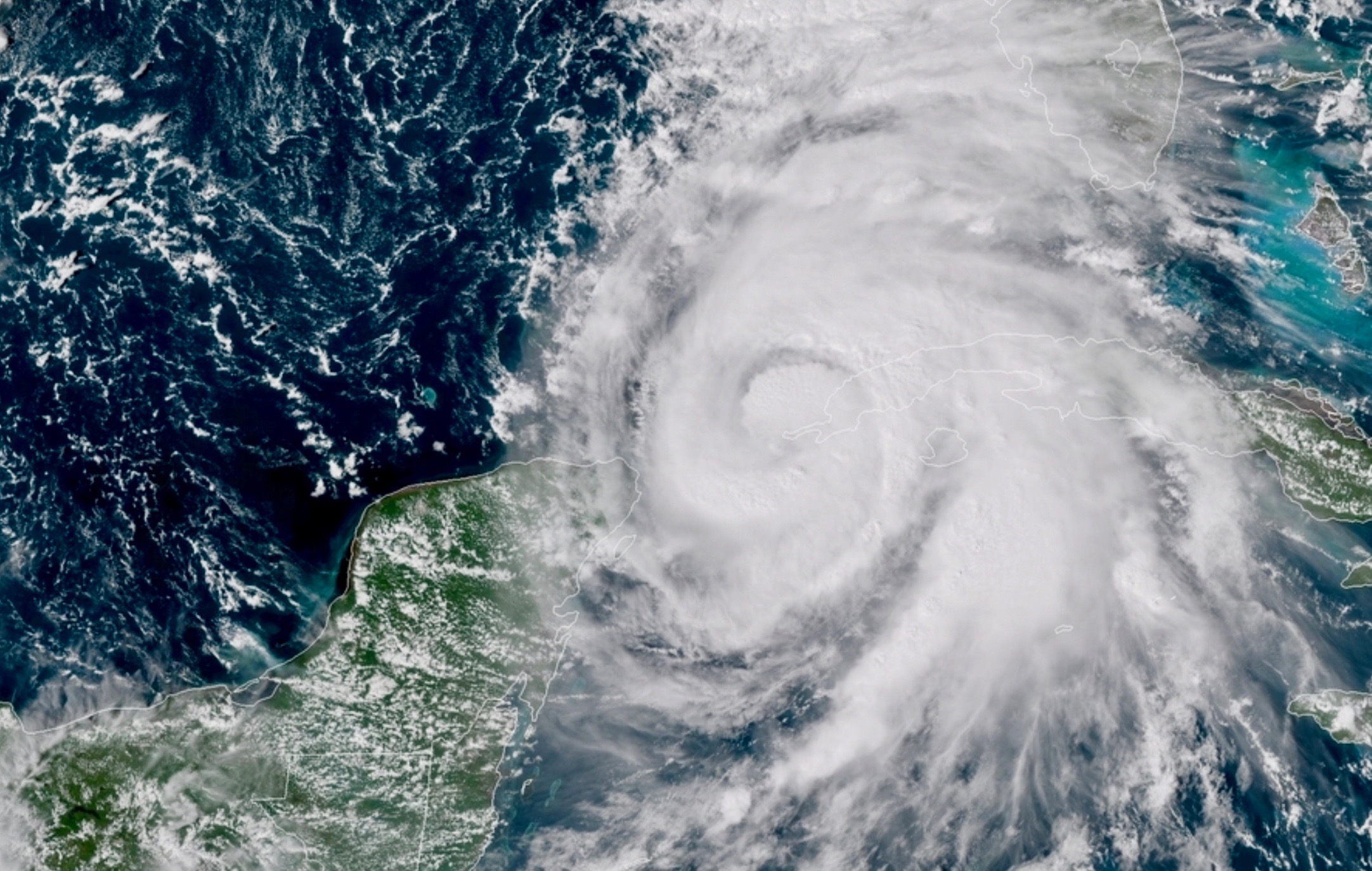 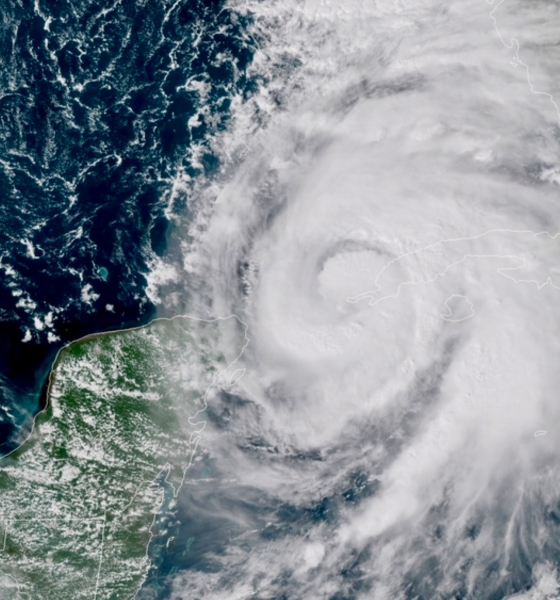 Two days ago, Hurricane Michael didn’t exist.  Two days from now, forecasts project it will be a major hurricane (category three or stronger) bearing down on the gulf coast of Florida.

Michael has left emergency responders in the Sunshine State scrambling to respond.  Its unexpected formation and rapid intensification have created a laundry list of problems (and a short window in which to address them).

Between 11:00 a.m. EDT on Sunday and 11:00 a.m. EDT today, the storm’s maximum sustained winds more than doubled in speed.  And within the next 24 hours, they are likely to do so once again.

“A northward to north-northwestward motion at a slightly faster forward speed is expected through Tuesday night, followed by a northeastward motion on Wednesday and Thursday,” noted the 4:00 p.m. EDT advisory from the National Hurricane Center (NHC) in Miami.  “On the forecast track, the center of Michael will pass near the western tip of Cuba within the next couple of hours and move into the southeastern Gulf of Mexico by tonight. Michael will move across the eastern Gulf of Mexico Tuesday and Tuesday night, is expected to move inland over the Florida Panhandle or Florida Big Bend area on Wednesday, and then move northeastward across the southeastern United States Wednesday night and Thursday.”

“Steady to rapid strengthening is forecast during the next day or so, and Michael is forecast to become a major hurricane by Tuesday or Tuesday night,” the NHC advisory added.

Here is the storm’s latest forecast bubble from the NHC … 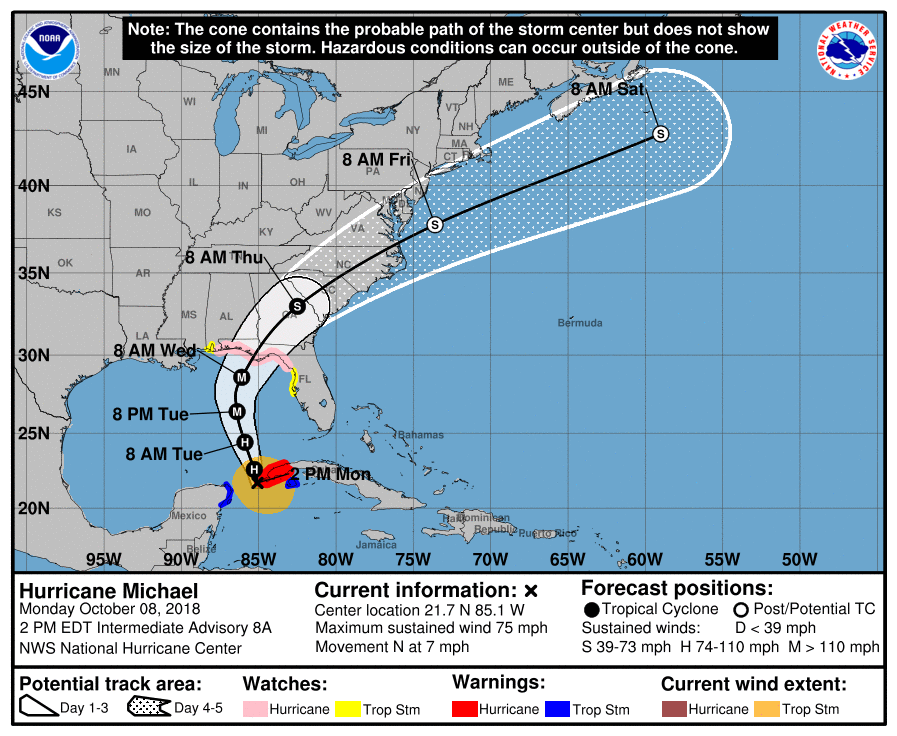 Florida governor Rick Scott said residents of the state’s Panhandle “need to be prepared for a direct hit with sustained hurricane force winds.”

“Hurricane Michael is forecast to be a category three storm when it makes landfall and the impact could be devastating,” Scott tweeted.  “Get prepared NOW.”

Scott has deployed 1,250 Florida National Guard troops with another 4,000 on standby waiting to be called up.  Meanwhile at least three Florida counties – Bay, Gulf and Wakulla – have ordered mandatory evacuations in anticipation of the storm’s impending arrival.

More evacuations are likely, although the storm’s rapid formation, intensification and quicktime march to the north have limited officials’ response time.

Storm surge watches stretch all the way from Pensacola to Tampa, Florida, with maximum storm surge projections now exceeding twelve feet in some locations.  A broad swath of Florida’s Big Bend is now projected to see a storm surge of anywhere from eight to twelve feet.

Beyond Florida, other southern states are bracing for severe weather associated with the system.

“Impacts to Georgia, including damaging winds, heavy rain, and brief, isolated tornadoes, are increasingly likely on Wednesday and Thursday,” a tweet from the National Weather Service (NWS) in Atlanta warned.

“South Carolina could experience periods of heavy rain, gusty winds, tornadoes and storm surge due to Hurricane Michael, with the greatest impacts beginning this Wednesday,” the S.C. Emergency Management Division (SCEMD) advised in a tweet.

South Carolina emergency responders are particularly concerned about another wave of tropical rainfall so soon after Hurricane Florence, which dumped trillions of gallons of water on North and South Carolina.  The vast majority of that wetness fell in the Yadkin-Pee Dee river basin, which prompted historic flooding of several rivers in the Pee Dee and Grand Strand regions of the Palmetto State.