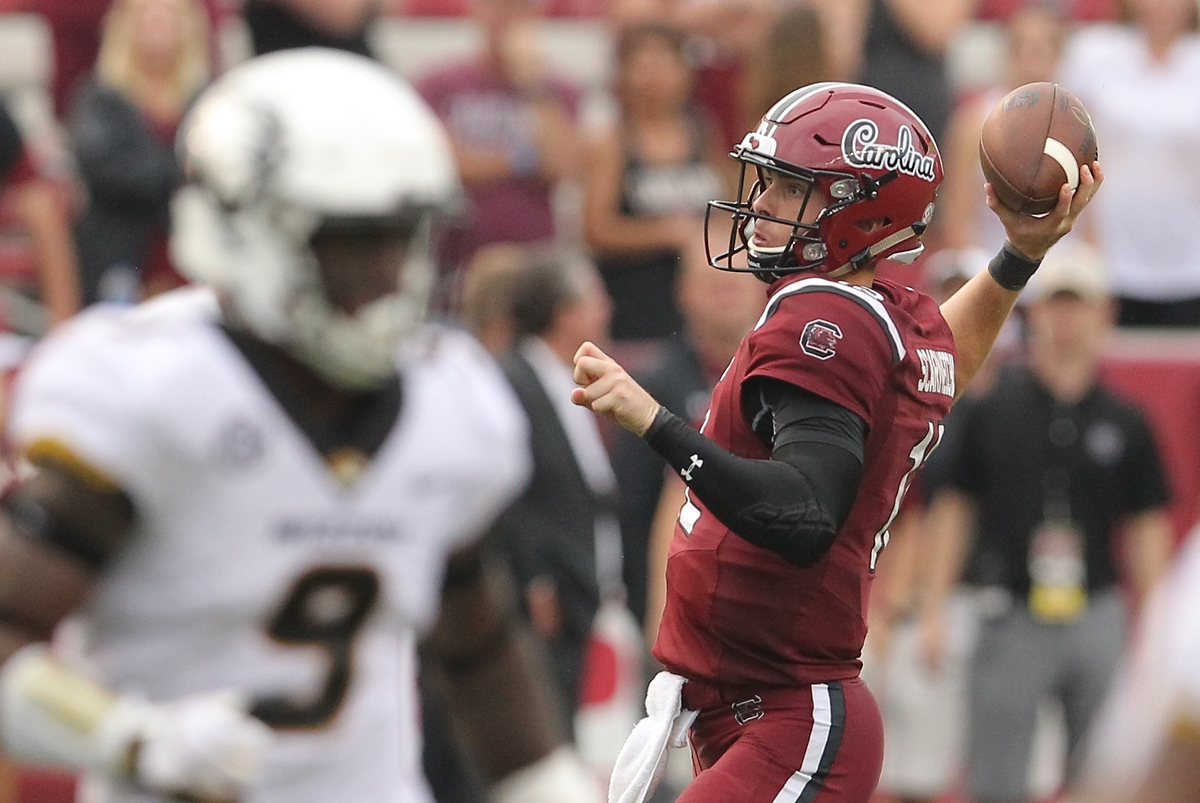 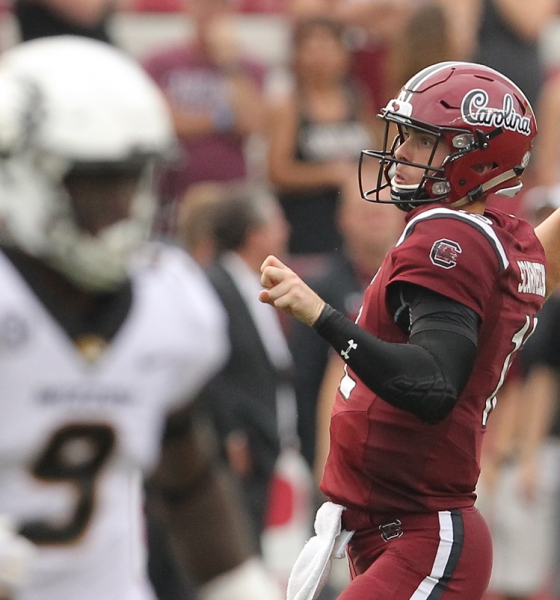 The University of South Carolina football team captured the first of three “must-win” games in its pivotal October home stand on a scorching – then soggy – Saturday afternoon at Williams-Brice stadium.

With lightning flashing, rainfall pelting and momentum constantly shifting, the Gamecocks (3-2, 2-2 SEC) came back twice to claim a victory they absolutely had to have if they intend to go bowling this postseason.

White’s kick was drilled through the uprights with just two ticks left to go on the game clock.  After connecting on all three of his attempts against the Tigers, the 6-foot-5, 200-pound Mount Pleasant, S.C. native is now seven for eight on field goals this season.

The game snapped a streak of 24 consecutive starts for Bentley, who has posted a 15-9 record (including an 8-6 record in conference play and a 1-5 mark against ranked opponents) over that stretch.

Bentley dressed for the game and was cleared to play, but according to his coach he would have been “limited” in what he could do.

“My biggest concern in any situation with a student-athlete is can they protect themselves on game day,” Muschamp said after the game.  “I had a huge concern for that personally. He probably could have gone out there and done some things, but he would have been limited.” 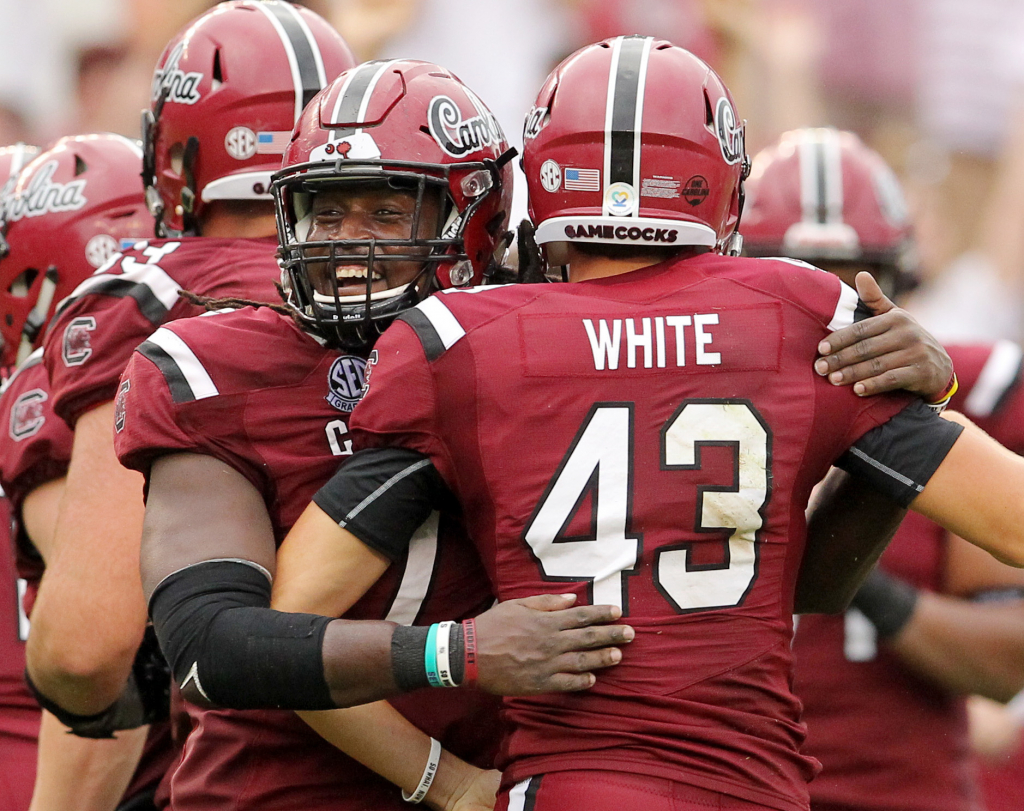 Moments before the game-winning kick from White (above), it seemed as though South Carolina was destined to drop its second consecutive conference tilt when Missouri kicker Tucker McCann nailed a career-long 57-yard field goal with 1:18 left to play to give the Tigers (3-2, 0-2 SEC) a 35-34 edge.

But redshirt senior quarterback Michael Scarnecchia – making his first career start – led the Gamecocks on an eight-play, 53-yard drive to set up White for his second career game-winning kick.  Prior to Saturday’s start, Scarnecchia had completed just eight of thirteen passes for 98 yards in three relief appearances for the Gamecocks.

But with South Carolina’s Bentley nursing an injured knee, this “Kia” economy sedan drove the offense just fine.  Scarnecchia made several critical completions on the game-winning drive, including a 27-yard toss to junior tight end Kyle Markaway that put the Gamecocks within field goal range.

The catch was only Markaway’s second of the season. 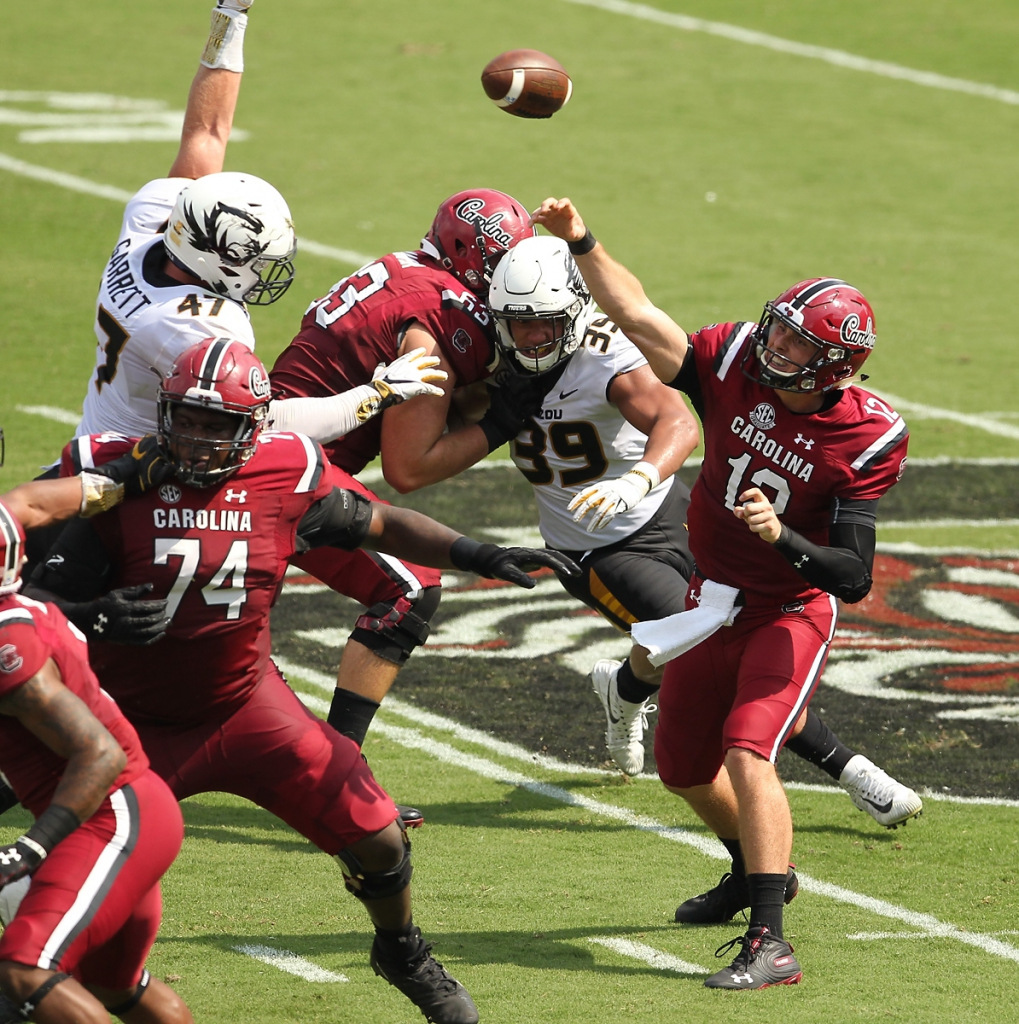 All told, Scarnecchia (above) completed 20 of 35 passes for 249 yards with three touchdowns and no interceptions.  He also protected the football by not fumbling.

“He handled the moment extremely well,” Muschamp said of the first-time starter.

Yet while Scarnecchia was more than serviceable filling in for the injured Bentley – who some felt should have been benched following his disastrous performance last week against Kentucky – this victory was by no means a triumph.  South Carolina’s defense gave up a season-high 490 yards (including 286 yards on the ground), and was lucky to see three Missouri touchdowns get overturned by instant replay.  The defense also committed numerous pass interference and unsportsmanlike conduct penalties – helping sustain drives for senior quarterback Drew Lock.

Lock wasn’t able to finish those drives, though.  Missouri stalled on multiple possessions in the red zone, repeatedly having to settle for field goals instead of touchdowns.

“We’re gonna watch this game and it’s just gonna be a gut-wrencher watching it,” Lock said after the game. “I have probably four or five, six, seven plays in my head right now that you want back, but that’s football.”

The 6-foot-4, 224-pound signal caller from Lee’s Summit, Missouri did join an elite fraternity on Saturday, though.  With his 44-yard strike to wide receiver Jalen Knox in the first quarter, Lock became only the ninth quarterback in SEC history to eclipse 10,000 career passing yards.

South Carolina trailed 23-14 at halftime and the home crowd – such as it was – seemed resigned to another disheartening defeat in what was supposed to be Muschamp’s breakout season.  But the Gamecocks reeled off seventeen unanswered points coming out of the locker room – punctuated by a pick six from sophomore linebacker Sherrod Greene – to take a 31-23 lead into the fourth quarter.

And nor would the anemic crowd …

After torrential rainfall began falling in the second half, lightning strikes in the area delayed the game for over an hour midway through the fourth quarter.  Missouri’s coaches also had trouble with their headsets on more than one occasion, which (by rule) meant South Carolina’s coaches had to give up using theirs – forcing offensive coordinator Bryan McClendon to leave the press box for the sidelines.  Both the stadium play clock and game clock also repeatedly malfunctioned, forcing the SEC officiating crew to announce the game time after every play.

It was a soggy, sloppy game … and it was poorly attended even before the heavens opened over Columbia, S.C.

South Carolina’s athletics department announced a crowd of 73,393, but that number was clearly wishful thinking. 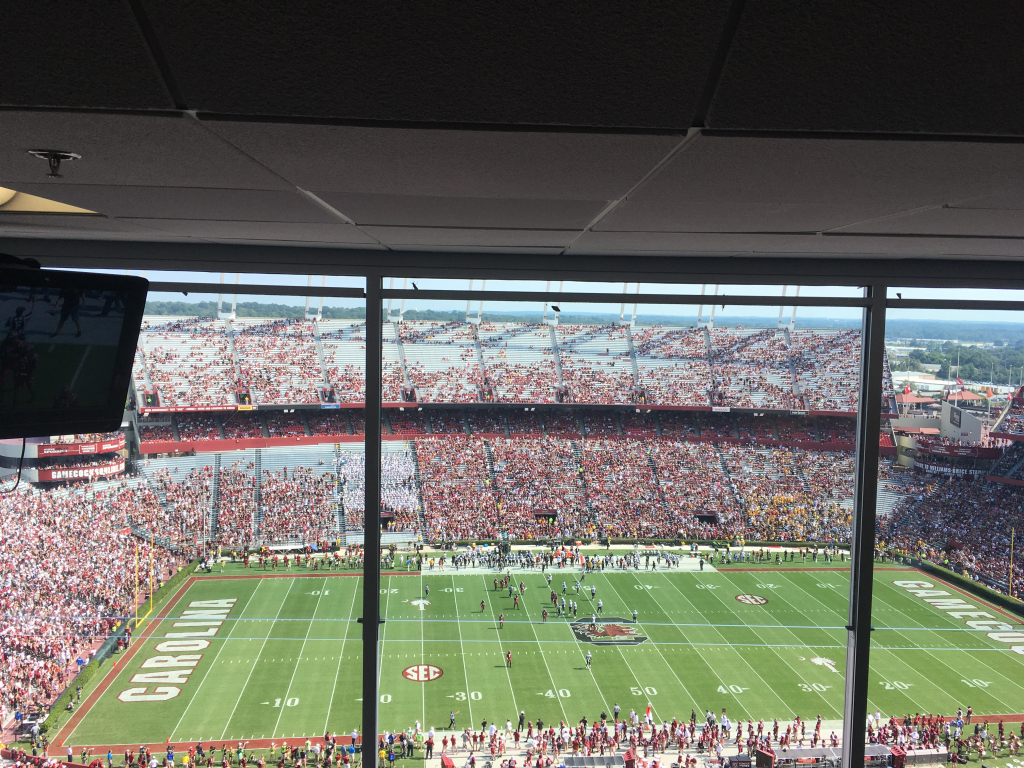 Amazingly, Muschamp had kind words for the Gamecock faithful …

“Appreciate the fans who stayed throughout,” he said.  “It was certainly as loud as it could be there in the fourth quarter and we appreciate them sticking through a couple of rain delays.  Helluva day to be a Gamecock.”

Hopefully the crowd will be better next Saturday (October 13) when South Carolina welcomes its permanent SEC West rival Texas A&M to Columbia, S.C.  The Gamecocks are looking for their first-ever victory over the Aggies, who have won four straight since this series began in 2014.

Kickoff next weekend is at 3:30 p.m. EDT, with the SEC Network providing coverage.