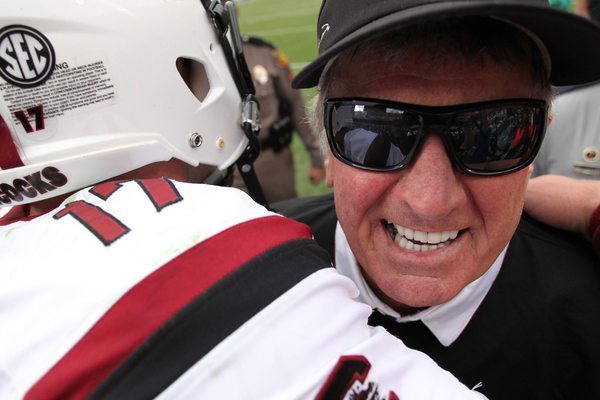 SOUTH CAROLINA STEALS A WIN IN “THE SWAMP”

By FITSNEWS  ||  After blowing two-touchdown leads late in the fourth quarter not once, not twice but three times this season … the football finally bounced the University of South Carolina’s way on Saturday.

An option pitch was fumbled by junior tailback Mike Davis with twelve seconds left on the clock … but Davis fell on a lucky bounce in the end zone to give the Gamecocks (5-5, 3-5 SEC) a game-tying score and a shot against the Florida Gators in overtime.

Davis’ touchdown was set up after South Carolina’s much-maligned defense kept the Gators (5-4, 4-4 SEC) from picking up a game-clinching first down with less than a minute left on the clock.  That’s when the Gamecocks special teams – which blocked a field goal earlier in the fourth quarter to keep it a one-possession game – came up huge again with a blocked punt from junior wide receiver Carlton Heard.

In overtime the defense showed up again – holding the Gators to a field goal on their first possession.  That’s when head coach Steve Spurrier‘s offense – which was held to a season-low seventeen points during regulation – started pounding away at the heart of the Gator defense, picking up a pair of bruising first downs to set up a first and goal at the Florida four-yard line. 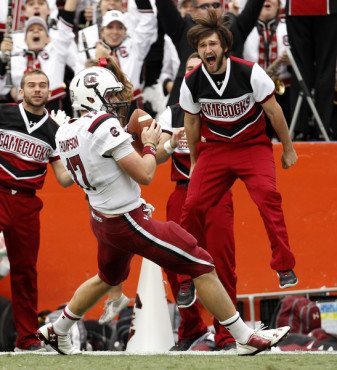 Anticipating another battering ram-style run up the middle, the Gator defense over-pursued on a play fake to Davis – enabling quarterback Dylan Thompson to sprint untouched into the end zone on a four-yard option keeper.

The 23-20 victory broke a four-game losing skid for the Gamecocks – who are now one win away from bowl eligibility.  For Florida, it was the Gators third straight defeat in The Swamp – and possibly the final nail in the coffin of fourth-year head coach Will Muschamp.

“I do feel for coach Muschamp,” Spurrier said after the game.  “He’s a good guy, and it appeared they had that game in pretty good shape, but they didn’t make a first down and we blocked the punt and we win the game somehow.”

Muschamp’s seemingly inevitable ouster at Florida could be South Carolina’s gain, though – assuming Spurrier is true to his word and sticks around for another year as the Gamecocks’ head coach.  The two coaches are extremely close, and it’s unlikely Spurrier will keep defensive coordinator Lorenzo Ward around despite his unit turning in its best effort of the season against the Gators.

Florida’s offense – led by freshman quarterback Treon Harris – amassed only 278 yards against a defense that’s been surrendering 460 yards per game.  They also put just 20 points on the board against a unit that’s been giving up close to thirty-five a game.

With one more victory, South Carolina would become bowl eligible for the eleventh straight season (including all ten years of the Spurrier era). The Gamecocks will look to hit that mark against South Alabama on November 22.

Deshaun Watson Out Again For Clemson