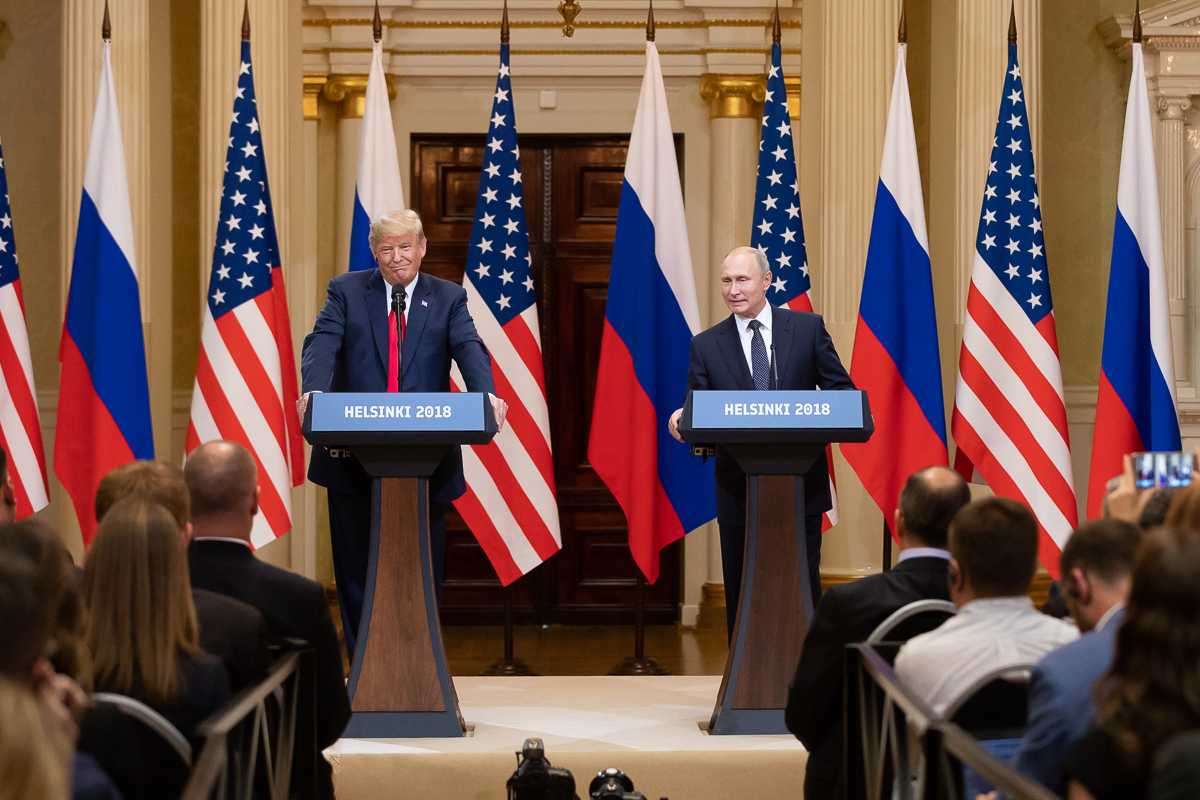 That was President Donald Trump speaking with Russian President Vladimir Putin at the Helsinki, Finland summit on July 16, responding to a question of whether he believed U.S. intelligence agencies, which have stated Russia hacked the Democratic National Committee (DNC) and John Podesta emails in the 2016 election campaign, or Putin, who has denied any role by his government.

Because according to the DNC lawsuit against the Trump campaign, Wikileaks and Russia that was filed in April, the committee may have destroyed all the evidence of the alleged hack by Russia of the DNC emails.

The lawsuit stated, “As a result of the persistence of the Russian state-sponsored infiltration, in order to remove the unauthorized users from its network, the DNC was required to decommission more than 140 servers, remove and reinstall all software, including the operating systems, for more than 180 computers, and rebuild at least 11 servers.”

Moreover, it appears the FBI never took possession of the server, based upon publicly available information. In testimony on Jan. 10, 2017 before the Senate Intelligence Committee, then-FBI Director James Comey stated that “Ultimately what was agreed to is the private company [Crowdstrike] would share with us what they saw… Our forensics folks would always prefer to get access to the original device or server that’s involved, so it’s the best evidence.”

Here, Comey was referring to a private company analysis that was done of the DNC servers by Crowdstrike, which the FBI deferred to for evidence of the hack.

Trump elaborated on the question, saying, “With that being said, all I can do is ask the question. My people came to me, Dan Coats came to me and some others, they said they think it’s Russia. I have President Putin; he just said it’s not Russia. I will say this: I don’t see any reason why it would be. But I really do want to see the server. But I have — I have confidence in both parties. I — I really believe that this will probably go on for a while, but I don’t think it can go on without finding out what happened to the server.”

This is of course not the first time President Trump has questioned the intelligence assessment that Russia hacked the DNC and Podesta emails.  On July 6 of last year he said, “Well, I think it was Russia, and I think it could have been other people and other countries. It could have been a lot of people interfered.”

That’s not much different from what he said in Helsinki. Just days ago on Twitter, on July 14, Trump was asking where the server is.

For his skepticism, the President was excoriated by media outlets and former intelligence officials, including former CIA Director John Brennan, who accused Trump of treason.

Leaving aside the debate over whether a president should take these concerns to a press conference while at the summit overseas, on the substance, Trump is asking a very good question. Perhaps, even, the right question. Which is, what did happen to the DNC servers? How could the federal government conclude that the DNC was hacked by Russia if it did not examine the servers first-hand? Was all the evidence destroyed, per the DNC’s court filing?

You can’t blame the President for being skeptical. One of the first things Trump was briefed on after the election before he was even sworn in as President was the dossier by British spy Christopher Steele paid for by the DNC and the Clinton campaign — which we now know was used to get a FISA warrant to spy on the Trump campaign in 2016 — which alleged, among other things, that not only had Russia hacked the DNC and put the emails on Wikileaks, but that the Trump campaign had helped with “full knowledge” of the hack and publication.

Steele alleged his source had said “there was a well-developed conspiracy of co-operation” between then-candidate Donald Trump and Russia. Steele elaborated, stating in July 2016, “This was managed on the TRUMP side by the Republican candidate’s campaign manager, Paul MANAFORT, who was using foreign policy advisor, Carter PAGE, and others as intermediaries. The two sides had a mutual interest in defeating Democratic presidential candidate Hillary CLINTON, whom President PUTIN apparently both hated and feared… Inter alia, Source E, acknowledged that the Russian regime had been behind the recent leak of embarrassing e-mail messages, emanating from the Democratic National Committee (DNC), to the WikiLeaks platform. The reason for using WikiLeaks was ‘plausible deniability’ and the operation had been conducted with the full knowledge and support of TRUMP and senior members of his campaign team.”

Since that time, former Trump campaign manager Paul Manafort was never indicted for colluding with Russia on the DNC hack. Nor has Carter Page been. In fact, in a July 6 court filing, Special Counsel Mueller stated of the Manafort trial, “The government does not intend to present at trial evidence or argument concerning collusion [by Manafort] with the Russian government…”

So, two years later, no criminal trial against the Trump campaign or campaign officials over the hack is being brought. What else had Steele gotten wrong? Steele also claimed the Russians had incriminating information involving Trump being with prostitutes in a Moscow hotel room in 2013, and the whopper, that he was a Russian agent.

Knowing he was not a Russian agent, how was the President supposed to react? By embracing everything these same spies were telling him about the rest of the investigation? Was he being threatened by Comey, who had delivered the briefing from Steele to Trump?  Was this the sort of evidence the intelligence community used on a routine basis? What if the intelligence agencies had gotten other things wrong, too, on the hack?

Once the Steele dossier became public after Buzzfeed published it on Jan. 11, 2017, just one day after Comey’s testimony, Trump’s skepticism was justified.

Since that time, this whole episode has raised extremely troubling questions about how intelligence agencies themselves meddled in the 2016 elections — through their unprecedented allegations of foreign collusion and utilizing the nation’s foremost spy powers against the opposition party in an election year.

Are the American people or the President just supposed to blindly accept whatever proclamations are issued by the intelligence community that happen to implicate American adversaries and might lead to conflict?

Moreover, are we to believe this is the first time there was a president who was skeptical of an intelligence assessment? 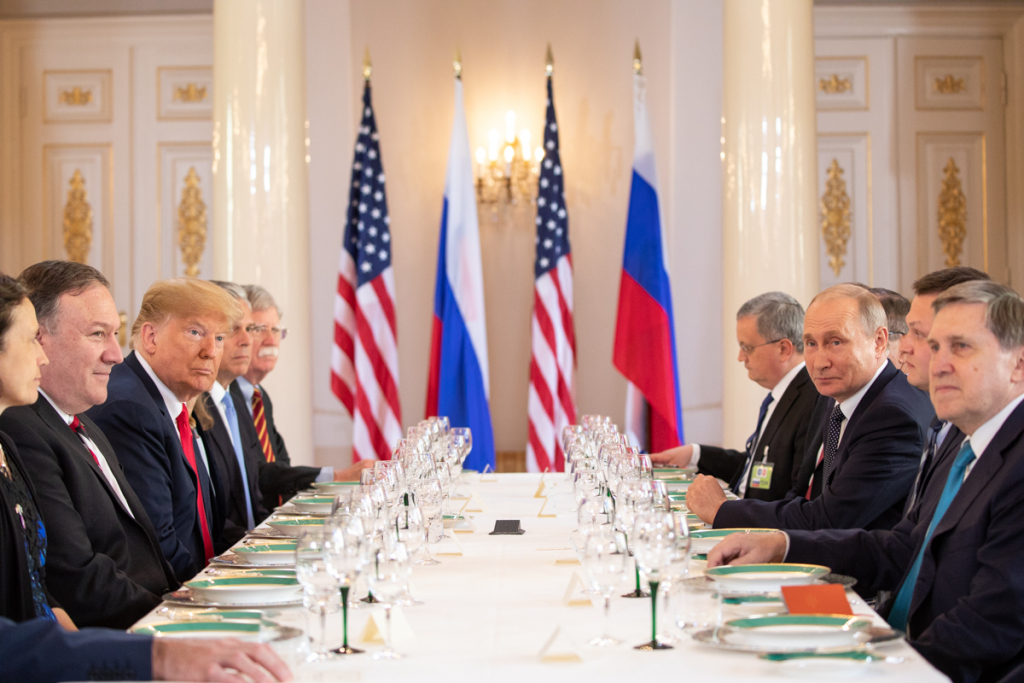 This is the same intelligence community that said there were weapons of mass destruction in Iraq in 2002 and 2003, missed 9/11 and missed the Soviet Union falling. Certainly, those who risk their lives in defense of the U.S. are owed deference, gratitude and respect for their service, but surely, not every assessment issued by intelligence agencies will be acted upon by presidents. Nor should they all be.

Nor will every assessment be made public, as the Jan. 2017 assessment on Russia’s alleged interference in the 2016 elections was, days before Trump was sworn into office. Perhaps it should have been kept classified. By publishing it, the effect was to give the appearance the outgoing administration was attempting to delegitimize the incoming president by saying he owed his victory in part due to the machinations of a foreign power. In this case, Trump had explicitly run on a platform of improving relations with that foreign power, Russia.

It had all the appearance that the outgoing Obama administration wanted to put the new president into a corner and force his hand on U.S.-Russian foreign relations. To undermine his planned policy to achieve a new détente. Moreover, it was to set the stage to keep the counterintelligence investigation going into the Trump presidency. It was immediately followed on by the publication of the Steele dossier, and a series of damaging intelligence leaks, all purporting to prove that Trump campaign had colluded with Russia on the hack.

President Trump and the American people have every right – indeed a responsibility – to question the bases of this investigation.  This was not at all done above board.

In Trump’s case, as the President, he actually has more important issues to deal with. Yes, he has to make a determination about what happened in 2016 in order to be able carry on foreign relations with Russia.

But regardless of what happened, the U.S. has ongoing treaty obligations with Russia, for example on nuclear weapons with the Strategic Arms Reduction Treaty, the Intermediate Nuclear Forces Treaty and so forth.  There is deconfliction to address in Syria so that U.S. and Russian forces do not crash into one another while taking aim at Islamic State. There is more broadly the threat of Islamist terrorism.  There is North Korea and Iran.  There is the civil war in Ukraine that needs to be addressed and whether the U.S. should become a party to the Minsk Accords.

All these allegations have absolutely undermined relations, according to both presidents, and made the world a more dangerous place.

Now, it is entirely possible that as Special Counsel Robert Mueller has alleged on July 13 via his indictment that a dozen Russians said to be GRU intelligence operatives hacked the Democratic National Committee (DNC), the Democratic Congressional Campaign Committee (DCCC) and Clinton campaign chairman John Podesta and gave the emails to Wikileaks to be published.

But it is equally possible that Trump and his campaign had nothing to do with it, even though the Steele dossier said that he did.

Steele was a British intelligence official.  But he is not beyond reproach.  And neither are our spies.  Sometimes people make mistakes.  What would be helpful to settle these questions would be if the DNC presented its servers for forensic investigation.  Or if Wikileaks could provide more information about who their sources really are.  Because the servers were apparently never turned over to investigators, we have a single source, Crowdstrike, saying that Russia hacked the emails.  These issues have not been publicly proven to anyone’s satisfaction.  Without the server, or without Wikileaks, how could they be?

The intelligence agencies and the President’s critics apparently expected the American people to take this all on faith.  Who needed evidence?  Perhaps their assessment would have been more well-received if they had not included the part about the incoming president being a Russian agent.  That was just over the top.

That said, for once, we have a president who will not accept as gospel everything he is told by intelligence officials.  That’s refreshing, not treasonous.  And as we now know from the Steele episode falsely alleging collusion on the hack, that skepticism has been wholly justified.

For his part, Trump is putting American interests first, and the good of the country – and even the world – ahead of what is politically expedient.

“I would rather take a political risk in pursuit of peace than risk peace in pursuit of politics,” Trump said at his press conference. Thank goodness for that. The U.S. and Russia are the world’s foremost nuclear powers and the President is attempting to diffuse what has become a poisoned relationship with Moscow. That’s what presidents are supposed to do. Not take us to the brink.