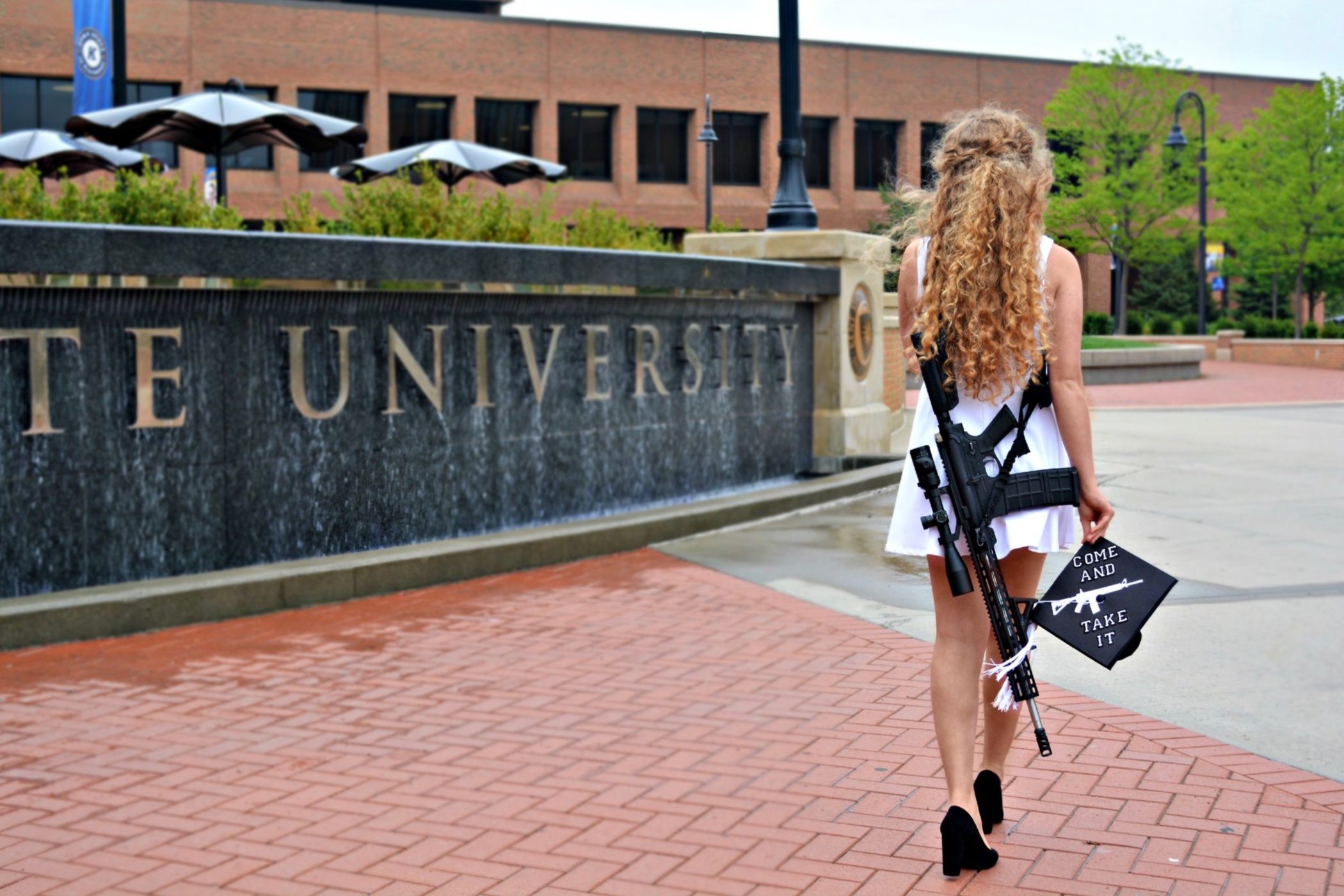 Wisdom is practically nonexistent on college campuses these days.  Nor, in our experience, do deep thoughts typically proceed from mouths of people named “Kaitlin.”

Seriously.  Kaitlins are good for getting directions in shopping malls.  Or posting racy spring break pics on Mexican beaches.  Or filling you in on what Jessica said to Chloe about Joshua at Zach’s party last weekend (spoiler alert: she likes him).

Anyway, imagine our surprise to discover some serious constitutional and historical wisdom emanating from one Kaitlin Bennett – who used the occasion of her graduation from Kent State University this week to promote her Second Amendment rights (and specifically to draw attention to the need for campus carry).

“Now that I graduated from Kent State, I can finally arm myself on campus,” Bennett tweeted, attaching a picture of herself strolling through her former campus with an AR-10 rifle draped over her shoulder.  “I should have been able to do so as a student- especially since four unarmed students were shot and killed by the government on this campus.”

That’s a reference to the infamous May 4, 1970 incident in which four students were killed (and nine others wounded) by members of the Ohio National Guard as they protested U.S. president Richard Nixon’s invasion of Cambodia.

In a follow-up tweet (with another picture), Bennett added that she had “no apologies for my graduation photos.”

“As a woman, I refuse to be a victim and the Second Amendment ensures that I don’t have to be,” she wrote. 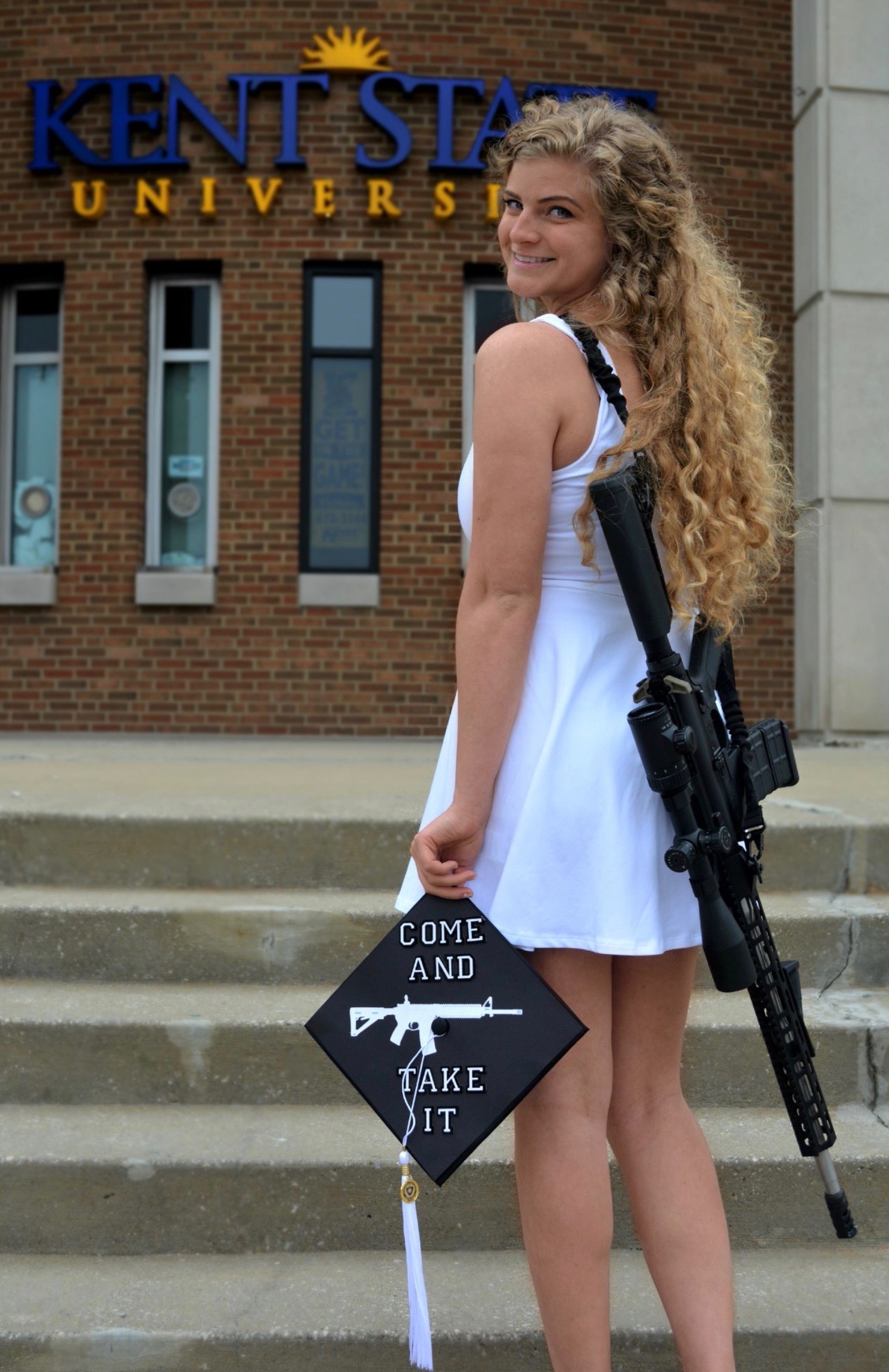 This news site is a longtime, steadfast supporter of the Second Amendment.  In fact we’ve gone so far as to call for the civil disobedience of certain anti-gun laws.  We’ve also been adamant proponents of campus carry.

“Gun-free zones represent an open invitation for evil and/ or unstable people to inflict maximum carnage on unsuspecting citizens – making them the worst response imaginable to school shootings,” we wrote back in October of 2016.  “Seriously, who believes that the best way to respond to a school shooting is by creating more favorable conditions for future violence?  While simultaneously increasing the likelihood that future attacks become more deadly?”

Disarming the law-abiding populace is never the answer to gun violence.  Just look at Chicago.  In fact, federal crime data has consistently shown that elevated gun ownership results in fewer murders, rapes and armed robberies.  But even if it didn’t, grabbing guns would remain unconstitutional.

Anyway, Bennett’s viral post has landed her on the national stage … where she is shining.

In fact, she summed up our views on the sanctity of the Second Amendment perfectly.

“The Second Amendment isn’t about hunting deer,” she tweeted. “It’s about being able to protect yourself from an out of control, tyrannical government.”

“I believe that if the government has it, we should have it. Machine guns – any weaponry,” Bennett elaborated in an interview with The Washington Post.

More elementally, we believe it is vital to remember that the Second Amendment is a codification of natural law (not unlike the First and Fourth Amendments).  In other words it is government acknowledging rights, not granting them.

Because these rights are not up to government to “grant …”

And certainly not up to government to restrict.

Obviously within the vanguard of current (controlled) thought such views are controversial.  Gun grabbers are everywhere … and emboldened by each new shooting that’s invited by their ill-considered ideology.  Such views are especially prevalent among the easily-“triggered” snowflake population.

Not surprisingly Bennett has been mocked for them incessantly on social media.  She’s also received death threats (thus affirming the importance of her right to carry).   But she’s also received a few job offers and marriage proposals … which somewhat restores our faith in humanity.

Whatever you think of her views, though (or ours) … this debate is far simpler than people might imagine.

It’s this: To repeal or not to repeal.