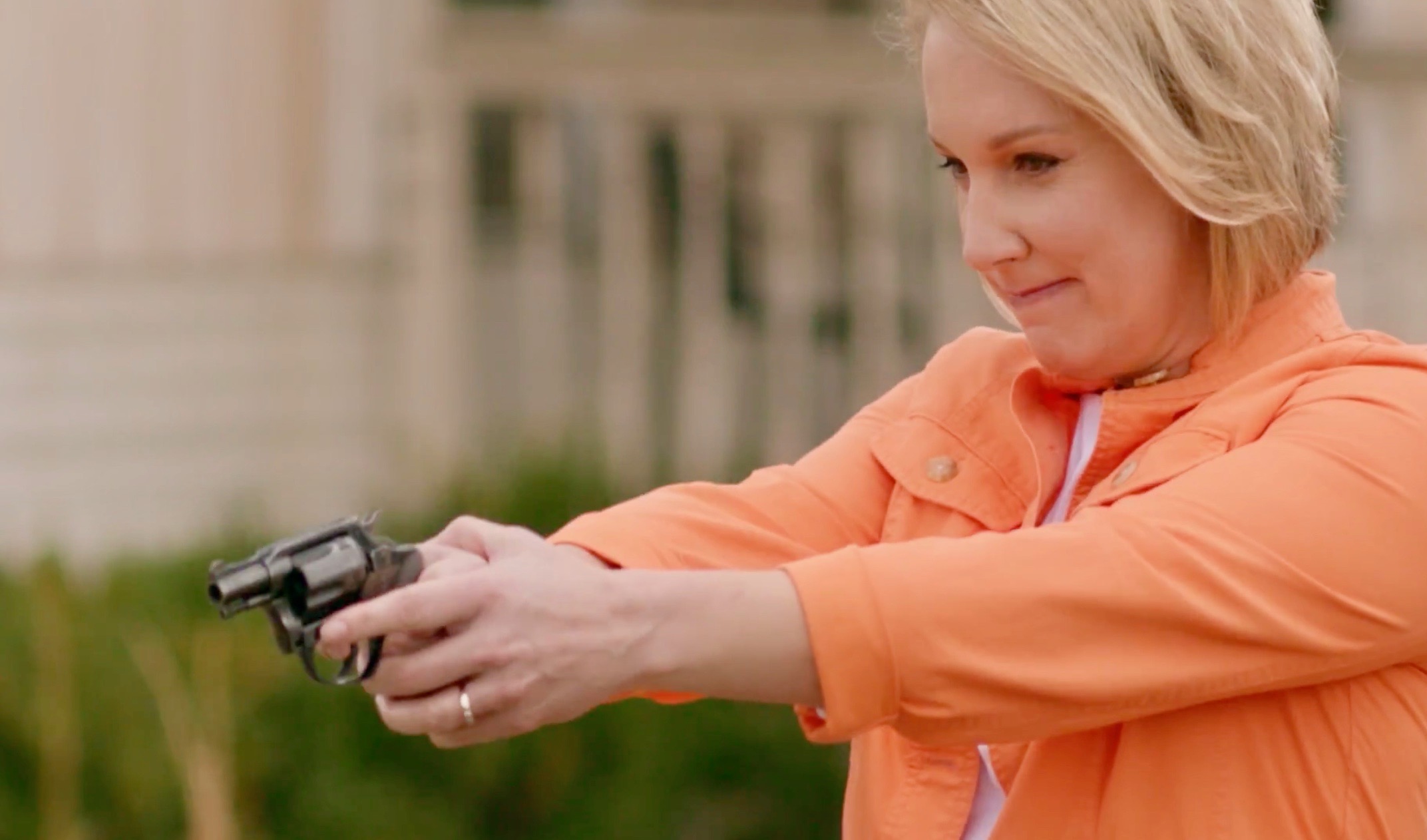 South Carolina GOP gubernatorial candidate Catherine Templeton is out with a new television ad in which she fires a snub-nosed .38 caliber revolver at a rattlesnake.

“Living in Fair Play, my granddaddy gave me this .38 to shoot the snakes around our fishing trailer,” Templeton says in her newest 30-second spot.

Fair Play, S.C. is a census-designated area located in Oconee and Anderson counties in the South Carolina Upstate.  It received its name centuries ago when two pioneers were urged to “play fair” during a brawl over a land claim.

As she rattles off the litany of offenses by career politicians in Columbia, S.C., the camera cuts to Templeton loading her grandfather’s revolver – which she then aims and fires at the curled serpentine.

“We can’t shoot the snakes slithering around Columbia, but we will end their poisonous big government ways,” Templeton concludes.

“People have talked for years about the need to stop public corruption in Columbia,” Templeton’s campaign manager R. J. May III said in a statement accompanying the launch of the ad. “There’s a difference between talking and doing. Catherine Templeton has a proven record as a member of Governor Haley’s cabinet. She means what she says and will following through on it as governor.”

“It’s terrible!” one Midlands, S.C. female voter told us. “So embarrassing for her.”

Another female voter liked the spot, though, telling us it was “memorable” and “had a good message.”

Others wondered whether Templeton shooting snakes was legal.

“Rattlesnakes are a protected species, right?” one Lowcountry lawmaker told us.  “Illegal to shoot?”

Actually, no … the eastern diamondback rattlesnake (crotalus adamanteus) was recently on the verge of being protected at the federal level, but it has yet to receive such a distinction.  South Carolina’s Code of Laws § 41-1-40 (B) provides penalties for any individual who “tortures, torments, needlessly mutilates, cruelly kills, or inflicts excessive or repeated unnecessary pain or suffering upon an animal,” but our guess is shooting a snake on one’s own property isn’t likely to result in charges being filed.

According to the S.C. Department of Natural Resources (SCDNR)’s latest venomous snakes advisory (.pdf), “it is best to leave all snakes alone, if you don’t know how to identify them, and to avoid trying to kill venomous snakes.”

“Don’t tread on Templeton,” another lawmaker told us.

Our favorite response, though?

“I don’t know whether to be impressed, embarrassed, afraid or sexually aroused,” one Upstate GOP lawmaker said.  “This is gonna take some time to figure out.”

Guns have been a factor in Templeton’s campaign for the GOP nomination – which pits her against incumbent “Republican” governor Henry McMaster and two credible contenders, Upstate businessman John Warren and lieutenant governor Kevin Bryant, who also hails from the Upstate region of the state.

Two months ago, Templeton drew heat for her oft-repeated stump speech claim that the S.C. State Law Enforcement Division (SLED) told her to get a concealed weapons permit (CWP) to protect herself from angry bureaucrats during her two stints as a member of former governor Nikki Haley‘s administration.

“The State Law Enforcement Division actually called and said, ‘Catherine, we need you to get a concealed weapons permit; we need you to start carrying, and we need you to protect yourself because of you’ve made a lot of people mad,’” Templeton said in one of her campaign web advertisements.  “And I’m not finished doing the right thing, so I still carry it.”

The Race For Bobby Harrell’s Seat Is On