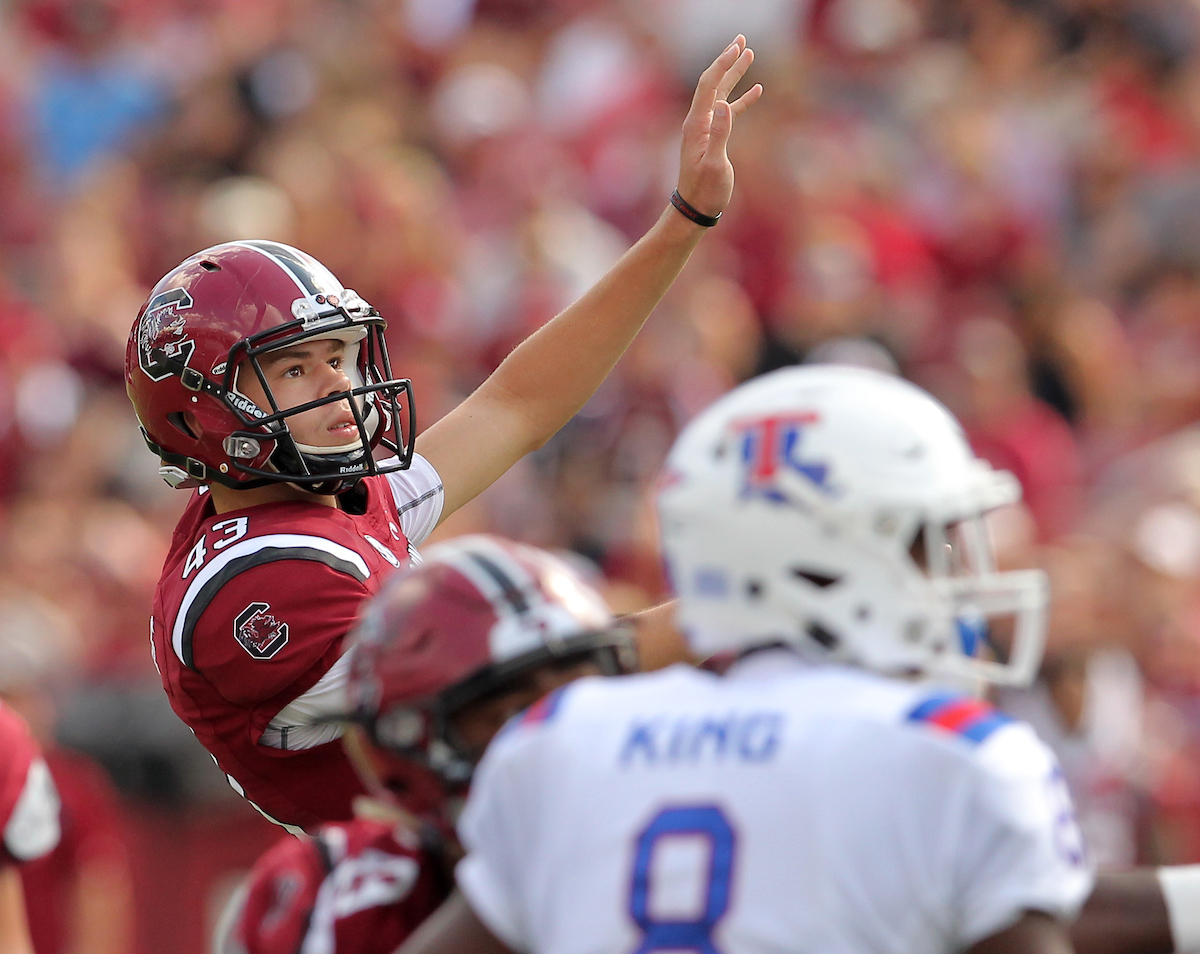 Second-year University of South Carolina head football coach Will Muschamp needed to win each one of this season’s first four games in order for the Gamecock football program to ensure it would be taking a solid step forward from last year’s 6-7 mark.

He got three of them … and the last one just barely.

Redshirt freshman placekicker Parker White connected on a 31-yard field goal with just four seconds left on the clock to give South Carolina a come-from-behind (twice) 17-16 win over Louisiana Tech.   The 6-foot-4, 195-pound Mount Pleasant, S.C. native had missed on his previous four attempts as a collegiate kicker – including twice earlier in this otherwise uninspiring game against the upstart Bulldogs of Conference-USA, coached by former South Carolina offensive coordinator Skip Holtz.

Parker drilled the one kick that mattered, though … capping a stunning, six-play, 65-yard drive that included a pair of game-saving miracles from sophomore quarterback Jake Bentley, who improved to 7-4 as the Gamecocks’ starting quarterback.

The Gamecocks seemed done for … their season even more wrecked than it was after last week’s humiliating home loss to perennial SEC East bottom dweller Kentucky.

But Bentley had a pair of potentially season-saving plays left in him … the first being a 24-yard scramble on third-and-ten from South Carolina’s 21-yard line that put the Gamecocks in position for what followed, a circus-style 41-yard reception by sophomore wide receiver Bryan Edwards that set up Parker’s game-winning kick. 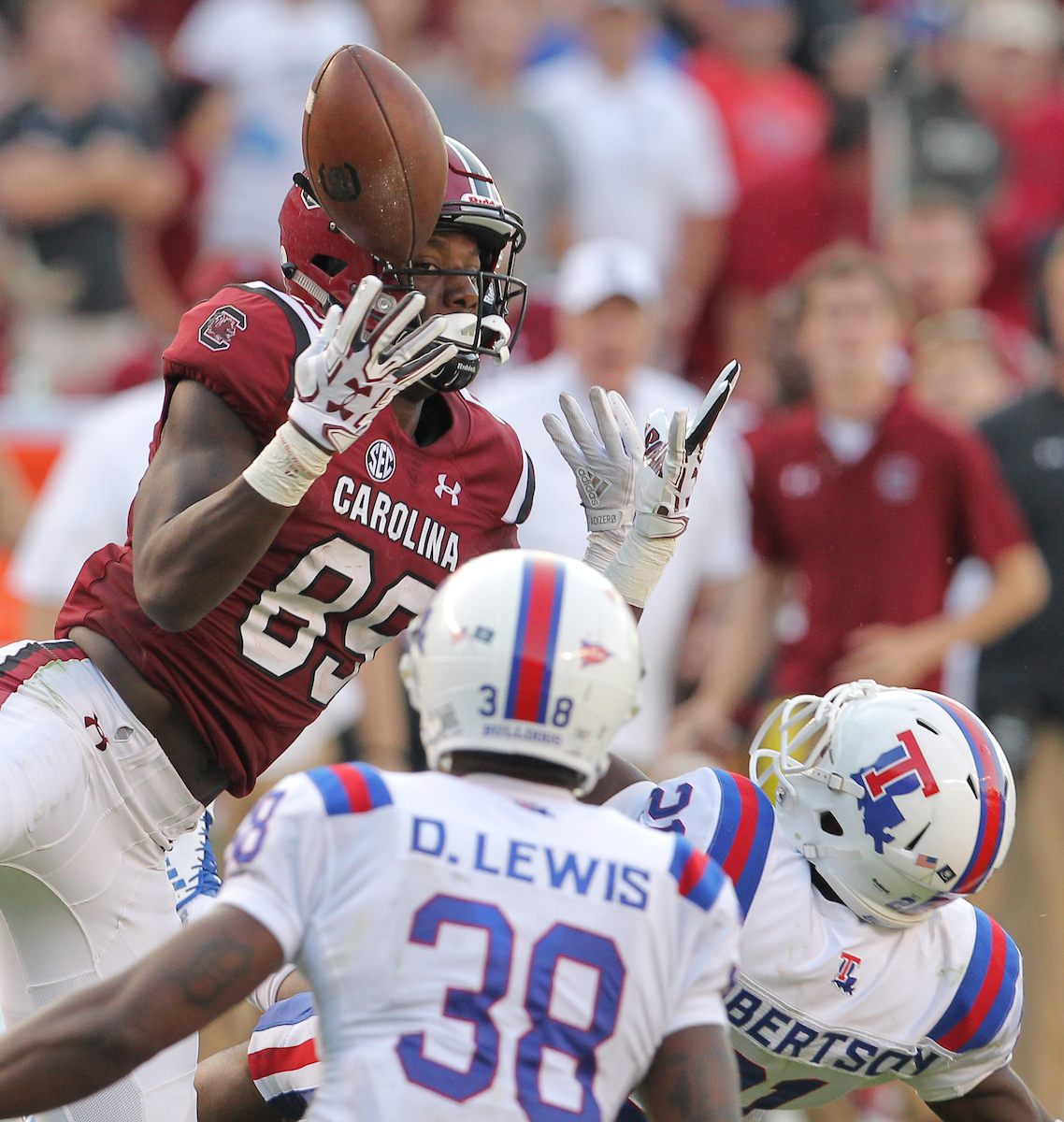 Edwards wasn’t even the intended receiver on the play (above), but he leapt into position to make the bobbling catch that helped put South Carolina in position for Parker’s last-second heroics.

“Bryan wasn’t even really my read,” Bentley said of the throw-and-catch with Edwards, “but when I saw him put his hand up I knew he was going to go get it for me.”

Samuel – who broke his leg during last week’s loss to Kentucky – entered Williams-Brice stadium on a golf cart, still unable to put weight on his injured ankle after undergoing potentially season-ending surgery six days ago. 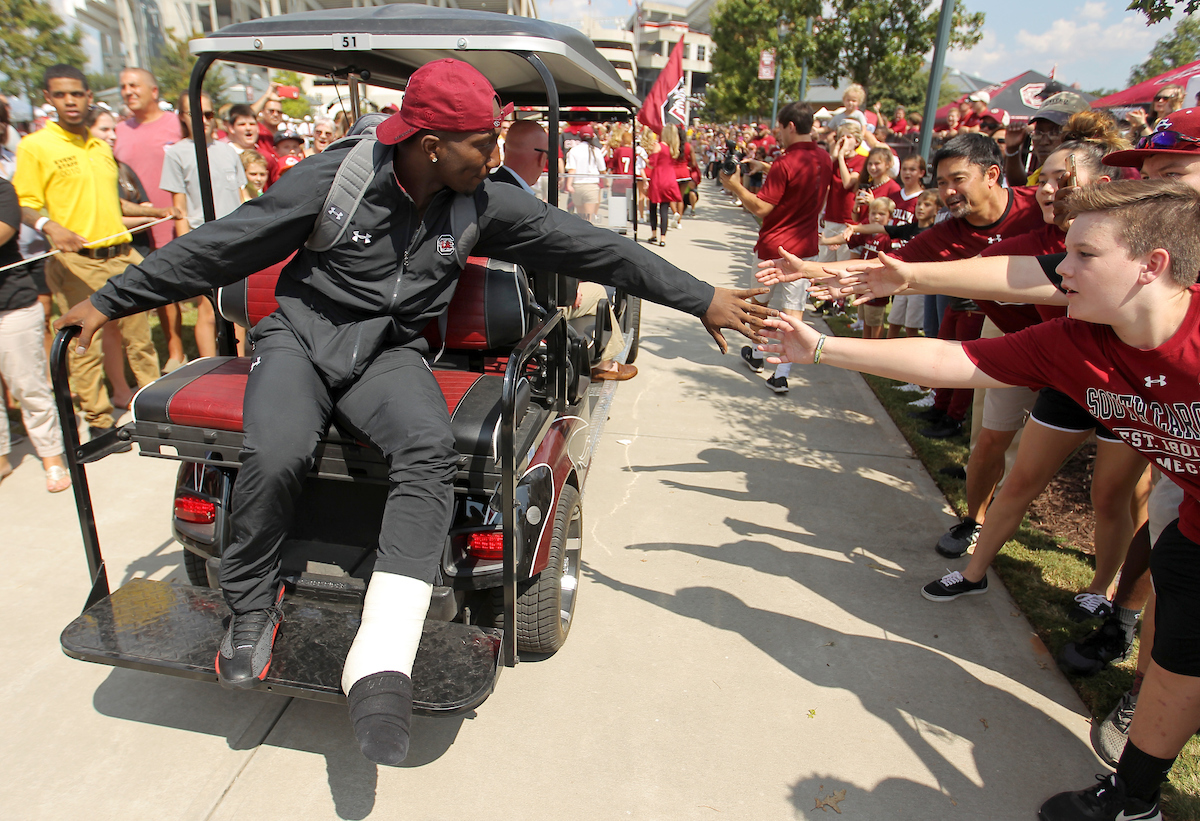 In addition to the loss of their top offensive playmaker, the Gamecocks were also playing without their top offensive lineman – junior Zack Bailey.   The 6-foot-6, 311-pound right tackle suffered a high ankle sprain against Kentucky and did not suit up Saturday against the Bulldogs.  Things got even worse for South Carolina up front when redshirt senior guard Cory Helms went down with a knee injury against Louisiana Tech, but Muschamp told reporters after the game Helms’ injury wasn’t serious and he would be listed as “day to day.”

The Gamecocks will need both linemen back as they enter the meat of their Southeastern Conference schedule next week on the road against Texas A&M.

They’ll also need for their previously anemic rushing attack to build upon the modest progress it showed late in the game against the Bulldogs.  Transfer Ty’Son Williams easily had his best game in garnet and black, rushing for 95 yards on 13 carries – including a 35-yard touchdown run in the fourth quarter that gave South Carolina its first lead of the game. 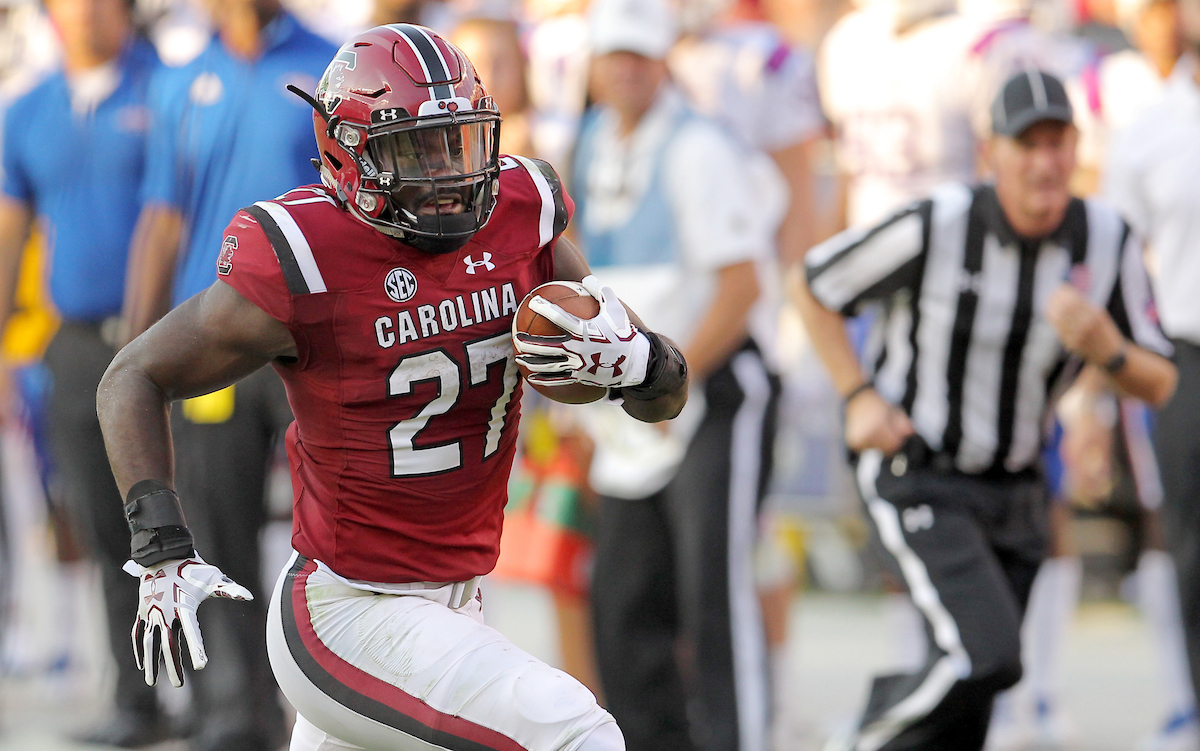 Williams’ touchdown run was only the second score by a South Carolina tailback through four games this season – evidence of the extent to which the Gamecock ground game has struggled in 2017.

Courtesy of the University of South Carolina athletics department, here are the official stats for Saturday’s game …

Up next for South Carolina is a matchup against Texas A&M at Kyle Field in College Station, Texas.  Kickoff is scheduled for 7:30 p.m. EDT with the SEC Network providing national coverage.  Head coach Kevin Sumlin’s Aggies (3-1, 1-0 SEC) outlasted Arkansas 50-43 this week in an overtime thriller played at AT&T Stadium in Dallas, Texas.

The Gamecocks have never beaten Texas A&M, losing to Sumlin’s squad in each of the last three seasons.

Bruce Bannister Was Just The Bag Man … Where Was The Will Lewis Money Supposed To Come From?