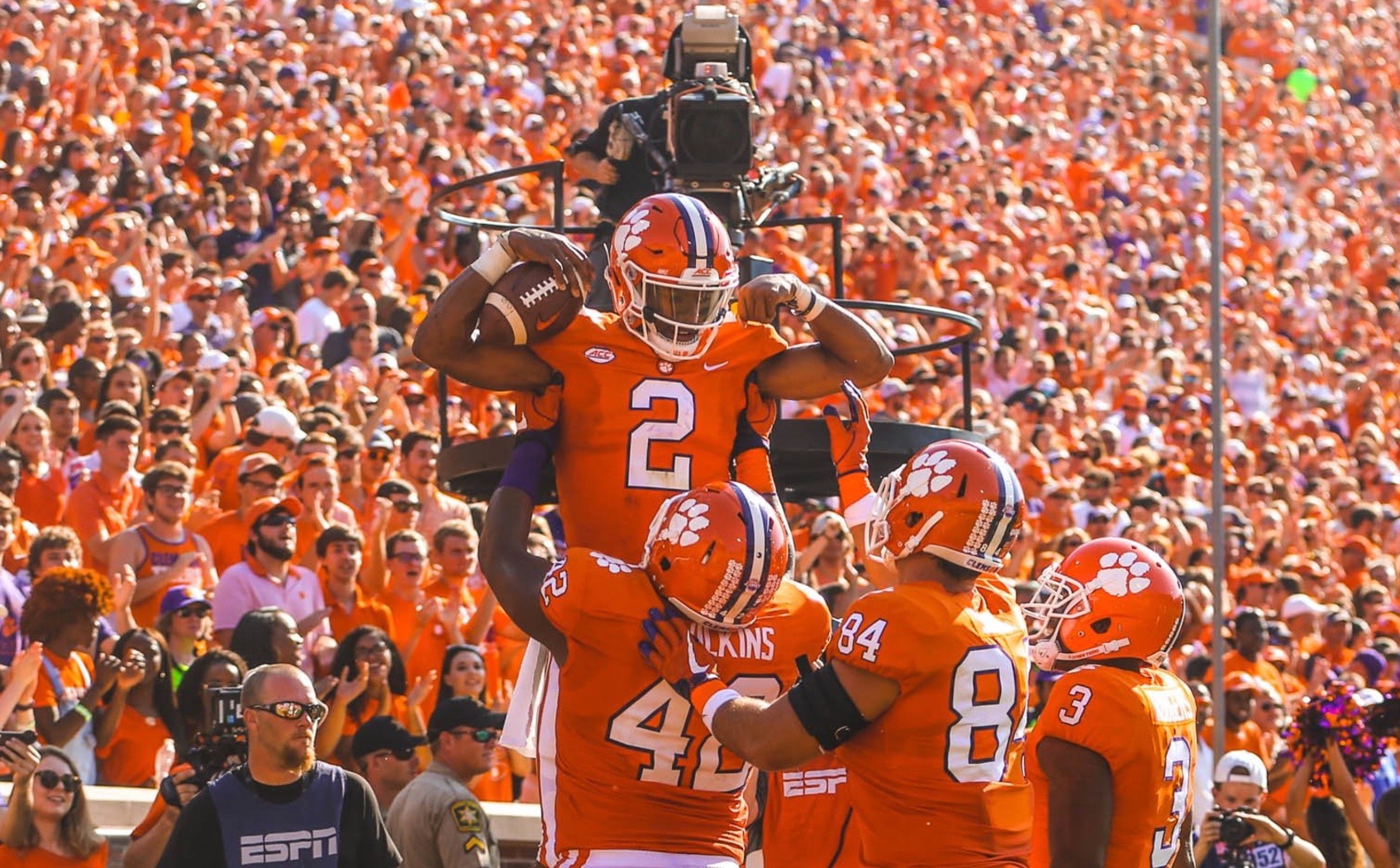 Clemson’s true freshman running back Travis Etienne ran for 113 yards on just nine carries – including a pair of touchdowns in the fourth quarter.  The 5-foot-10, 200-pound native of Jennings, Louisiana broke the game open with a 50-yard yard touchdown scamper that gave Clemson a 21-7 edge with just over five minutes left to play in the game.  Meanwhile junior quarterback Kelly Bryant – making only his fourth career start – racked up 106 yards on the ground, including two rushing scores of his own.  Bryant added another 140 yards through the air to stay undefeated as the Tigers’ starter.

The Tigers’ retooled offense went three-and-out four times, and Bryant threw a pair of costly interceptions.  But Clemson rallied when it mattered, scoring touchdowns on the final four drives of the game to seal the win.

“I was a little frustrated because I thought we were going to finish on a few drives early, but I knew it was going to be a tight first half,” Swinney said after the game.  “I felt like we could eventually wear them down, and we scored 27 unanswered points.  And that’s what good teams do when they finish the right way in a hard-fought game.  At the end of the day, you’ve got to play four quarters, and that’s what our guys did.  We stayed patient.  We tried not to get frustrated.  We had a couple of turnovers that hurt us.  But we had 368 rushing yards, which made all of the difference.”

Clemson’s vaunted defensive unit continued its dominance, holding the Eagles (1-3, 0-2 ACC) to only 238 total yards.  Boston College converted just 25 percent of its third downs, too, and was held to just one third quarter touchdown – a short drive keyed by a long punt return.

Junior defensive end Austin Bryant led the way for the Tigers’ defense, recording a sack and two tackles for losses.

“I think we are in a good place, but there is so much room for us to still improve,” Bryant said after the game.  “We played great today, but we made a lot of mistakes that people don’t notice, but the coaches see it and we know it.  I’m looking forward to getting back to work this week … looking at the film and seeing the good spots and the bad spots and correcting those for our big matchup this weekend against Virginia Tech.”

Courtesy of the Clemson University athletics department, here are the stats from Saturday’s game …