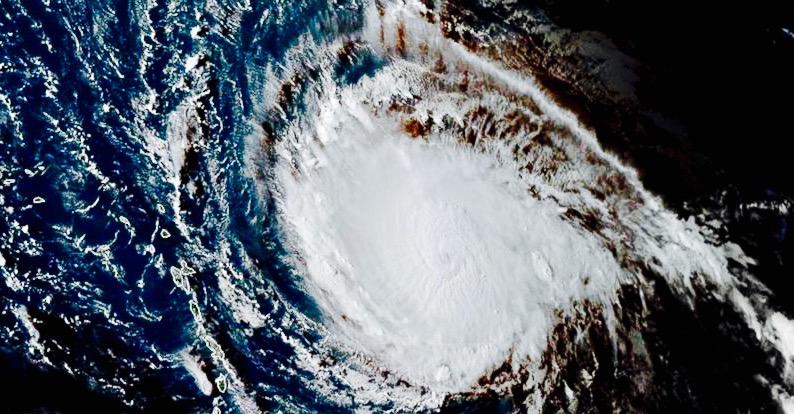 Hurricane Irma has strengthened into a category five storm – the highest magnitude on the Saffir-Simpson scale. – and appears to be drawing a bead on the state of Florida.

According to the latest advisory from the National Hurricane Center (NHC) in Miami, Florida, this “potentially catastrophic” tropical system is now packing maximum sustained winds of 180 miles per hour – making it the most powerful cyclone to appear in the Atlantic Ocean since Hurricane Wilma in 2005.

Located 225 miles east of Antigua, Irma is moving due west at approximately 14 miles per hour.

“This general motion is expected to continue today, followed by a turn toward the west-northwest tonight,” forecasters warned. “Some fluctuations in intensity are likely during the next day or two, but Irma is forecast to remain a powerful category four or five hurricane during the next couple of days.”

Looking longer term, here is the latest five-day forecast window for the storm … 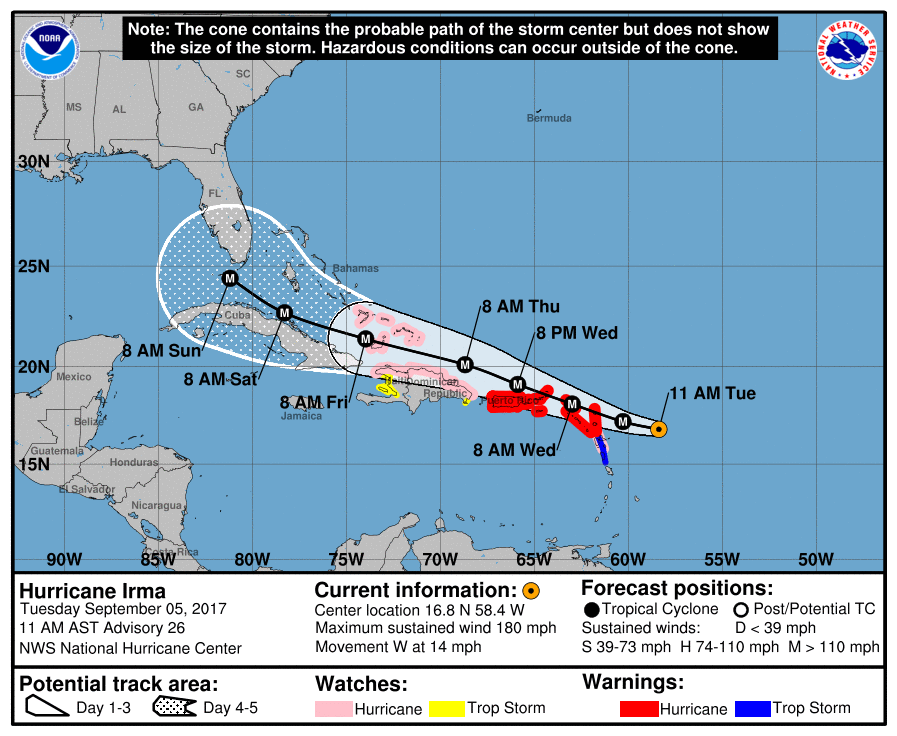 Clearly neither of those graphics bode well for the state of Florida, which is already under a state of emergency as local officials prepare for Irma’s likely arrival early next week.

“Florida must be prepared,” governor Rick Scott said in issuing his order. “In Florida, we always prepare for the worst and hope for the best.”

“This hurricane has the potential to be a major event for the East Coast,” noted Evan Myers, expert senior meteorologist and chief operating officer at AccuWeather.  “It also has the potential to significantly strain FEMA and other governmental resources occurring so quickly on the heels of Harvey.”

Irma’s march toward Florida comes as the United States is still reeling from Hurricane Harvey, a category four monster that came completely out of nowhere late last month to hammer Texas with unprecedented rainfall and catastrophic flooding.

Harvey is likely to be the costliest natural disaster in American history – not because of the impact of its landfall, but because the system got stuck in a holding pattern over southeastern Texas for several days after coming ashore.

Also worth noting?  Irma isn’t the only active storm in the Atlantic.

Tropical Storm Jose formed on Tuesday morning approximately 1,500 miles east of the Lesser Antilles.  This system is projected to become the 2017 season’s fifth named hurricane by Friday, although it’s far too early to say whether it will impact the American mainland.

For those of you keeping score at home, Hurricane Patricia still holds the record for the highest sustained winds ever recorded in connection with a tropical cyclone – at 215 miles per hour.  That measurement was recorded on October 23, 2015 shortly after the system formed in the Pacific Ocean off the coast of Mexico.

The record for Atlantic Basin storms still belongs to Hurricane Allen, which registered maximum sustained winds of 190 miles per hour as it moved through the Yucatán Channel in early August of 1980.