The director of the S.C. Department of Employment and Workforce (SCDEW) may lose her job over a text message she allegedly sent making fun of her boss, governor Henry McMaster.

Cheryl Stanton – a New York attorney hired by former governor Nikki Haley to run this agency in May of 2013 after a myriad of scandals – has been accused of circulating a text message last month mocking McMaster following the death of his beloved pet bulldog, “Boots.”

Yup … this is really happening.  This is seriously what the leaders of South Carolina’s $29 billion state government are up to this week.

According to multiple sources familiar with the situation, Stanton responded to Boots’ passage last month by sending a message from her personal cell phone that read as follows …

Now that Boots (died) who is going to run South Carolina?

According to our sources in the governor’s office, though, the humor was lost on the state’s new chief executive.  In fact, sources close to McMaster tell us he was “livid” upon being shown a copy of the text.

McMaster – who has reportedly been “gunning for (Stanton)” for some time – may now use the dust-up as an excuse to fire the embattled SCDEW director. 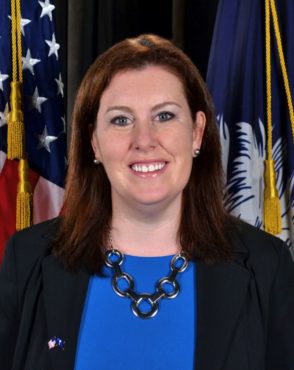 This website has been sharply critical of SCDEW for several years – including a story last spring detailing costly issues with a controversial unemployment benefits program.  We also busted the agency a few years ago deliberately deceiving lawmakers regarding just how bad its budget situation had become.

Both of those stories broke during Stanton’s tenure – although to her credit she did inherit a dumpster fire at SCDEW.

Previously, our reporting ultimately on this agency led to the resignation of the its scandal-scarred former director, Abraham Turner.  And while there were any number of reasons Turner could have been let go, his resignation was announced just days after we exclusively reported on SCDEW doling out $54.5 million in “improper claims.”

In other words, that was a legitimate grounds for termination.

Firing Stanton over a text message?  That seems silly.  Petty, even.  Especially seeing as she wasn’t the only one circulating such messages at the time of Boots’ unfortunate demise.

“Everyone was talking about it (being) a ‘constitutional crisis’ because we elected Boots and now he is dead,” one defender of Stanton noted.  “She wasn’t alone.”

That’s true … in fact one particularly hilarious message we received at the time referred to Boots as “the Bulldog who knew too much,” a reference to the mushrooming scandal surrounding neo-Confederate political consultant Richard Quinn, McMaster’s longtime political advisor.