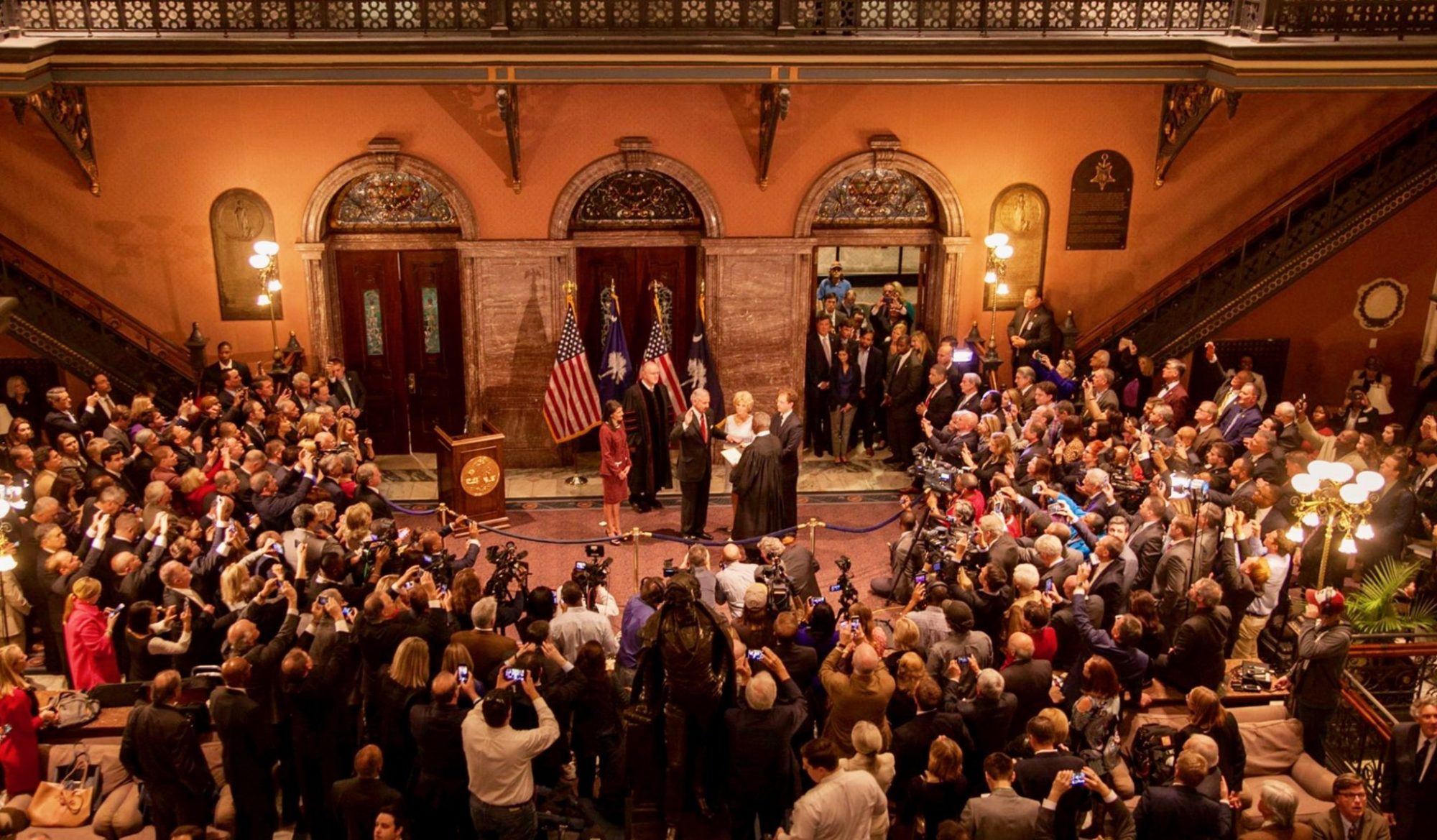 GOVERNOR SAYS HE PLANS TO “CONTINUE WORKING WITH” SCANDAL-SCARRED CONSULTANT …

S.C. governor Henry McMaster said he is sticking with his embattled, neo-Confederate political consultant even though the advisor, Richard Quinn, has been implicated in an ongoing investigation of public corruption at the S.C. State House.

Neither Quinn nor his son – powerful S.C. Rep. Rick Quinn – have been indicted in connection with the probe, but the elder Quinn’s name did appear in a three-count indictment filed against veteran State Senator John Courson earlier this week.

The names of both Quinns also appeared in a December 2013 S.C. State Law Enforcement Division (SLED) report that serves as the basis for the investigation.

According to the charges brought against Courson – a longtime ally of the Quinns – roughly $250,000 was paid over a four-year period from Courson’s campaign account to First Impressions, Inc., a company run by Quinn.  That company turned around and paid Courson $130,000 in “multiple transactions.”

Several of the alleged kickbacks to Courson came during the time he was starring in some shady political ads produced by the Quinns on behalf of U.S. Senator Lindsey Graham, who at the time was the lone Republican in Washington, D.C. backing former president Barack Obama’s carbon tax hike.

Courson was suspended from his Senate office in the aftermath of the indictments.

“We’ve worked together for a lot of years on political things, and I intend to continue working with them,” he told The (Charleston, S.C.) Post and Courier.

“Henry is very loyal,” a confidant to McMaster told us.  “He would never turn his back on someone during a difficult time.”

McMaster’s office told The (Columbia, S.C.) State newspaper that the governor has not received any money from Quinn – who has managed his political destiny for decades.

McMaster supporters have confirmed as much to us.

According to sources familiar with the probe, the Quinns were first mentioned to investigators by suspended S.C. Rep. Jimmy Merrill – who was slapped with a thirty-count indictment back in December that could land him in jail for more than six decades.

Merrill has yet to negotiate a plea deal with prosecutors – and could be facing additional charges in connection with the investigation, which is being led by S.C. first circuit solicitor David Pascoe.

Previously, Pascoe’s probe brought down powerful former S.C. Speaker of the House Bobby Harrell.  After pleading guilty to six ethics violations in October 2014, Harrell resigned his office, received three years of probation and agreed to cooperate with prosecutors – which he has done.

Gamecocks NCAA Drought Is Over!