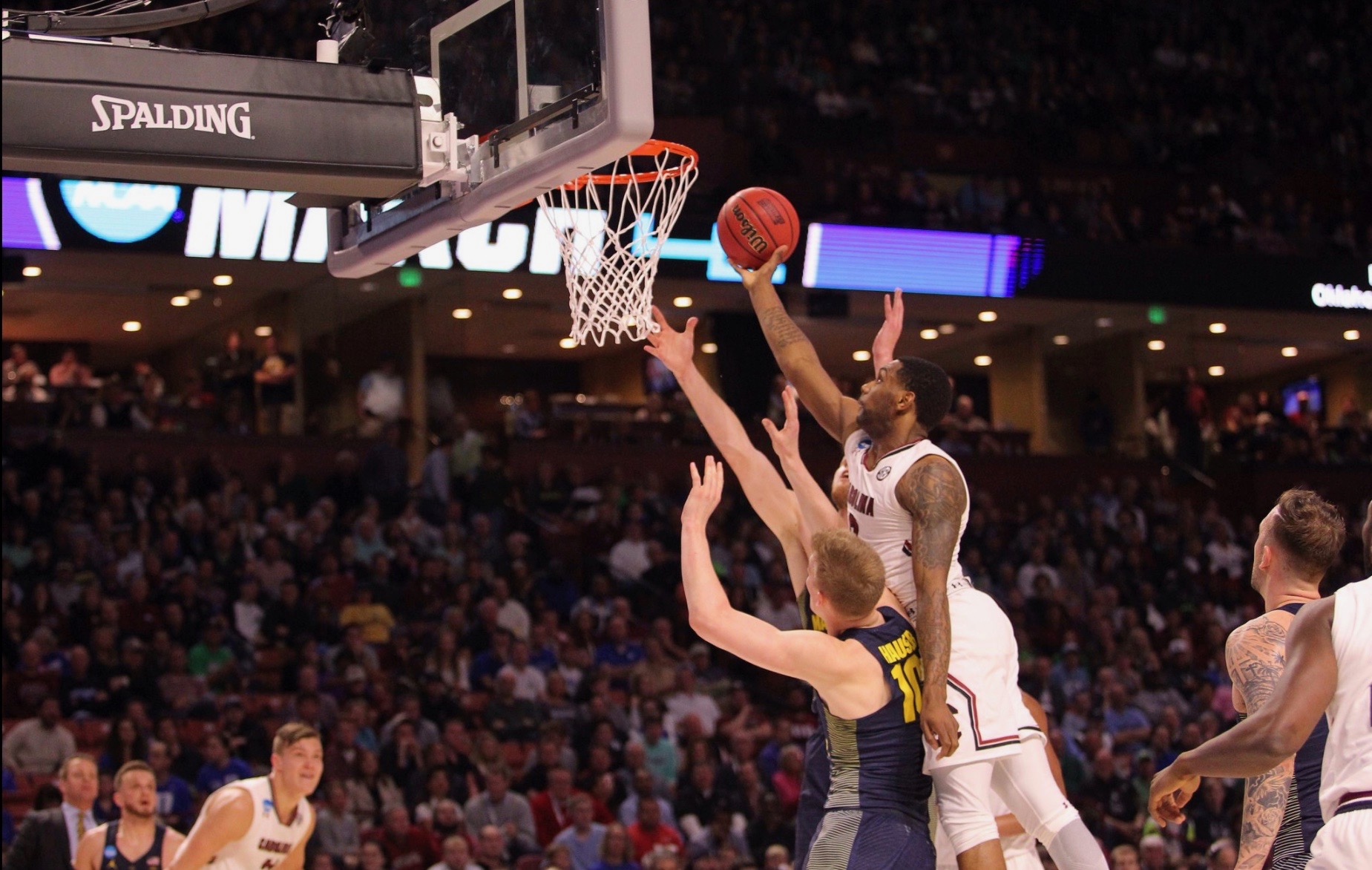 The University of South Carolina men’s basketball team won its first NCAA tournament game in forty-four years on Friday night, blowing past Marquette in the first round of the East Regionals in Greenville, S.C.

Making its first tournament appearance since 2004, head coach Frank Martin’s team overcame a sluggish start (and a sluggish end to their season) to earn the historic victory.

Now the Gamecocks (23-10) have a date against perennial NCAA championship contender Duke – which has appeared in the “Big Dance” 33 times under legendary head coach Mike Krzyzewski (including 28 appearances as a top-three seed).

Krzyzewski’s teams have won five championships and reached the Sweet Sixteen 22 times over that stretch – winning a total of 91 tournament games (a record).

The Gamecocks’ 93-73 win was keyed by Southeastern Conference player of the year Sindarius Thornwell – who scored 29 points and grabbed 11 rebounds against the Golden Eagles (19-13).  Thornwell took control down the stretch, as South Carolina turned a nip-and-tuck affair into a blowout during the final nine minutes of the game.

Marquette raced out to an 8-0 lead to start the game – and led by as many as ten points during the first half.  In fact, head coach Steve Wojciechowski‘s team never trailed during the opening stanza – connecting on eight three-pointers against the SEC’s top-rated defense.

The second half was a different story.  South Carolina’s defense collectively stiffened – holding the Golden Eagles to just three three-pointers (and keeping them completely off the scoreboard for a critical four-minute stretch during the final stanza).

A big reason for their success?  Aggressive rebounding.  Martin’s team out-boarded Marquette 36-28 – including a 13-6 edge on the offensive glass.  The Gamecocks also forced twelve of Marquette’s eighteen turnovers during the final frame.

South Carolina faces the second-seeded Blue Devils (28-8) on Sunday evening.  That game tips off at 9:45 p.m. EDT and will be televised nationally by TNT.

The winner will advance to the Sweet Sixteen at Madison Square Garden in New York City.

Whatever happens the rest of the way for South Carolina, Martin’s program has clearly taken another major step forward.  After inheriting a program in shambles in 2012, the Miami, Florida native pushed the Gamecocks past the break-even point two years ago and narrowly missed the “Big Dance” at the end of last season.

Assuming recruiting holds up (and to hear some tell it that’s a big “if“), Martin could make South Carolina a perennial NCAA team – like he did during his five seasons at Kansas State.