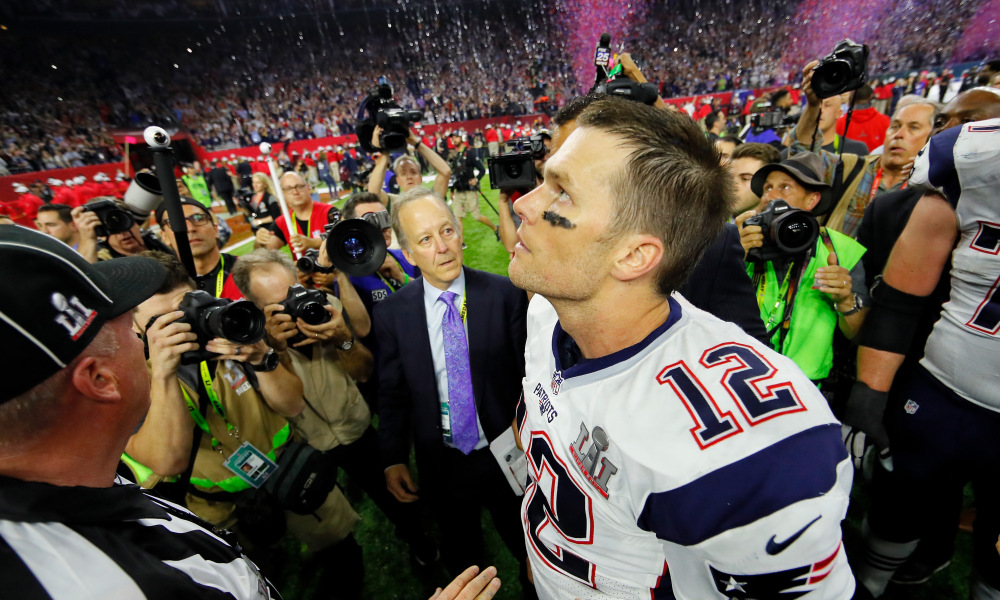 American sports fans have been spoiled lately, haven’t they?

There was no way the National Football League’s Super Bowl could compare, could it?  Of course not … and through three-and-a-half quarters, it didn’t.

When Atlanta Falcons’ quarterback Matt Ryan hit tailback Tevin Coleman for a six-yard touchdown pass with 8:31 left in the third quarter, Super Bowl LI was as good as over.  Hell, there was more drama over Lady Gaga’s halftime show than there was on the field.  With two thirds of the game in the books, Atlanta led 28-3 – a margin two-and-a-half times bigger than the greatest deficit ever overcome in a Super Bowl game.  Plenty of Patriot fans had already shut down their parties, sent their friends home and turned off their televisions – unable to stomach anymore of what they were witnessing.

Social media?  It was nothing short of an impaling excoriation of New England quarterback Tom Brady – who missed the first four games of the 2016 season in the aftermath of the infamous “Deflate-gate” scandal.  The future Hall-of-Famer also committed the cardinal sin of publicizing his friendship with the most demonized man in America – U.S. president Donald Trump.

The hate was real …

But at the moment when all seemed lost – when his legacy seemed likely to take one on the chin – Brady dug deep and turned in the single greatest performance of what is now unquestionably the greatest NFL career of all-time.

Playing for his critically ill mother, Brady led his team to the most improbable comeback in NFL history – perhaps in the history of sports.  It was a performance that defied reason – and defined his legacy.

The march toward history began with just over six minutes left in the third quarter when the Patriots converted a fourth down from their own 46-yard-line – sustaining what would wind up being their first touchdown drive of the game.  Brady also scampered for a huge 15-yard gain on a third-and-long that kept that drive alive.

If either of those two plays hadn’t been made, what followed never would have happened.

In fact the momentum from New England’s first touchdown of the game didn’t last long.  Kicker Stephen Gostkowski missed the extra point, then illegally touched the football on an ensuing onside kick attempt that the Patriots otherwise would have had an excellent chance of recovering.

Atlanta was back in control – or so it seemed.  Even after New England came up with a critical defensive stop, Brady and the Patriot offense had to settle for a field goal with nine minutes left to cut the Falcons’ margin to 28-12.

It was just too big a deficit.  With too little time remaining on the clock, right?

Certainly the long-suffering Falcons – hoping to bring Atlanta its first professional sports title since the Braves’ 1995 World Series win – thought that was the case.  Little did they know they were already caught in fate’s ignominious vortex – which had them hurtling headlong toward the event horizon of the greatest sports collapse since golfer Greg Norman blew a six-stroke lead on the final day of the 1996 Masters.

Five plays after New England’s defense forced Atlanta’s first turnover of the game – a strip-sack of Ryan – Brady connected with wide receiver Danny Amendola for a six-yard scoring strike.  After a successful two-point conversion, the four-time world champions found themselves down 28-20 with just under six minutes to play.

Was the impossible now possible?  Yes … but …

Even after New England’s defense forced an Atlanta punt, the odds still seemed stacked against Brady and company.  In order to tie the game and force the first overtime in Super Bowl history, they would have to go 91 yards in less than two-and-a-half minutes – scoring a touchdown and another two-point conversion.  Also, Brady would have to complete this “drive to end all drives” without his favorite target, Rob Gronkowski.  The top tight end in the NFL, Gronkowski missed the Patriots’ entire postseason run after undergoing surgery for a back injury sustained in late November.

Such a drive is no small task – but like John Elway thirty years ago in Cleveland, Brady was more than up for it.

The biggest play of the Patriots’ game-trying march is one few will ever remember.  It was a clutch, sixteen-yard strike from Brady to wide receiver Chris Hogan that converted a critical third down deep in New England territory.  Probably the best ball Brady threw all night.

Why will no one remember that grab?  Because of the one that happened three plays later …

That’s Patriots’ wide receiver Julian Edelman making the greatest Super Bowl catch since New York Giants’ wide receiver David Tyree stunned New England in Super Bowl XLII with his famous “helmet catch.”  On what should have been a game-ending interception, no less.  On Brady’s worst throw of the night.

Edelman’s improbable reception – confirmed after Atlanta challenged the ruling on the field – covered 23 yards and put the Patriots in Falcons’ territory.  Four plays later, running back James White dove into the end zone for his second touchdown of the game.  Brady connected with Amendola on the ensuing two-point conversion, and the stage was set for the first overtime in Super Bowl history.

Atlanta had no way of knowing it, but their league-leading offense – led by Ryan, the 2016 NFL MVP – would never see the field during the extra stanza.  New England won the overtime coin toss and chose to receive the football –  and Brady capped the greatest comeback of all-time with an eight-play, 75-yard touchdown drive (overtimes in the NFL are sudden death affairs in the event the first score is a touchdown).

Brady finished the game completing 43 of 62 passes for 466 yards – all Super Bowl records.  He was named the game’s MVP for the fourth time in his career, another record.  And he left no doubt as to his status as the greatest player ever to lace up cleats – a truly remarkable accomplishment given his status as a sixth-round draft pick who only got a shot as a starter because somebody else got injured.

In our “participation trophy” world – which doles out superlatives more liberally than government spends money – Brady’s performance was genuinely remarkable.  Legitimately amazing.  Authentically epic.  It was also something the NFL – beset by sagging ratings all season long – desperately needed.