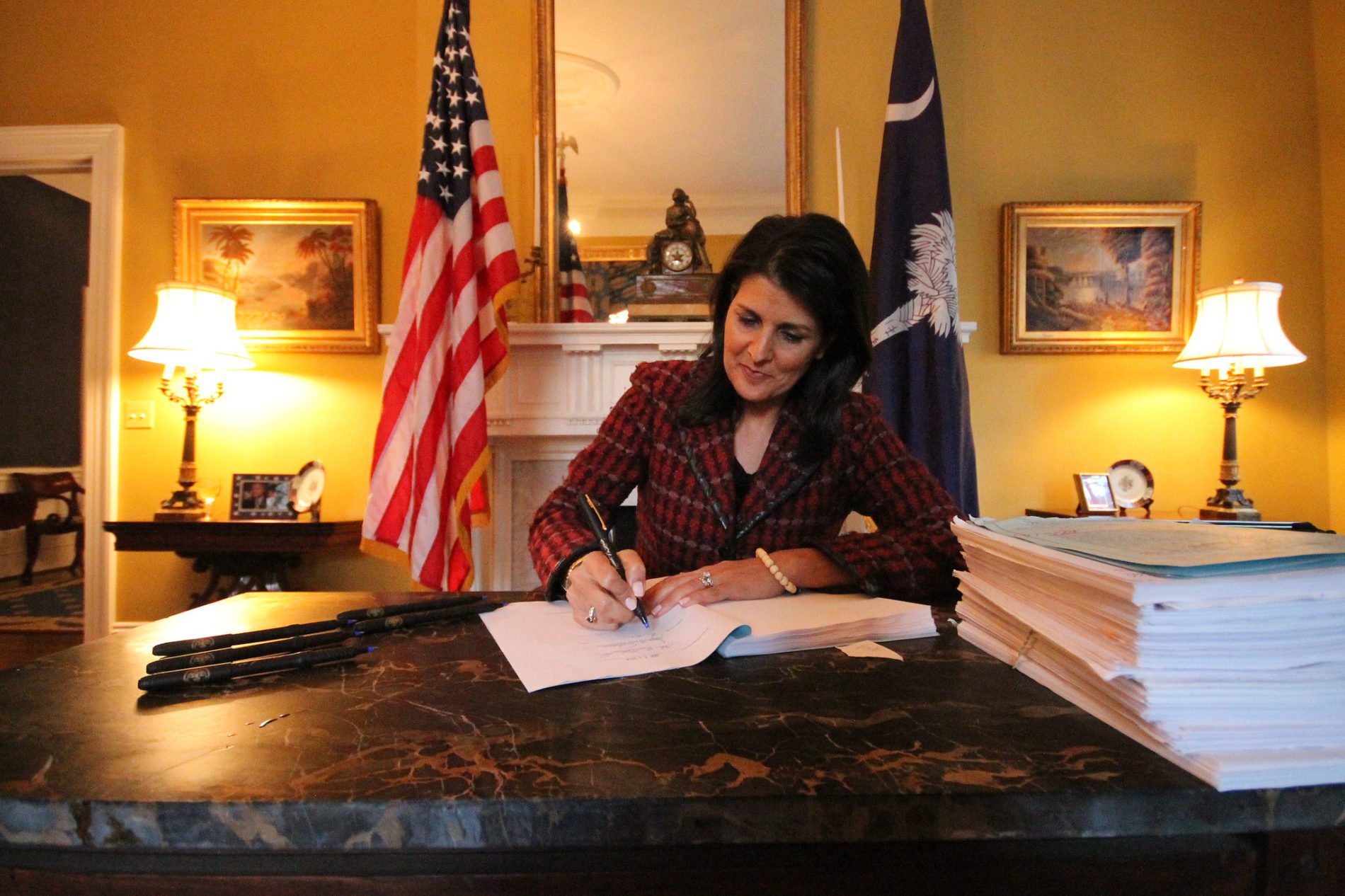 GOVERNOR’S FINANCIAL DECLARATION REVIVES QUESTIONS ABOUT HER CHECKERED FISCAL PAST …

Jaws across the Palmetto State dropped this week when S.C. governor Nikki Haley – who is on the verge of becoming the next American ambassador to the United Nations – revealed just how messy her personal finances are.

Haley had to disclose certain personal financial data in connection with her looming appointment to the cabinet of U.S. president-elect Donald Trump – and to say her declaration was embarrassing would be an understatement.

“How did she get past vetting with that?” one S.C. Republican activist wondered.

People simply couldn’t believe that the governor and her husband Michael Haley (who reported absolutely no income on the forms) had somehow managed to amass between $500,000 and $1 million worth of debt after taxpayers spent six years subsidizing their housing, food and travel expenses.

All while Haley drew a six figure government salary (plus benefits).

Perhaps an even better one is this: Did Haley include everything she should have on her financial disclosure forms?

Because let’s be honest: When it comes to Nikki Haley and financial disclosures things can get “Trikki.”  Very, very Trikki.

In 2014, for example, this website ran an exclusive report on a questionable mortgage transaction involving Haley, her husband and her parents – Ajit S. Randhawa and Raj K. Randhawa.

Here’s a look at that deal …

To recap: In April of 2014, Haley’s parents gave her and her husband a mortgage on a property located in Lexington County, S.C. in order to secure a $400,000 note.

In other words, Haley and her husband gave – or pledged to give – $400,000 to her parents in exchange for a security interest in this piece of property.

Eight months later – just a few days after her reelection as governor – Haley and her husband subordinated the lien priority of their mortgage to a new mortgage given by Nikki’s parents to Wells Fargo so that they (Haley’s parents) could secure a loan in the amount of $779,826.

In other words, Haley and her husband made their interest in the property subordinate to the Wells Fargo mortgage – enabling her parents to get the loan.

Confused?  So were we.

We were further flummoxed when we stumbled upon some California property records involving Haley and her husband.  Those records detail a pair of transactions that took place in 2013 in Monterey County.

We’ve heard all sorts of rumors about Haley’s connection to this California deal – including its alleged proximity to the Lexington county mortgage agreements concluded between the governor and her parents.

In fact we’re told the governor herself was bracing for the alleged “dots to be connected” back in 2014.

“They were waiting for someone to figure it out,” a source close to Haley told us.  “Clearly, no one did.”

Nor have they … yet.

All the California documents show is that Haley and her husband may have been assigned the rights to receive payments on something (perhaps a note) secured by a “deed of trust” – or a mortgage – on property in Monterey County, California in January of 2013.

Six months later, the Haleys then assigned this deed of trust to someone else.

This website has begun the process of pulling additional records from both Monterey County, California and Lexington County, S.C.  We’re also in the process of obtaining some Orangeburg County, S.C. property records that we’re told may have some bearing on this matter.

Haley’s financial relationship with her parents has made news in the past.  In August of 2008 – while still a member of the S.C. General Assembly – she submitted an online employment application to Lexington Medical Center, a regional hospital which wound up employing her for twenty months as a vastly-overpaid “fundraiser.”

Haley’s online application included a 2007 income estimate which vastly exceeded the amount of money she reported to the IRS that year.  Specifically, the application stated that she made $125,000 from her family clothing business in 2007 – however she reported only $22,000 in income to the government.

This website has no interest in disrupting Haley’s ascension to Trump’s cabinet.  As far as we’re concerned, the sooner she leaves South Carolina the better off the state will be.  But we do have a journalistic obligation to continue investigating this story – which we intend to do.