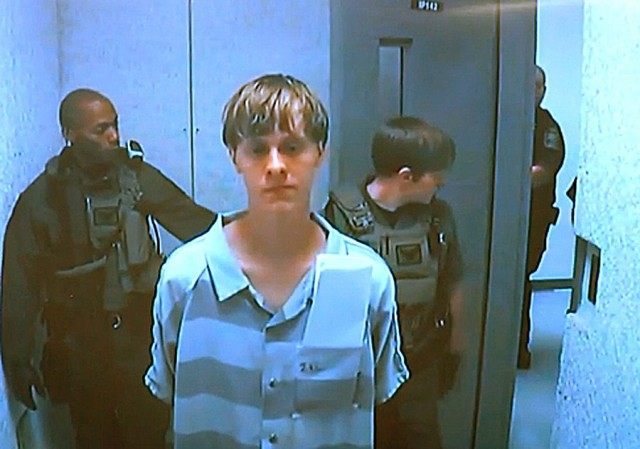 BUT NOT AT THE HANDS OF THE FEDERAL GOVERNMENT …

This website has written previously on the usurpation of state authority by the federal government in connection with the trial of confessed mass murderer Dylann Storm Roof.

Roof is facing nine counts of murder and one weapons charge at the state level in connection with the infamous “Holy City Massacre.”

At around 8:00 p.m. EDT on June 17, 2015, the 21-year-old white supremacist entered the historic Mother Emanuel AME Church in downtown Charleston, S.C. and asked for its pastor – S.C. Senator Clementa Pinckney.  After sitting next to Pinckney at a Bible study/ prayer meeting for approximately an hour, Roof opened fire on him and his parishioners – killing nine of them (including Pinckney).

Rather than let South Carolina handle the case, though, the federal government has intervened and launched a “hate crimes” trial – one that could result in the death penalty for Roof.

It’s also more than a little ironic considering it was the federal government which dropped the ball in enforcing its own background check law in this case.

This case is not complicated.  Roof has confessed to committing these crimes – and acknowledged his racist motivation in carrying them out.  Furthermore, the physical evidence affirming his confession is overwhelming.

In other words, federal intervention in this case is not necessary – because there has been no miscarriage of justice.

But this isn’t about justice – it’s about the federal government needlessly imposing its will over the states in pursuit of a politically correct “teachable moment.”  More importantly, it’s about the liberal U.S. Department of Justice (USDOJ) seeking to define “hate” exclusively as white versus black … even though there are countless examples to the contrary.

As we’ve stated repeatedly, all premeditated murders are hate crimes.  To assign labels on some (but not others) is to deliberately foment the very tension that feeds such murderous pathologies as Roof’s in the first place.

“It is precisely the sort of power play that sets blood needlessly boiling,” we noted earlier this month.

Make no mistake: We support the death penalty.  Vigorously so.  In fact we’ve argued in the past in favor of the “broad reestablishment of capital punishment … as a method of effectuating justice, deterring violent crime and saving taxpayers’ money.”

Of course the federal government doesn’t think so, which is why it has executed just three people in the modern era (and none in the last thirteen years).

Roof should pay for his crimes with his life … but it should have been the state of South Carolina, not the federal government, making that determination.