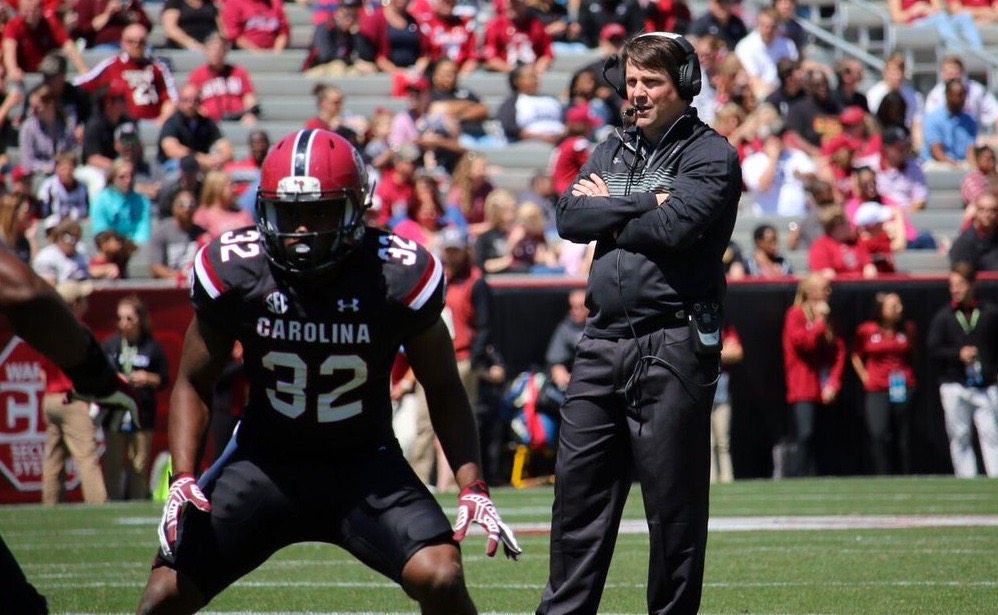 University of South Carolina head football coach Will Mushchamp gets knocked down. But he gets up again.

You’re never gonna keep him down …

“My father taught me that you’ve just got to get back up and work,” Muschamp wrote in an oped for Sports Illustrated’s Campus Rush.  “I’ve been knocked down before. But know this: I will get back up.”

In the column, Muschamp compares his failed stint as head coach of the University of Florida to a gruesome leg injury he sustained while playing high school baseball.

“I was playing leftfield when I raced in to catch a shallow pop?up. I called off the shortstop, but it had been raining before the game, and so he slipped and fell, his shoulder colliding with my right leg,” Muschamp wrote.  “Somehow I still caught the ball before crumbling to the ground. But when it was all over my right leg jutted out perpendicular to my body and a large part of my tibia and fibula poked through my skin.”

According to Muschamp, at that moment his dream of playing college football seemed to be over.

Muschamp made it back, though.

“I managed to walk on at Georgia, where I earned a scholarship as a redshirt freshman and was named captain my senior year, in 1994,” he wrote.  “So you see: I’d been knocked down and then gotten back up long before Florida dismissed me as its coach in 2014.”

Everybody picking up on the theme here? Gets nocked down. Gets back up again.  Never gonna keep him down.

“We did a lot of good things at Florida, had good kids in the locker room,” Muschamp said of his four seasons in Gainesville, where his squads posted a 28-21 mark (including a 17-15 record in SEC play). “We played strong defense and special teams. We simply had an issue on offense and that comes back on me.”

Spurrier coached the Gamecocks for ten-and-a-half seasons – including the school’s unprecedented run of national success between 2011-13.

Still, Muschamp has put together a solid coaching staff and managed to stave off what could have easily been a recruiting disaster.

Will these early positive steps translate into wins in 2016?

We shall see … but at this point there’s only so much further “down” the Gamecock program can be knocked before it must, out of necessity, “get back up again.”

Dabo Swinney To Texas? Not A Chance …