TRANSPARENCY? NOT AT THE S.C. STATE HOUSE …

During her 2010 campaign, then-S.C. Rep. Nikki Haley invoked a legislative exemption to keep her taxpayer-funded emails, computer records and public phone records private after she was accused of having two extramarital affairs.  Months later, she conducted a positively Nixonian release of mostly spam emails – refusing to let the press have access to the vast majority of her taxpayer-funded correspondence or her government-funded computer hard drives.

Two years later, in 2012, Haley again refused to release emails related to the whitewash of serious ethical violations leveled against her.

Those allegations were likely to pose a serious threat to her national ambitions … although Haley has effectively torpedoed herself on that count.

Lawmakers are continuing to invoke the “Haley rule” when it comes to shielding their legislative correspondence from public disclosure.  Meanwhile this critical transparency loophole has been left completely unaddressed by the so-called “ethics reform” bill currently moving through the S.C. General Assembly.

According to a letter sent last week from the S.C. House Ethics Committee, Gambrell is invoking the “Haley rule” in response to a Freedom of Information Act (FOIA) request submitted by his former runoff opponent, Rocky D. Burgess.

What was Burgess looking for?  Confirmation of a claim made by the fifth-term House member during the recent election …

According to Gambrell, his campaign finance reports – which were the subject of some controversy during the race – had been “audited” by the ethics committee and “no irregularities were found.”

Shocker, right?  This is what happens when lawmakers “self-police” – a practice this website has opposed for years.

Anyway, Burgess sent a FOIA request seeking a copy of the audit referenced by Gambrell.  Well … to the extent the ethics committee ever actually “audits” anything.

“The House Ethics Committee subcontracts out the audit to a private firm that simply matches income/ expense from filed reports with income/ expense from bank statements,” Burgess wrote in a blog post last week.  “The auditing firm does NOT look at whether the expenditure was lawful or not.”

No audit of Gambrell’s campaign finances was provided to Burgess.  And obviously Gambrell isn’t about to release any of his legislative emails, either. 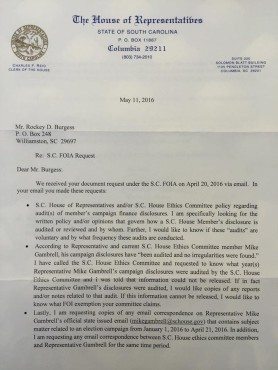 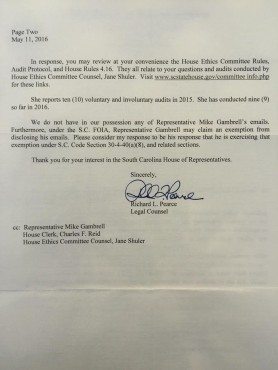 “I simply say – prove it,” Burgess wrote in his blog post.  “If there is nothing to hide, lay it out for your constituents.  They deserve to know the truth, not spin.  In addition to disclosing the audit reports, I would also ask that you disclose your emails that will prove that you were using your state issued email for campaign purposes in violation of the law.”

We didn’t view the allegations raised against Gambrell to be especially serious, but his “audit” claim – and the subsequent stonewalling in response to Burgess’ FOIA request – is worrisome.

The sad thing?  Until lawmakers stop policing themselves – and are held to the same disclosure standards as other government officials – taxpayers will never know.