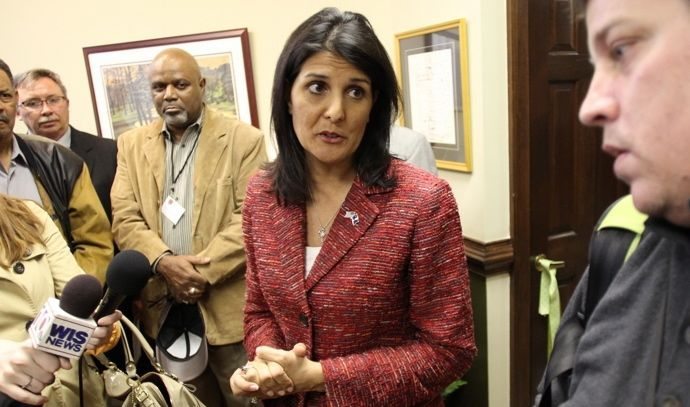 S.C. governor Nikki Haley‘s new political action committee – “A Great Day SC” – has raked in some serious out-of-state cash from a handful of wealthy donors, according to tax documents obtained by reporter Gavin Jackson of The (Charleston, S.C.) Post and Courier.

Haley’s PAC – which intends to impact state legislative races during the 2016 election cycle – has raised more than $500,000 this year.  Nearly half of that amount came from one donor – New Jersey-based health care executive Vivek Garipalli, who gave $250,000 on March 31 to the group.

Garipalli made news in 2012 when he drew the ire of billionaire industrialist David Koch.  What did he do to make Koch so angry?  Well, he purchased a mansion in Koch’s neighborhood in the Hamptons for “only” $11 million.  Koch was enraged that this “low” selling price would harm the value of his nearby mansion.

Koch and Garipalli are on the same team in the Palmetto State, though, as their money will likely flow to many of the same South Carolina legislative races (Koch is a benefactor of Americans for Prosperity, a group which has been active in the debate over a proposed gasoline tax increase).

In addition to Garipalli’s quarter-million dollar donation, Haley’s PAC also received a $100,000 check from Florida-based health care executive Raj Mantena.  He’s the guy who paid to fly Haley, her husband, her chief of staff and several others on his $22 million Cessna Citation X to a November 2010 meeting of the Republican Governors Association.  Mantena also flew Haley to a September 2010 fundraiser in Miami.

A maximum-dollar donor to Haley’s political campaigns, Mantena was also reportedly a major contributor to the South Carolina Center for Transforming Government – a group which has helped advance Haley’s agenda in the past.  He also gave $100,000 to the Movement Fund, Haley’s previous political action committee.

Haley’s PAC was forced to rely on big contributions from out-of-state donors because its efforts to solicit funds from Palmetto State businesses were rebuffed.  We’re told AT&T of South Carolina and several other major companies were asked to pony up – but refused.

Frankly, we’re not too concerned about Haley’s haul … in fact there’s a good chance the group, which is run by her longtime political advisor Tim Pearson, will wind up targeting some of the same lawmakers this website has repeatedly criticized in the past (like powerful S.C. Senate president Hugh Leatherman, for example).

Our only concern?  What Haley’s out-of-state health care donors want in exchange for their support of her agenda … because our guess is they aren’t giving out of the goodness of their hearts or any concern for our ass-backward banana republic.

After months of focusing on national politics, Haley has turned her attention back to South Carolina following the spectacular flameout of her 2016 presidential candidate, Marco Rubio.

Is that a good thing for the Palmetto State?  Eh …