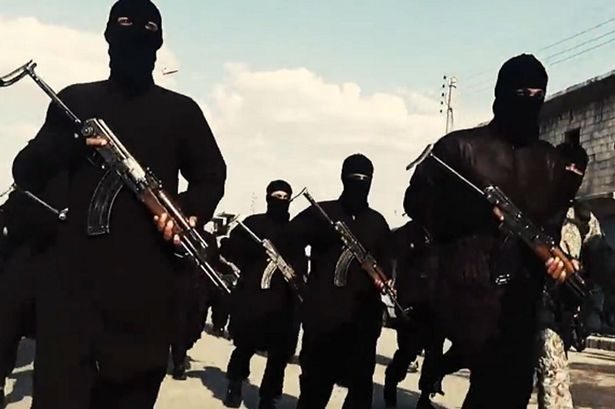 The caliphate declared in June of 2014 by Abu Bakr al-Baghdadi (a.k.a. “Ibrahim”) – leader of the Islamic State in Iraq and Syria (ISIS) – is shedding vast amounts of territory.  And shedding it fast.

According to a new report published by IHS Jane’s 360, “the tide of the war is turning against the Islamic State.”

“The Islamic State’s last major territorial advance into Palmyra and Ramadi in June 2015 came at the expense of losing large swathes of territory in northern Syria. These included the strategically important Tal Abyad border crossing, which was the group’s main crossing point between Turkey and the so-called Caliphate’s de-facto capital city of Raqqa.”

The report further concluded that analysts were “picking up indicators that the Islamic State was struggling financially, which included various tax hikes, increases in the cost of state-run services, and significant cuts of up to 50 percent in the salaries paid to Islamic State fighters.”

Hold up … a little over three months ago the administration of Barack Obama was briefed by government intelligence agents and told that ISIS was not contained.  In fact, U.S. intelligence concluded the caliphate was going to “spread worldwide and grow in numbers” unless it suffered quick territorial reversals.

What gives?  Was that report just propaganda for America’s ongoing “thirty-year-war” with ISIS?

Making matters even more confusing is the widely-held belief that ISIS’ territorial reversals have come as a result of Russia’s engagement in Syria.

Is that true? Reuters conducted an analysis of Russian defense ministry data which seems to suggest otherwise.  According to that report, only one out of five Russian airstrikes targeted ISIS.  The others, it appears, were intended to shore up the military position of Syrian president Bashar al-Assad.

“The effective work of our military created the conditions for the start of the peace process,” Russian president Vladimir Putin said.

Needless to say … all of this is very confusing.

What isn’t confusing?  America’s pathway forward in the Middle East.

We’ve said it before, we’ll say it again: Our government doesn’t have the money to subsidize another Middle Eastern invasion. Additionally, we don’t have the money to continue providing security to our “allies” in the region. And even if we did, by now it should be abundantly clear to policymakers that such interventions only spur the growth of radical Islam as opposed to curtailing it.  Not to mention leaving huge caches of weapons behind for them to pick up and use against us …

Our policy should be simple: “We agree to stop trying (and failing) to ‘make the world safe for democracy,’ and they agree to leave our democracy – such as it is – alone.  Or else.”

And yes, by “or else” we mean the sort of disproportionate response the Romans used to dole out when one of their citizens was harmed or threatened (assuming we don’t run out of bombs).