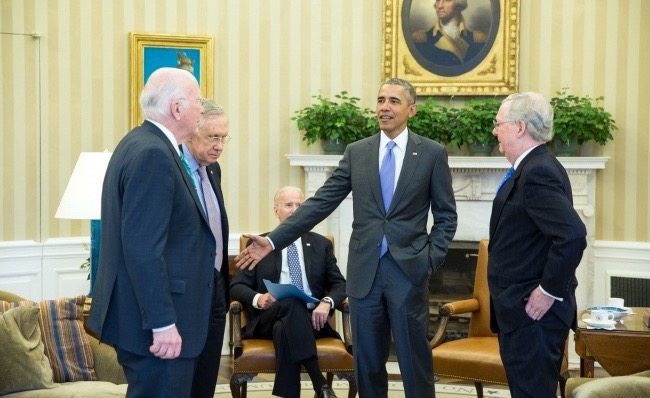 U.S. president Barack Obama has nominated the chief judge of the U.S. Court of Appeals to fill the vacancy on the U.S. Supreme Court created by the death of conservative icon Antonin Scalia last month.

Obama’s selection of 63-year-old Merrick Garland sets up a battle with “Republican” leaders in the U.S. Senate – who have vowed not to take up the nomination.

We support them in their effort – which as far as we can tell is the one and only time they appear to be serious about standing up to Obama.  Will they remain firm in their opposition now that Obama has called their bluff?

The mainstream media is hailing Garland as a “moderate,” while liberal U.S. Senators are referring to him as a “bipartisan” choice.  Meanwhile Garland himself pledged his fidelity to the rule of law – something Obama has shredded at his convenience since taking office in 2009.

An appointee of former president Bill Clinton, Garland has consistently ruled in favor of Washington bureaucrats – well, except when he was siding with liberal environmentalists.

“On environmental law, Judge Garland has in a number of cases favored contested EPA regulations and actions when challenged by industry, and in other cases he has accepted challenges brought by environmental groups,” a Newsweek review of his nomination noted.  “This is in fact the area in which Judge Garland has been most willing to disagree with agency action.”

Garland is also considered weak on Second Amendment rights – having voted to reconsider a ruling that struck down Washington, D.C.’s unconstitutional handgun ban.

Frankly, we don’t care where Garland is on the issues … this fight is about the man appointing him.

Whether Garland is the moderate the left claims he is – or the closet leftist we suspect he is – the GOP should stick to its guns (for once) and defer a hearing on his nomination.

“This just in, Lindsey Graham and John McCain are currently being treated for leg injuries after tripping over each-other in the race to confirm Garland and do their Master’s bidding, once again. It is expected that they will both make full recoveries.”

Frankly, we don’t care where Garland is on the issues … this fight is about the man appointing him.

This is another one of Longhorn Leghorns great strategery moves like “make him a one-term President” and cuddling up to the Tea Party. So no GOP input in anything for 7 years, and they get Trump. Boy, outside of the accent and the facial jowls, not sure the difference between McConnell and George Castanza.

“Frankly, we don’t care where Garland is on the issues … this fight is about the man appointing him.

Whether Garland is the moderate the left claims he is – or the closet leftist we suspect he is – the GOP should stick to its guns (for once) and defer a hearing on his nomination.”

How effing stupid. And, THIS is why we are screwed. A bunch of bi-partisan lemmings.

This after a dozen people said Hell No I don’t want it!

I read a tweet today that said Obama should have trolled the GOP and nominated Trump’s sister.

Man, I didn’t realize turkey neck was so much shorter than Obama. And ole Joe in the background, just plotting the attacks.

It looks like Harry’s staring at someone’s johnson and plotting his own attack.

The Republicans are just fucking up by the numbers this year.

Why wouldn’t a Republican support his fellow Republicans?

Don’t forget to bring your asbestos suits and what a party we’ll no doubt have down in… !!!

Take what you have now Republicans, Hillary’s pick is bound to be worse…

Flip kept smoking that loco weed until November came and the Section 8 Dimwit got a big ole rose
President Trump would be picking Scalia’s replacement and Killiary would be picking her nose !!!

Republicans are angry and their party is about to self-destruct,

The rest of the world knows a Trump presidency means America’s… !!!!!!

But when Killiary was trounced riding that black socialist
jackass…yep…Flip et. al. foolishly went along for the ride !!!

Word is that Obama picked his nose on Thursday and it is undeniably a natural fact
After seven years of black racism and 19 TRILLION in debt–a pick with the same impact !!!