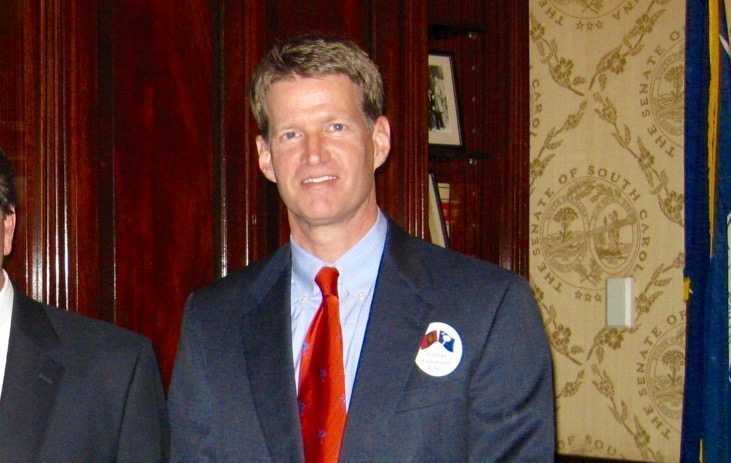 Another day, another liberal “Republican” S.C. Senator finds himself staring down a primary challenge …

This time it’s former Democrat Luke Rankin – who shed his party label (but not his left-leaning ideology) back in 2004.

Rankin’s opponent is a local financial planner by the name of Scott Pyle – an evangelical Christian who has reportedly been recruited to run in this spring’s “Republican” primary election by the S.C. Club for Growth (we did a post on their anti-incumbent machinations last week).

Similar saddle bags could potentially be unloaded on other targets …

Rankin, 53, has represented S.C. Senate District 33 (map here) since 1993.  Over that stretch he’s cast very few pro-freedom, pro-free market votes – either as a Democratic or a “Republican.”

Would Pyle be any better, though?

Good question.  According to our sources, he’s an organizer of a local Baptist “Beach Church” and leader of a men’s prayer group.  Which is fine – as long as he keeps his sanctimoniousness away from our government.

A bit worrisome?  We’re told Pyle has tangled on multiple occasions with good government activists on the South Carolina coast.  We’re also told he’s left more than a few unhappy clients in his wake at the various firms where he has plied his financial service wares.

At least fifteen of the state’s forty-six Senate districts will be contested in 2016 – most of them in “Republican” primaries.

It’s getting to the point where it is hard to like any of these people. Professional politicians are held in greater disdain any any other group. If anyone thinks any of them are in the “business” for your welfare and prosperity, you need think again.

This is the reason why people like Bernie Sanders and Donald Trump draw support. The voters have had enough of the same ole crap.

Many liberal pols are challenged by “conservative values.”

Scott Pyle? Evangelical christian? Who put that load of crap out? Ask him about his clients and his wife. You can’t make this stuff up.

“You can’t make this stuff up.”
Well actually, since you’re anonymous and you provide no evidence, you could make it up.

don’t just use slander BS, give the facts with evidence of proof……or keep the flytrap shut !!

Yo…Luke–Luke–you gutless flag-ripping puke–think the flag of patriots should come down WITHOUT letting us vote ?
Well don’t miss that this year there WILL be a Tea barbeque and–that’s right–ALL of you knee-jerkers WILL be the goat !!!

The constituents of South Carolina Senate District 33 have the opportunity to vote out liberal Luke. The liberal ideology shared with the Clintons and Obama have not worked out very well.

Both the South Carolina and Horry County Republican parties should do a better job supporting conservative interests. Recruiting liberal Democrats and supporting liberal ideologies quickly alienates members, who either go third party or do not vote at all.

Just out of curiosity, not a fan of Obama or Hillary mainly due to foreign policy, but what are you specifically referring to that hasn’t worked out well? Not saying you are necessarily wrong but am just curious about which policies you are referring to.

Scott Pyle-of-crap. Am I right?

Rankin is a low rent crook from Myrtle Beach home of “Crooks Inc.”
But, this character running against him may be worse.
We need another candidate that’s not a crook or a freak.