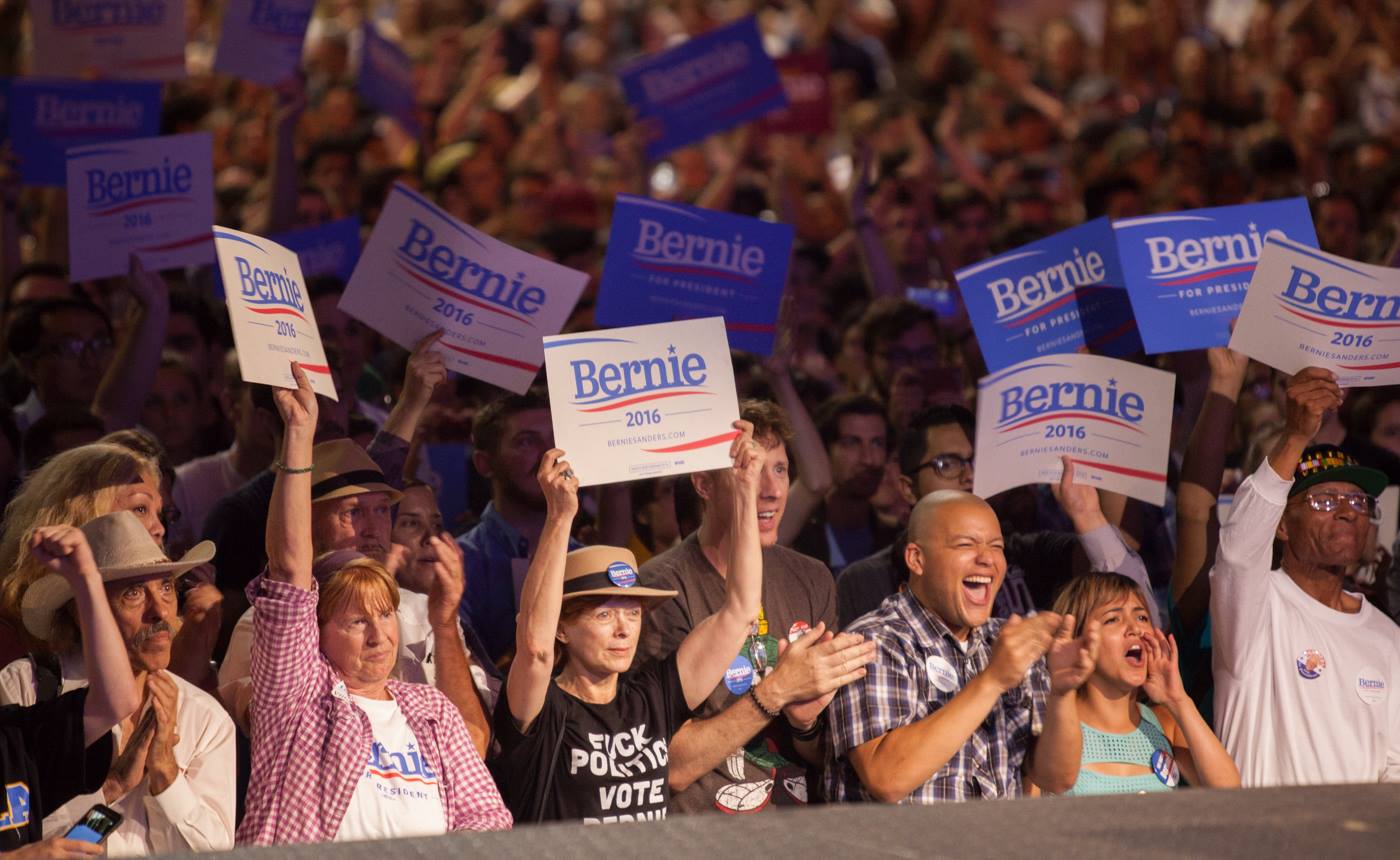 We previously explained socialism using the example of Bernie Sanders and Southeastern Conference football (see here for more on that).  But a property owner in Collinsville, Illinois has perhaps the best illustration of the concept we’ve ever seen.

The property owner in question took a Sanders’ yard sign, cut it in half and left behind the following message (ostensibly written by “vandals”).

I took half of your sign because you had one and I didn’t. I’m sure you understand. 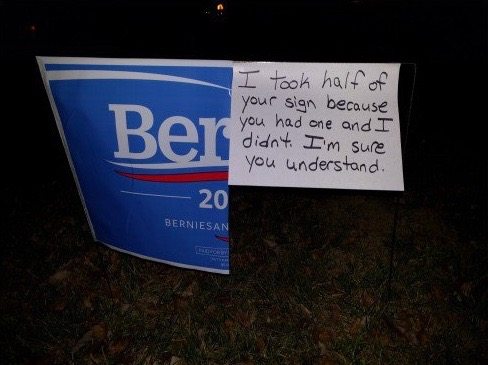 “Socialism: A great idea until it shows up in your front yard,” an accompanying meme noted.

Too funny (the sign/ meme, obviously … not the ideology).

While there are various forms of socialism, a common theme in all of them is collective ownership of property – and state control over the means of production.  Both of those are anathema to the private property rights ostensibly underpinning the free market system.

Good question … but it seems abundantly clear our country is moving in the wrong direction.

“The Donald” Heads Back To Myrtle Beach

Vote for Bernie, ignore Hillary.
“Better a schnook than a crook!”

That headline needs a little work.

Ahhh! She said work! I’m afraid of that!

I think its a better example of theft, and making humor of it. Calling card of the GOP.

I don’t think the view of capitalism that your first picture shows is an honest or accurate view at all. There is no perfect system and capitalism has glaring flaws just like all the other ones. One of the reasons we have laws is to try and eliminate some of those flaws.

What do you think of the crony capitalism image?

That’s funny because of your name

Socialism is not “tax and spend” or “government runs something” or any other thing. It is social ownership of the means of production.

Republicans proving their own ignorance yet again.

Sounds great until you get to about the last paragraph and a half. I have friends/co-workers from Ukraine, Belarus, Armenia, Georgia, and Russia. I would give almost anything to get you together at a dinner with them. It would be a eye opening experience for you. You can complicate it all you want but it all comes back to the ultra simple explanation.

I am not advocating socialism, simply stating what it is and that Bernie Sanders is not socialist.

As polls tighten and self-described socialist Bernie Sanders looks more like a serious contender than a novelty candidate for president, the liberal media elite have suddenly stopped calling him socialist. He’s now cleaned up as a “progressive” or “pragmatist.”

But he’s not even a socialist. He’s a communist.

Nice try pogo, but I don’t think you know the definition of either. Just vote for Trump and get back to your whites only clique.

You said it all Flip! Thanks

You can “flip” but you can’t hide.

Pilf put down your fathers penis and pick up a book.

Those nations are or were Communist nations. They are nothing like Canada, Norway, Denmark, Sweden, Australia, Great Britain, Germany, Denmark, etc. Those are the nations Sanders would point to as successful models. As I said above. All of those nations rank ahead of us in Forbes best countries for business.

The only difference between countries practicing socialized economics guided by democracy and Venezuela is that they haven’t yet run out of other people’s money.

It’s just a matter of time. Sure it might take decades, but it will happen.

The National Film Board of Canada, the country’s government-funded film producer, on Tuesday announced it will ensure at least half of its productions will be directed by women, and half of all production financing will go towards helping women tell their own stories.

For the whole story go to: http://www.hollywoodreporter.com/news/canada-bankrolling-more-female-directors-873546

The government decides something and attempts to force an industry to conform to it’s will. So after this is enacted some male producer will have an idea for a film but won’t get funding because there aren’t enough females making movies.

Hmm, Merriam and Webster would tend to disagree:

It isn’t my fault Merriam and Webster has a bad definition of it. I’ve already been over this with you before, if big government is required for socialism then why is there libertarian socialism or social anarchy?

Remind me again, where do either of those forms of government exist? In fact, where have they ever existed?

I’m only going at Sander’s word.

Idealist forms of governments don’t exist in the real world currently, that’s why they are idealist.

What’s libertarian socialism? Has anyone defined it.

Libertarianism was derived from leftist thought originally. What do you think?

While I am not a Sanders supporter, I agree with Flip that noting Sanders has ever proposed calls for government ownership of the means of production.

By the way all those nations rank ahead of the US in Forbes best countries for business.

And most if not all of those governments are slowly sliding away from socialism. Not unsurprisingly there also slinking away from allowing immigrants into their country gun control.

Does not change my premise. Sanders is suggesting we move in the direction of those nations. And no they are not moving away from the areas Sanders would propose we emulate. i.e. Health Care and Education.

In general those nations are more successful than we are. Their people are happier than our people, and they live longer than we do.

The rightwards slide of European nations is real in a lot of cases. Too bad for The Colonel that even that is far to the left of where America is.

Even the conservatives over there aren’t dumb enough to dismantle different programs. Maybe the fringe minority in UKIP, but that is it.

Sanders has specifically said he does not think the government should take over the means of production. He is a liberal, yes, but still a capitalist.

Yeah Ronald Reagan was a crypto Socialist by that definition.Making sure favored companies got lucrative government “contracts” so they could survive and prosper,while babbling on about the “free enterprise” system.

Reagan loved to give to the wealthy and yet he attacked Medicare. Shows you how bad of a crook he really was.

“It is social ownership of the means of production.”

What organization enacts the social ownership of the means of production? How is a social democrat different?

“What organization enacts the social ownership of the means of production?”

Depends on the type of socialism? Obviously in a social anarchy there would be no government to do it, so the people would have to do it themselves. Democratic socialism most likely the government would be heavily involved. Libertarian socialism minimally involved.

“How is a social democrat different?”

Bernie points to the Scandinavian countries as the way socialism should be. Those are actually social democracies. The government runs programs to better the poor and middle class, but the means of production is left in private hands, so it is still a capitalist system.

He’s demonstrating he doesn’t know what socialism or communism even is. It’s a great example of how terrible high school economics is.

Thanks, and Ellie Mae is approaching her few last days. She is fifteen years and six months old this month. Her hips and rear legs are just about gone. Don’t want to see her suffer. I’ll probably get her to the Vet in the next weeks. The dog in my avatar is not Ellie Mae. Ellie Mae was the reddish colored dog.
She’s been a good girl, hate to see her go, but fifteen and a half years is a nice full life for a dog.
Again, thanks for checking.

Good info, Buffee is 10 I think. I’m not sure if I want another after her death, whenever it maybe. What is your opinion ( what are you going to do, after) ?

I still have two dogs. Hercules is my Pug- Chihuahua, he is twelve, and then I have Holly Belle, the dog in my avatar, she is six. When those two are gone, I don’t think I’ll get another dog. I’ll be seventy-one in July and I could not imagine leaving dogs here. Hopefully, I will be around when they go, but, nothing is guaranteed.

all you free market assholes- corporate socialism with no taxes and subsidies for the multi nationals already exists here-you fuckers just don’t want the little guys to get it even slightly. As you sit in your trailers and make 20 large a year and vote republican even though are slaves to the Plantation South Carolina

It explains how the quality of American education has plummeted throughout the years. If socialism is so bad we should get rid of Medicare. Oh but then again the Republicans want to keep Medicare and repeal Obamacare right? Social security, WIC, food stamps, libraries are all socialist programs.

This is why you are seeing the Republican party in such turmoil because the conservatives in the party are seeing that they have not been paying enough attention. After eight years of the Organizer in Chief there have been a lot of very expensive changes made that will be hard to change. Conservatives are up set that their congress-critter has not been fighting to keep this from happening. Guys like John Boner and Lindsay Grahmnesty, and McCain and others have not only allowed but encouraged the progressive advances.

There is so much to say about this but the damn web page keeps taking me to the next story I had to back up 3 times while typing this. I am sure that this is a timer like the one on Drudge that resets the page every two minutes.

Actually, no. When Medicare was created, nobody (GOP or Dem) wanted that either — but as with so many gov’t policies, it was shoved down our throats. And a lot of people predicted that once Medicare was underway, we would ultimately end up with national health, and we are just about there. By the by, libraries are not a socialist program – they are gov’t funded, available to whoever wants to use them but not the only game in town, just like national parks.

The person who did that simply is a moron and has no understanding of democratic socialism or memes for that matter, Once Bernie is Potus they can go back to school and learn what real dank memes are.

Want to know what socialism is ? Take a look in Vietnam, China … social ! The government officers took people properties (land, house, car, bikes ….) and made them belong to their own !!! They set firewall to prevent people to go online, they get money from US aids to people into their pockets, they bought a lot of land right here in USA !!! You w?n’t believe what I’m saying just like us before, ….. until it shows up in your front yard !!! with guns , and get you out of your own property !!! You can use Google translate to read the link : http://www.voatiengviet.com/content/mot-phu-nu-khoa-than-de-giu-dat-bi-de-nghi-xu-phat-hanh-chinh/1215830.html

The biggest problem with Bernie is that he always preaches what people should get for free that they aren’t already getting but never gives anyone a clue how he would go about getting it. This is different from who he wants to get it from.

Sure you can have half of my sign, provided you need it. You are, after all, my fellow man. For God’s sake, literally.