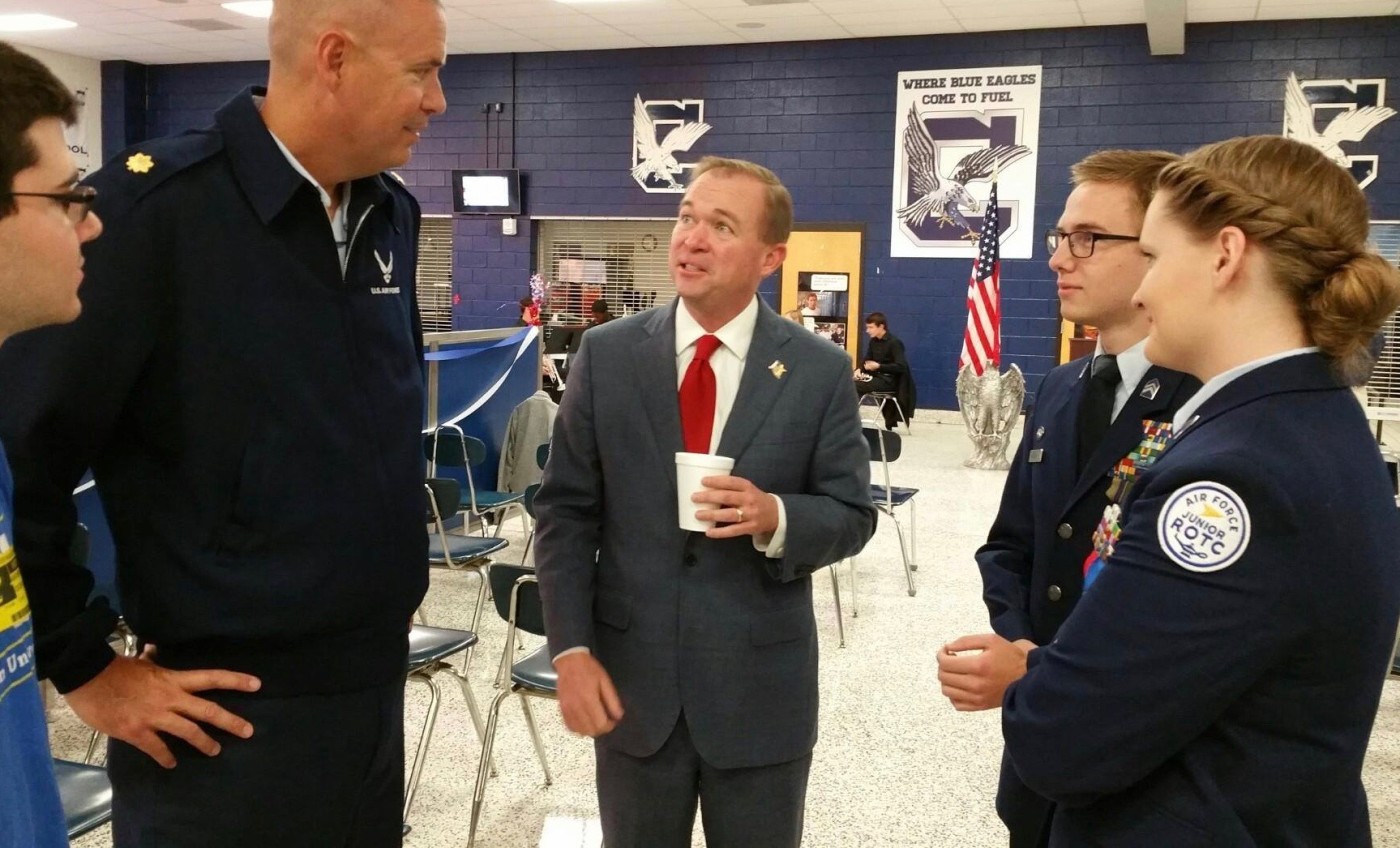 U.S. Rep. Mick Mulvaney used to get lots of love from this website.  Lately?  Not so much.

What happened?  Did we “turn” on him?  Or did he turn on you, the taxpayers?

From our vantage point Mulvaney – who unseated powerful Democrat John Spratt during the 2010 Tea Party election – has veered wildly toward the middle of the political spectrum in recent years.  In fact he’s basically become a card-carrying member of the “Republican” establishment in Washington, D.C. (which is full of people no better than the big government backer he defeated).

Anyway … Mulvaney was recently hit with a bout of pneumonia, forcing him to stay in bed for several days.  That time away from the establishment “bubble” appears to have done his brain some good.

… many of you know that I supported Rand Paul, and chose not to endorse anyone else after he got out of the GOP race. That isn’t what this is about. This isn’t about being for Trump, or against him. It is about defending the democratic process, and the ordinary people on whom it is built. It is about the larger message I am hearing out of the establishment leadership of my party whether they are elected officials, members of the donor class, or lobbyists.

And this is the message I am hearing: There really is a group of people at the head of my party who think they know best, that they are the “only adults” in the room. More disturbingly, they really do seem to think that is we would all just do what they say, everything would be fine. This concept of “we know better than the voters” is in large part what is driving Trump’s success in the first place.

And it both frightens and disgusts me.

Mitt Romney — and much of the Republican Party — still thinks that he lost the last election because of a “brutal primary” in which he was mortally wounded by in-fighting within the GOP. The Republican Party certainly bought into that story. Our “leaders” decided that what we needed to do in order to increase our chance this year was to change the primary system. Earlier conventions, fewer debates, different schedules. So, that is what we did. And still, somehow, we have Donald Trump.

I have another theory: Mitt lost because he was a lousy candidate who was uniquely and spectacularly incapable of spearheading the conservative challenge against what should have been the central issue of the 2012 campaign: Obamacare. He lost because he was exposed as being yet another big-government Republican. And while there absolutely were many important differences between Romney and Obama, the GOP cannot ignore that it is hard to rally the country — especially independent voters — to the conservative principle of limited government when your top salesman doesn’t believe what he is selling.

Mitt Romney didn’t lose because the primary system was broken. He lost because it worked. Don’t get me wrong, I’m not happy about that — as losing to Obama will be looked at a generation from now as we would have looked back on 1980 today if Carter had defeated Reagan — but it worked. It worked to bring out the facts about the various candidates, to showcase their strengths, and to expose their weaknesses.

That is what primaries are supposed to.

I have no idea what Donald Trump is. I don’t know if he is conservative or moderate … trustworthy or devious. And my guess is that most people that are supporting him don’t either. But here is the message I am getting from folks back home, Mitt: people think that, at the very least, he isn’t one of you. And that is enough for them.

It’s almost getting to the point where it is enough for me. I didn’t vote for Donald Trump, but if he wins enough delegates to earn our party’s nomination, I plan on supporting him. I wouldn’t support him if I thought he were a racist or an anarchist or mentally unfit to serve. But I don’t believe any of those things. I will support him because I believe that Hillary Clinton would certainly be worse as President. And I also believe that the system our Founding Fathers gave us can work to prevent any single person — be it Donald Trump or Mitt Romney or Hillary Clinton or Barack Obama — from screwing the country up too badly. Indeed, I worry less about one man or one woman in the White House ruining this country than I do the long-term influence of entrenched and self-aggrandizing political parties.

Either we trust the voters, or we don’t. We trust the primary systems, or we don’t. If you want an oligarchy, where elections are simply designed to apply a thin veneer of popular approval to candidates you have pre-determined for us — then have the nerve to say it.

And please recognize that, since 1992, what has been demanded from us small-government types in the GOP, after the big-government types won the primaries, was that we “unite for the good of the party.” Our tolerance for your childlike rants now that voters have kicked all your chosen candidates to the curb is zero.

Where’s that guy been?

Maybe it’s the anti-pneumonia drugs talking, but Mulvaney’s assessment of the tone deafness of the “Republican” establishment is dead-on.   And his assessment Mitt Romney‘s failed 2012 bid is similarly on-point.  Most encouraging from our perspective, though, is his reference to the inherent dangers associated with the “long-term influence of entrenched and self-aggrandizing political parties.”

That’s channeling the founding wisdom of U.S. president John Adams, who wrote in October 1870 that “there is nothing which I dread so much as a division of the republic into two great parties, each arranged under its leader, and concerting measures in opposition to each other.”

“This, in my humble apprehension, is to be dreaded as the greatest political evil under our Constitution,” he added.

Of course talk is cheap … Mulvaney needs to accompany this feisty rhetoric with the sort of principled pro-freedom, pro-free market advocacy he showed early on in his political career. If he can do that, then we’d be pleased to get back to praising him … and supporters of freedom and free markets would likely get back to supporting him.