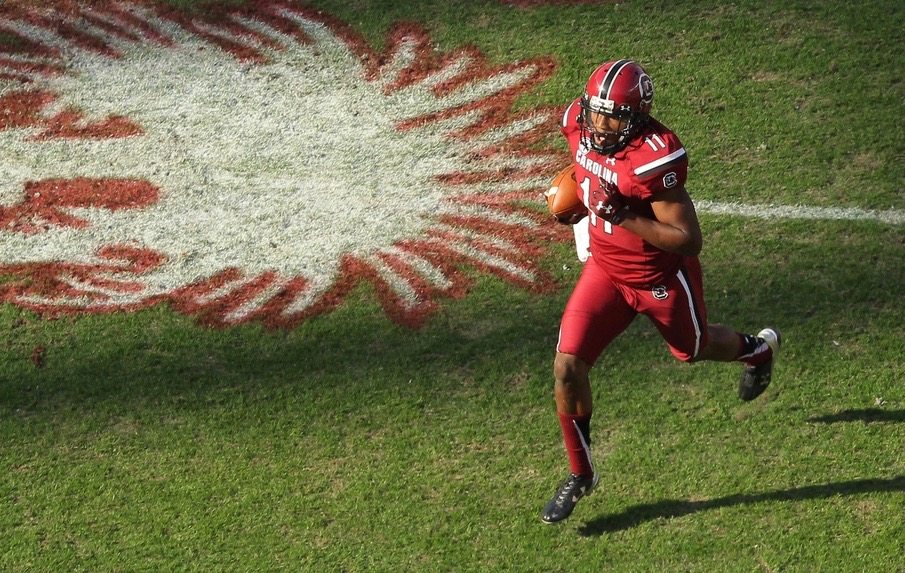 Even though he has two degrees from the University of South Carolina, helped create the cutest “Baby Gamecock” on the planet and has accumulated all sorts of fan points from the program’s many years of mediocrity – our founding editor Will Folks can’t seem to stop trolling the Gamecock Nation on Twitter.

His latest offering?  A tweet mocking the school’s 2016 recruiting class … which was replete with three-star talent and, as a result, ranked No. 27 nationally (as well as No. 10 in the Southeastern Conference and No. 4 in the SEC’s Eastern Division).

Readers quickly pointed out, though, that South Carolina’s top offensive star last year – wide receiver Pharoh Cooper – was a three-star talent.  Same with Clemson University’s star running back Wayne Gallman, and former defensive standout Vic Beasley – who was taken by the Atlanta Falcons with the No. 8 pick in the 2015 NFL draft.

Beasley wasn’t the only three-star player to go high in last year’s draft – the No. 3 (quarterback Marcus Mariota), No. 5 (offensive lineman Brandon Scherff), No. 7 (wide receiver Kevin White) and No. 11 (cornerback Trae Waynes) picks were all three-star players in high school.

Only one of the top twelve picks – No. 1 overall selection Jameis Winston – was a five-star high school prospect.

NCAA Division I-A (a.k.a. FBS) colleges sign nearly 3,000 players a year – of which only around three dozen are five-star talents. The vast majority of them are three-star – even two-star – recruits.

Here’s the thing, though … while there is certainly no science to recruiting (and no guarantee top talent will manifest itself consistently on the field), there is no denying that starting off with more, better-rated players improves the likelihood of a program’s success.

In the Palmetto State, this is a documented fact. Clemson has consistently landed Top Ten classes over the last few years under affable head coach Dabo Swinney, while South Carolina’s recruiting success has fallen off dramatically since 2010. Hell, Clemson finished with the No. 8 class in America this year even after missing out on No. 1 overall pick Rashan Gary.

The result? The Tigers made it all the way to the national championship game last season while the Gamecock program took a second consecutive step in the wrong direction.

Even though we trolled our founding editor’s alma mater a little bit, though, first-year Gamecock head coach Will Muschamp and his new staff deserve tremendous credit for salvaging what could have been a truly disastrous situation. South Carolina’s program has a long way to go – but having a pair of national “recruiters of the year” ready to hit the trail is reassuring.