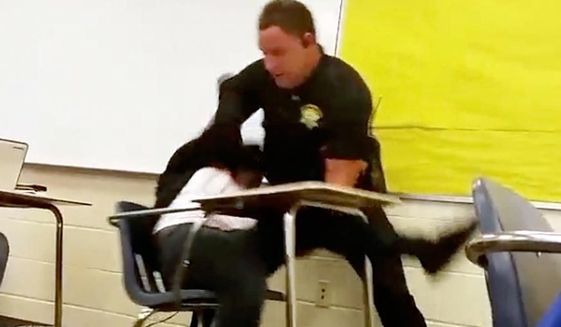 THE LATEST FROM RICHLAND COUNTY …

A student at Spring Valley High School who took one of the eyewitness videos of this week’s violent arrest of a black female student by a white male police officer is … defending the deputy?

Cell phone videos taken Monday by students at Spring Valley High School showed Fields grabbing the female student, flipping her out of her chair and dragging her across the floor as other students sat in stunned silence.

Yet according to the student’s interview with WLTX, the cell phone cameras – including his own camera – didn’t capture the whole story.

“I honestly think that it was a two way thing and the officer was wrong, but also the girl was wrong,” the student told WLTX’s Loren Thomas.

The student added that he “wanted to at least take some of the pressure off of (Fields).”

“I’m shocked that something like this happened with students disrespecting elders and law enforcement,” the student told Thomas.  “They are a higher power, the least you could do is respect them and follow orders.”

As we originally reported, the dispute began when the female student refused to put away her cell phone.

Fields – who was previously honored by Richland County School District Two as an “exceptional role model” – has been banned from setting foot on district property pending the outcome of an investigation into the incident.