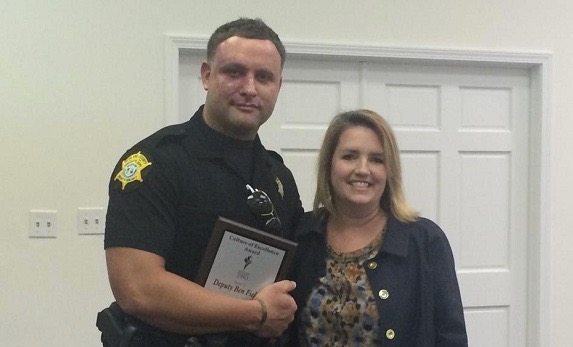 The white, male Richland County (S.C.) sheriff’s deputy who violently arrested a black female teenager at Spring Valley High School this week was recently given an award by the school district where he works.

According to the district, Fields “has proven to be an exceptional role model to the students he serves and protects” since being assigned to the district in 2008.

The award was presented to Fields at Lonnie B. Nelson elementary school last November 12.  It was later referenced in a February/ March 2015 issue (.pdf here) of The Deputy, a Richland County Sheriff’s Department (RCSD) newsletter.

Cell phone videos taken Monday by students at Spring Valley High School showed Fields grabbing the female student, flipping her out of her chair and dragging her across the floor as other students sat in stunned silence.

Richland County sheriff Leon Lott initially defended Fields, but has since said through a spokesman he was “very disturbed” by what he saw on the cell phone videos.

Fields has been barred from setting foot on district property while this week’s incident is investigated.