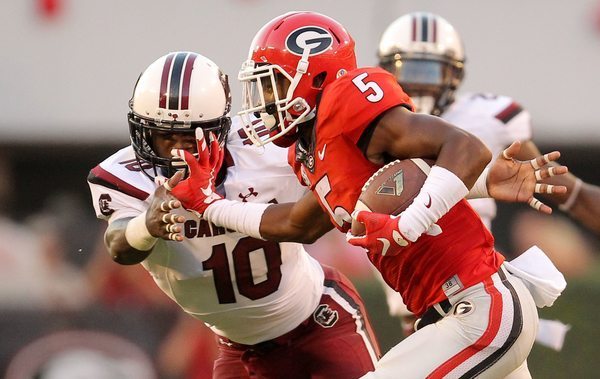 || By FITSNEWS || Two years removed from the No. 4 ranking in the land, the University of South Carolina was mercilessly savaged between the hedges in Athens, Georgia – a defeat eerily reminiscent of the 52-28 impalement the then-No. 9 Gamecocks absorbed at home a year ago against Texas A&M. 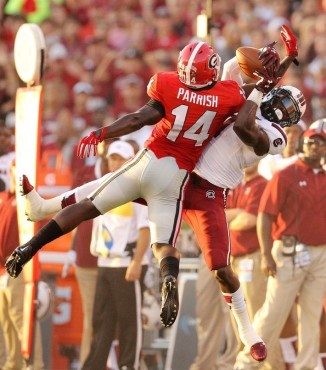 Lambert broke the previous single game mark set by Tennessee’s Tee Martin – who completed 23 of 24 passes against South Carolina in 1998.

As was the case last season, the undoing of the Gamecocks (1-2, 0-2 SEC) against Georgia was their porous defense – which gave up nearly ten yards per play and forced third downs on only four occasions.

So much for all the junior college talent that was supposed to plug in the many holes on “D” from last season – and so much for bringing in longtime NFL assistant Jon Hoke to serve as co-defensive coordinator with the much-maligned Lorenzo Ward, who should have been run out of town on a rail last season.

After settling for a field goal on their opening drive, Georgia scored touchdowns on its next five marches downfield – and wasn’t forced to punt until the fourth quarter when the game was out of reach.

Georgia’s Heisman Trophy hopeful Nick Chubb – who made headlines earlier in the week by suggesting Spurrier didn’t go the extra mile in recruiting him – carried the ball 21 times for 159 yards and two touchdowns.  Backup Sony Michel toted the rock eight times for 51 yards and another score. 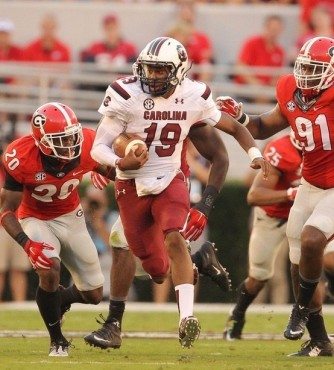 The only bright spot for Spurrier’s squad?  The play of true freshman quarterback Lorenzo Nunez – who ran the option offense extremely effectively.  Nunez rushed for 76 yards on ten carries – including a late touchdown scamper.  He also completed four of five passes for 18 yards.

Who will start for South Carolina at quarterback next week against Central Florida?

With no defense, though, it won’t matter.

Prior to Saturday’s evisceration, South Carolina had taken four of the last five from Georgia – including last year’s narrow escape at home.  The Bulldogs now enjoy a 48-18-2 advantage in the all-time series, while Spurrier fell to 5-6 against Georgia during his tenure as the Gamecocks’ head coach.